This is the second time I've seen Train live. I caught their show at the Calvin Theatre in Northampton last year. It was an in the moment  decision, but I'm glad that I went. The show shined with its new album, 'Save Me San Francisco,' mixed with favorites from their multiple records, and added some great covers of classic rock hits from Van Halen and Led Zeppelin. Who wouldn't want a re-run of that?

This year, touring with the same album, 'Save Me San Francisco' is still a strong record.  They added bonus tracks, won a Grammy for the live version of Hey Soul Sister and recorded a holiday song for Coke. I wasn't sure if the set list and performance would have changed from 2010. Had it stayed the same, I would have been very happy. But like a rock locomotive, Train is gaining momentum. They teamed up with Maroon 5 for this leg of their summer tour, but I side stepped that line-up because I wanted to see them in a smaller venue as I did in 2010. 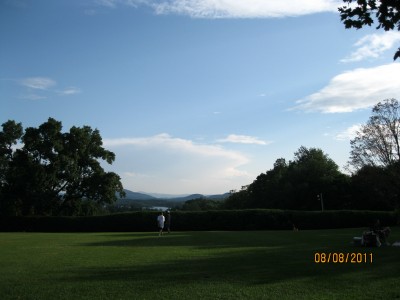 This show started with a different feel, a broader audience, because the Tanglewood Music Center is home to the Boston Symphony Orchestra in the summer months. Nestled in Lenox,  the Berkshires of Western Massachusetts, it is picturesque with rolling mountains and vistas. The lawn area is pristine with ample facilities for guests, while they are enjoying the music and atmosphere. The area is deluged with talented musicians, casually walking around with cellos and violins, while patrons adorn their picnic blankets with real bud vases, champagne and spotless silverware. One of the readers on my Facebook page said, "TRAIN ? At Tanglewood?"

It was a beautifully cool summer evening. There was a lot of excitement on the lawn as followers were getting ready for the show. Everyone was curious. How could a rock band settle itself on the grounds of a classical music venue ? 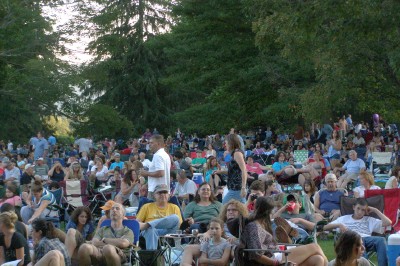 There are lawn seats at Tanglewood and shed seats. The shed seats are on a level floor with front and rear sections. The rear sections have video screens with live feeds from the stage. The front sections in the shed did not have this video access. The lawn seat patrons were gathered around the shed with their own video screens posted in many directions. 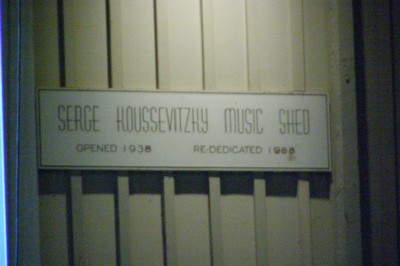 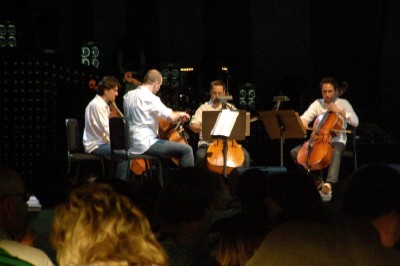 The performance opened on time with The Boston Cello Quartet, playing Parachute via violin, The Waltz of the Black Ants, which was written for them and The (ever famous) Flight of the Bumblebees (which I just heard live on flaming electric guitar recently by Jennifer Batten). Marry Me followed and was lovely. They described a set that they did as a "Mozart Sandwich" where they layered Mozart with other pieces and it was truly fantastic (and tasty!) They performed a medley of popular classical music; The Lone Ranger, James Bond, Jaws, The Can-Can, and people were really diggin it. They finished the set with a burning blues number that tore it up with the harp. These classically trained musicians were elegantly explosive, richous-ly rockin and equally as excited to be there as we were. 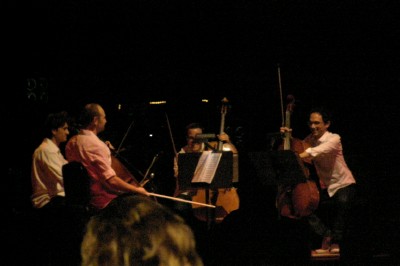 There was a loudspeaker which blared the whistle of a locomotive Train at the start of the show segments. It was a creative way to get the crowd going, very subtle, yet very Train.

The band came out right away with Parachute from their latest album. They went into If It's Love, which really energized the crowd. I don't know if the show was sold out, but it certainly seemed like it by the way the fans were on their feet and rushing toward any hint of Pat Monahan. "Are you out there Lenox, Mass?" Then he took a photo of the crowd and 'tweeted' it back to them. "You guys live in the most beautiful place on the planet!" Then he made a silly comment about a man's geeky dance moves and went into Meet Virginia from their first album. "Do you remember this one?" 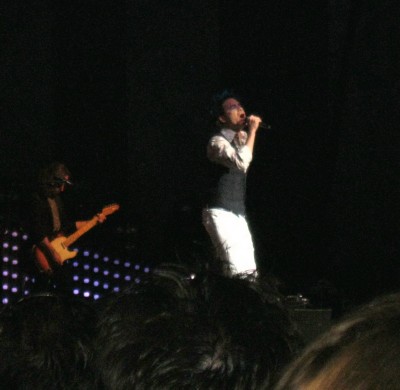 He payed special tribute to the guitarist, who was quite spectacular along with the rest of the band. Monahan gets A LOT of attention from the crowd, and the band backs him up seamlessly. The music is almost album perfect, with some creative twists. 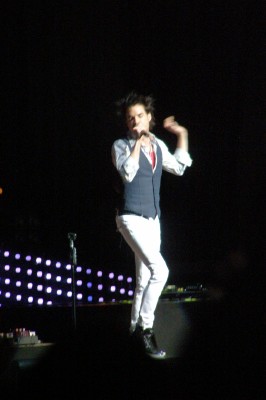 She's On Fire, started with Monahan announcing a jamming solo from Jimmy and made the song have a country sound. Pat has such a great sense of humor with the crowd, he was giving out stuff from the stage and then offered a guitar and jokingly took it away. (No, he was not really going to give away a guitar !) He did give someone a cowboy hat, took it back, autographed it and gave it to the fan with a smile. 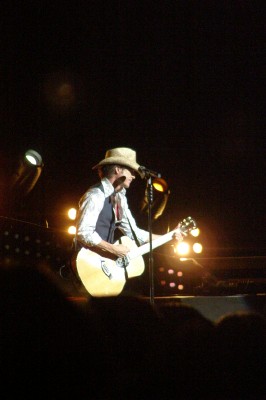 What I loved about Pat Monahan ? His crazy hair and patent leather high top SNEAKERS ! 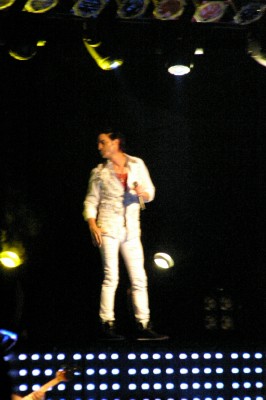 I remembered from the last show, The Trainettes. I assume they do this skit at every show and they should, because it really gets the crowd involved. Why not have some men Trainettes ? You could call them Conductors? You could have a singing competition between Trainettes and Conductors !

Anyway, they gathered several women and girls from the crowd and brought them up onto the stage. Five of them got to have official T-R-A-I-N t-shirts, the rest were there for singing and dancing. One woman was so excited, when Pat asked her where she was from all she could do was scream. He said, "Really ? You're from AAAAaaaa- !?" "Is that in Massachusetts?"  Here is a video of the classic sing a long, "She's On Fire" with the Tanglewood Trainettes!

The lights went down lower to quiet the crowd and we got a great listen to Calling All Angels. Most people love this song and it has been around for a long time. People have different versions of what it means and I guess that is the point of it. At the last show, Pat said it was a song written for his best friend.

There was a costume and set shift and Monahan came out in a red bolero jacket with maracas ? 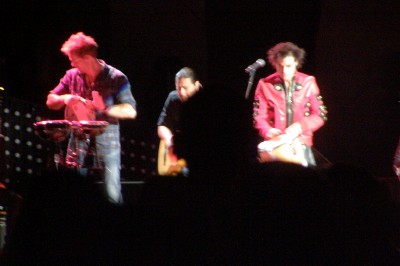 The Train interpretations of various cover songs is something I was looking forward to. They do great mashups of various artists and I am always surprised and delighted. From Deborah Harry's Glass to U2's Still Haven't Found What I'm Looking For, it was a great set. A beautiful woman came out and danced with Monahan in a type of tango which was really festive, and spiced up the grounds of this earthy New England town.

Pat Monahan was the lead singer of a Zeppelin cover band before he started Train. The last time I saw Train, he let out a few Robert Plant wails, and later in the set did a dreamy version of Ramble On. Tonight he belted the signature, "Way Down Inside!" But no Zeppelin ! I know his leadership of that band was long long ago, but he is soooo gooood at Plant wails, that I don't think these covers should be dropped from the set. I'd trade a signature cowboy hat for Monahan singing any Zeppelin song again live - maybe.

There is a bonus track on Save Me San Francisco called Umbrella. It was originally done by Rihanna. It was ok and well done, with a cute opener that the song will bring joy to the world or something, but Monahan's vocals are so rich with rock and blues, so versatile, I think his voice is better suited to more ballad like songs.

The stage went dark. "I've been high-I've been low-I've been yes and I've been ... " Save Me San Francisco ! He commented at doesn't it feel great to yell, "Oh Hell No?" By then, no one was in their seats, lawn people were probably hanging from the ceiling and the aisles were full of people dancing and just trying to get as close as they could to all the excitement. Pat spun around with helicopter arms, leaping in his black patent leather sneakers and just seemed to love the crowd and energy that was shared. 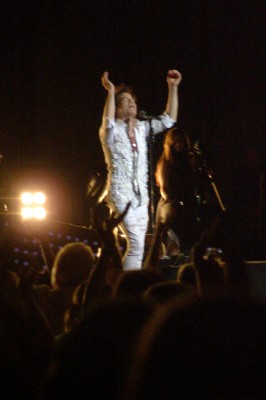 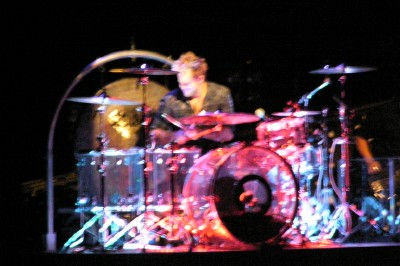 Then he stopped and took off his shirt - ! And put on a white shirt, saying, "This is my wedding gown ..." "Don't beat me up and don't call me short !" And off he went, singing Marry Me while he literally walked through almost every section of the crowd still singing and smiling the whole time. The audience was on him like a beehive, swarming around him as security held people at a distance. It looked like the poor guy was getting arrested the way that security had to hold him and direct him to the next section !

"Now that we're married, let's party!" The award winning Hey Soul Sister blared out and somehow, this song is part of our culture now. People like the simplicity of it, but the humorous and endearing lyrics keep us lighthearted. The references to the 80's pop one hit wonders and radio/stereo lingo doesn't leave anyone out, but may leave the younger generation guessing.

They finished their set with You Already Know, Drops of Jupiter, and This Ain't Goodbye, promising to return to Tanglewood every summer.

The most important thing Pat Monahan said tonight was that Train "will go and make a new record" this year. A talented band with a great vocalist and fantastic live show, I will be returning to see Train every year as well. 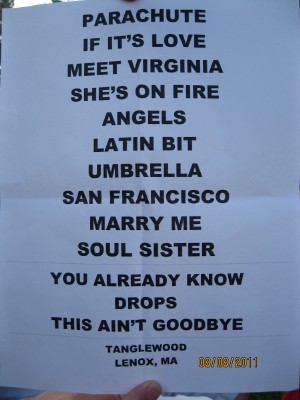