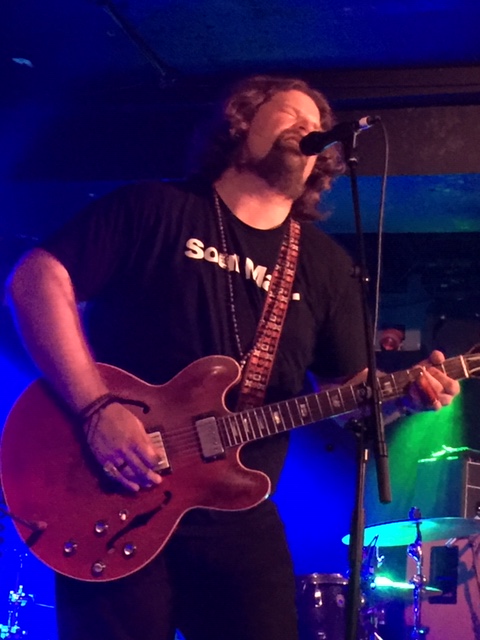 Often an old saying like "What you see is what you get" is not applicable in the music business. There are too many sad stories, out there, related to music artists that have tried (and still do) to sell to their fans for years an image or an idea of musical purity of themselves that isn't true, until they show their real (and not very nicely sounding) musical skin through lacklustre live performances of said artists.

Thankfully and on the other end, there are still, in these days and age, few highly skilled musicians that believe in their instincts, to the magic of improvisation and sonic free-flow solely dictated by their souls and by their visions.

The American guitarist and singer/songwriter JD Simo certainly belongs to that aforementioned and unique group of music artists, somebody that is not certainly afraid of letting his soul and the unconditional love for music to fly free in the skies of Music, without any constriction.

As part of the artist's ongoing European Tour in support of Simo's highly inspired solo debut album released early this year and called Off At 11, the Guitar Supremo landed in the UK capital at The Underworld club with his band, which includes his long time fellow friend and musician Adam Abrashoff on drums plus the enchanting and very talented bass player Andraleia Buch.

The artist born Jeffrey Daniel Simo is not new to his English fans, especially after the incredible reception and love that he got with his previous project called simply Simo and two truly inspired records like Let Love Show The Way and Rise & Shine, in recent times.

From the moment that Simo and his band come on stage, the American guitarist gets the complete attention of every single fan present at the club, thanks to a remarkable sonic kaleidoscope where Soul, Psychedelia, Funk, Acid/Rock and Blues speak all the same language through Simo's remarkable artistry as a guitarist and also as a singer.

It is no coincidence that Simo himself is sporting on stage a black shirt with the words Soul Man printed on it. Tonight's whole performance is indeed all about a man and a musician's soul, that very same soul that takes Simo to explore all the different highways of his musicianship just as he has done from Day One of his career, always maintaining that integrity and that immediacy that makes him one of the most loved and respected musicians worldwide, including his fellow friend artists.

There are countless moments, during this remarkable live performance, of Simo's uncontainable talent. From the devastating Psychedelia bursting from the song called People Say to the smooth, soulful and emotionally gripping I Want Love, where Simo's vocal delivery reaches such an intensity comparable only to the same depth of legendary singers like Bill Withers or Otis Redding, the whole show never ceases to surprise, enchant and entertain the crowd with an all around performance level of the highest standards.

Supported on stage by one of the finest and tightest Rhythm Section currently on the Blues/Rock scene, with Abrashofff and Buch providing a superb wall of sound to Simo's stratospheric guitar riffs, it's not surprising that even few covers of artists like Blind Willie Johnson (Soul Of A Man, with a tantalizing psychedelic twist in the second part of the song) and The Beatles (With A Little Help From My Friends, where Simo echoes marvelously more the Joe Cocker's version of the classic through an explosive vocal performance) get a first class musical treatment from Simo & Co.

The sole Encore of this wonderful evening of music encompasses in full the idea of creating the art of music, according to JD Simo. The 7-plus minutes of the instrumental psychedelic improvisation that closes the show incorporate all the elements of each musician's skills and craftmanship, with Simo and Abrashoff often exchanging big smiles of happiness for tonight's outstanding performance.

The guitarist and singer/songwriter is one of those very rare artists that has the capacity to bring to his fans bags of energy, love, lyrical positivism and create a connection with them through his insane, multifaceted talent, as tonight's show in London amply demonstrated. The future of that splendid art that is music is in safe hands, with JD Simo!