I had the honor of attending a private show of Jennifer Batten in Keene, NH, on June 18, 2011. The show was coordinated and hosted by Bob Cummings and Lisa Kendall, with the Musical Admiration Society of Keene, (NH). This group, or 'MASK' as their acronym, are musician enthusiasts who gather in Bob and Lisa's beautiful Colonial home and invite local and nationally known musicians to play for small audiences. Their motto is, "because live music is to be played in the living room." Find out more about the MASK here: https://www.facebook.com/pages/The-Musical-Admiration-Society-of-Keene/171827189509971?sk=wall&filter=12

And here is some free advertising for "Effie's Goodies", with a shout out to Effie Sorrentino. The red velvet whoopie pies were out of this world ! www.chalogias.com 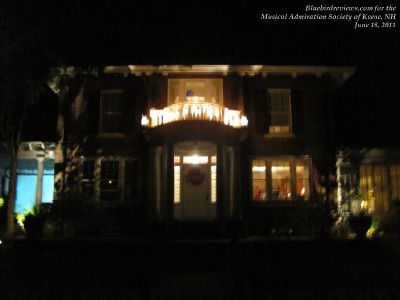 Jennifer is a master guitarist releasing three solo albums, extensive session work and famous pairings with Michael Jackson and Jeff Beck. The following bio information was taken from her website as well as listening to the album recordings :

"Above Below and Beyond", produced by Stevie Wonder guitarist, Michael Sembello, shows Jennifer's wide range of music knowledge and diverse genres are evident in this first album. She has some original songs, plus reinterpretations of classics from Otis Redding, Michael Jackson, and John Coltrane.

"Jennifer Batten's Tribal Rage-Momentum" is a global music album. The mix of exotic instruments include African percussion, Australian didgeridoo, Caribbean steel drums and Scottish bag pipes. The diverse arrangements along with Batten's steel hand at the guitar, create a vibe of world music with a rock edge.

Her third CD/DVD entitled "Whatever" ventures into electronica, vocal samples, and film. She's supporting this release with a multimedia one woman show, playing guitar in synch with films projected onto a giant screen. The companion DVD includes over 90 min of art films, previously unreleased music videos, interviews, commentary, and an innovative guitar lesson.

Jennifer was chosen among hundreds of guitarists to play with Michael Jackson live. She supported him on the following tours; Bad, Dangerous and HIStory. She also joined Jackson on stage for the Superbowl XXVII's performance. At this show, she shared personal stories of touring with the King of Pop, as well as stunning performances of their work together.

Albums and Tours with Jeff Beck:

Jennifer Batten and Jeff Beck worked together on the CD, "Who Else?" as well as "You Had It Coming," both of which were followed by world tours.

Jennifer told us during the show that she performed "Lover" in honor of Les Paul's induction to the Rock Hall of Fame. He was 92 years old at the time.

Jennifer opened her show with a film of Shirley Temple to the tune of Billy Jean. Then she switched over with a nod to the blues/gospel singer Sister Rosetta Tharpe's "Up Above My Head" to lead us into her performance. The symbolism of this is striking, because her intelligence in the music world, the way she navigates it, intensely learns it,  teaches it, performs it, is far beyond our grasp, and indeed, "Up Above [Our] Head(s)."

In addition to her superb guitar compositions and technical arrangments which support her solo performances, she told us that she can spend 50 hours a week or more in creating and editing the movies which accompany her songs. 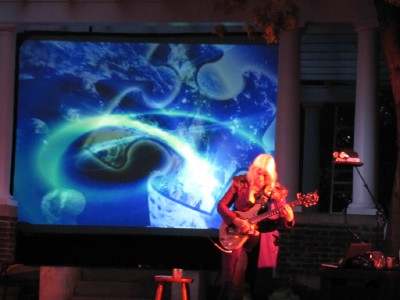 I had a neurology professor tell our class that in people who are true geniuses, their brain generalizes connections from one center to another. If they are brilliant at one thing, they are likely to be brilliant at many things, and probably anything, that they attempt. Jennifer's guitar work is fast, eclectic, intense and immensely creative. She makes it look very easy, though, because she simultaneously pairs it with a video that projects thousands of images on the wall, each one relevant to the theme she is expressing AND the tone of the guitar notes she is playing.

One of her first pieces had a funny story behind it. She played the first track of her third album, "Whatever." Her song, "Ass Whoopin-" which I thought was a take on an old blues track turned out to be something completely different. It was a shout out to an electronics company for selling her ineffective equipment and charging her a 15% restocking fee. The moral of the story is never anger a woman with a wha wha pedal ! 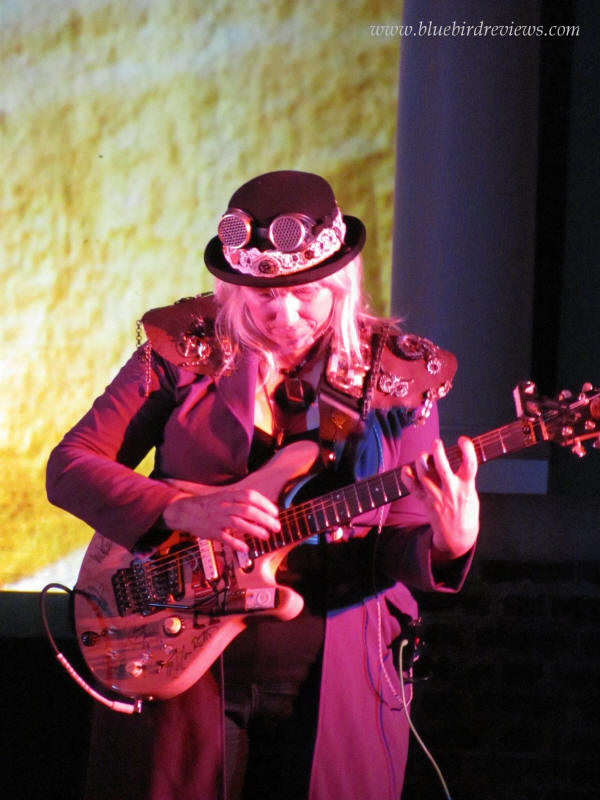 She also played "Ricochet" from the same album and "Cruzin the Nile" from her first album. During "Cruzin the Nile," she said, "let's go to Egypt" and really created an atmosphere of mystery with exotic images that matched the world music sensation she was producing.

"Any cat lovers in the house?" She shared a story of how she has two cats and eventually built them a 'cat-io,'  inviting us to 'squeal along if you choose." So in addition to being a master guitarist, music historian and solo movie creator, editor and producer, she also has a hand at carpentry? (Of course!)

Here is a piece from her solo album entitled, "Cat Fight" from her first album, "Above, Below and Beyond". At its closing, she goes into a brief discussion about the works of Les Paul. I love how she entitles these master guitarists, including herself, "noise freaks." Her down to earth conversation with the audience makes the world of music production tangible and accessible. 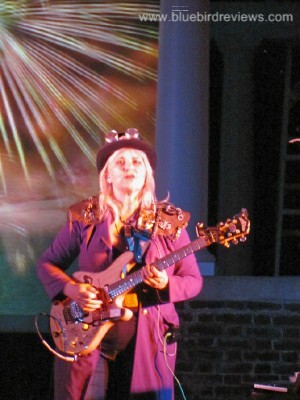 Jennifer Batten, seems to be always thinking, creating and designing experiences which reach beyond what even the seasoned music listener can conjure up. Just when you think you can expect what she will do next, as you're enjoying a lovely "Lover" tribute to Les Paul, she soars into 'Flight of the Bumblebees."

Jennifer has produced several covers and performed an eclectic wailing journey into "I Am the Walrus" by the Beatles. Don't sing along, though, as she warned us, she finds that, "annoying". After hearing her playing such creative pieces, I agreed with her, because you want to catch every angle that she directs her arrangements without your neighbor belting out karaoke.

There were several Michael Jackson fans at the show, myself included. She introduced this section of her show with a video of Bill Bailey 'doing the moonwalk' several decades before Michael Jackson did it to a Count Basie performance. Her music history knowledge was just incredible. There was a fedora wearing fan at this show and I can't imagine she would have been disappointed. Here's a clip of her medley of Michael Jackson songs, Jennifer style.

Personally, Jennifer is warm, funny and speaks to the level of the listener. Mid-show she opened the floor for questions and answers and seemed to enjoy the exploration of various topics and banter. She shared personal stories of her touring with Michael Jackson and how she met and performed with Jeff Beck. Her performances that night were brilliantly arranged, creatively delivered, and show how talented she is in many ways. She is also witty and irreverent in ways that surprise and delight.

I was able to meet Jennifer before the show, but I kept it brief as she is such a wealth of music knowledge, all I wanted to do was listen! She does spend a lot of time with fans, answering questions, signing autographs and will answer literally any inquiry you can conjure up. The best way to experience Jennifer Batten's style is to find a way to see her. She is on the road this summer and her dates are posted on her website. If she isn't playing in your area, you can write to her and invite her to perform for a large group. http://www.batten.com

I didn't catch footage of her songs with Jeff Beck, but this is one of my favorites !