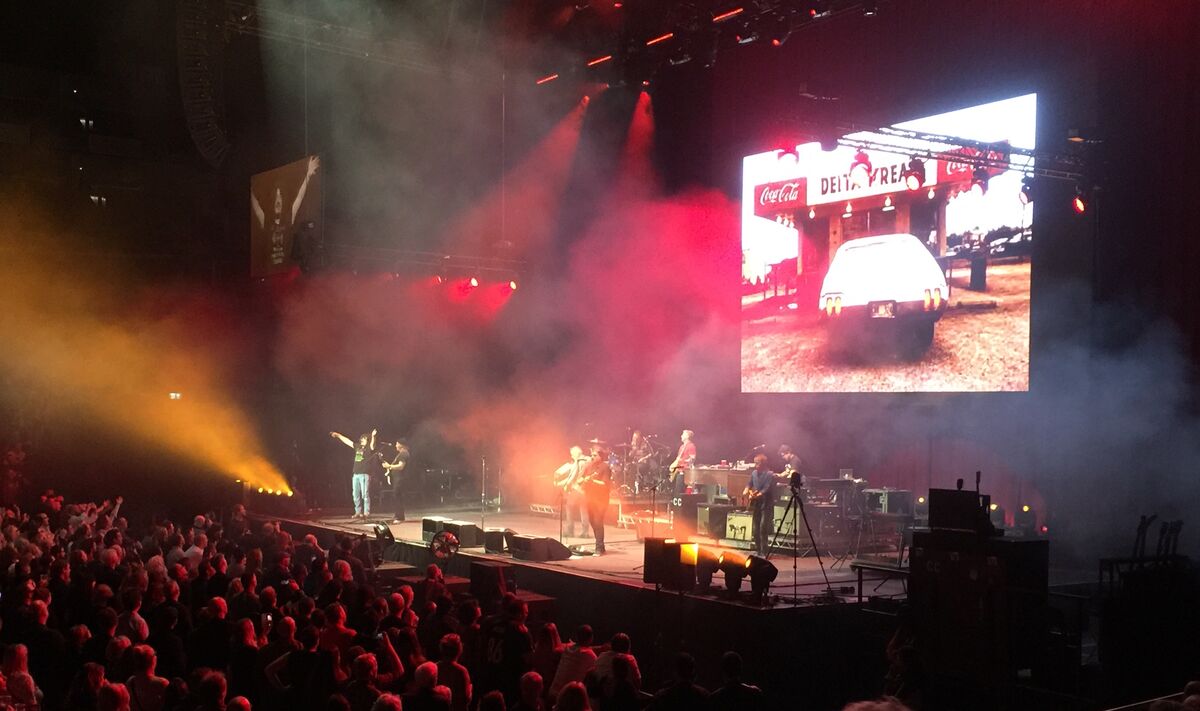 Among the many musical events that take place every year in the capital of the United Kingdom, it is wonderful to see how an event like the BluesFest gets (deservedly) all the success and the audience that year after year, confirm this beautiful music festival as one of the top musical events in London.

In a 4-days event that counted a line-up full of world-famous artists including, among many others, musicians of great stature such as Robert Plant, Robert Cray, John Fogerty, Van Morrison and Beth Hart, to name a few, the BluesFest 2018 Sunday's Great Finale was going to be one to remember, thanks to the presence of one of the undisputed queens of Bluegrass like Alison Krauss and, last but not least, as headliners of the final night of the BluesFest, the American band Counting Crows, currently on Tour celebrating their 25-years anniversary in the music scene.

Alison Krauss has, as always, displayed great class and talent in a live set of about 70 minutes, where the Illinois-born artist, accompanied by a very talented band made by members of the Union Station (the band that accompanied the American artist very often in Tour since the late '80s) and by Sidney and Suzanne Cox of the band The Cox Family, has brought on stage a performance of great emotional impact, confirming once again to be one of the absolute stars of the Bluegrass genre worldwide.

At exactly 20.50 in the evening, while the crowd was waiting impatiently for the arrival of the Counting Crows on stage, a roar comes from the huge crowd when the lights go out and the first notes of Mrs.Porter's Lullaby echo in the warm London atmosphere at the O2 Arena tonight, despite the external weather relatively cold.

But tonight, inside one of the greatest musical structures of the English capital, nobody can feel any cold at all; Adam Duritz, singer, pianist and front-man of the American band, despite a slight vocal tiredness that will emerge especially in the second part of the Counting Crows concert tonight, leads the Counting Crows with absolute confidence on stage, delving in the complete songbook of Counting Crows career, especially into the American band's debut album dated 1993, August And Everything After, through songs that marked the career of this seminal band like Omaha, Round Here, Hard Candy and Rain King,

Maybe it was the fact that tonight was the last date of the band's 25-year long Celebration Tour combined with a bit of tiredness on Duritz's vocal chords, that may perhaps justify the disappointing performance of one of the most famous hits of the American band, Mr. Jones, which, however, did not affect the enthusiasm of the many fans present here tonight at all.

Between an unexpected cover of a song by Teenage Fanclub called Start Again, a song that the band often uses in sound-checks before their concerts and Duritz trying to work, at times, the crowd for a bit too long with spoken monologues during the performance of some of their songs, the emotional gem of this intense final evening of the BluesFest remains a song that is part of the band's second album (Recovering The Satellites) called A Long December, where the essence of the typical sound of Counting Crows merges beautifully with the extraordinary melodies created by Duritz's voice and his lyrics (.....I can't remember all the times I tried to tell myself to hold on these moments as they pass....)..

When the notes of Holiday In Spain, the last of the Encore of the American band, slowly fade out in the sky of this starry night in London, the unanimous impression of the crowd leaving the Arena is that the Counting Crows have succeeded, through these 100 minutes on stage, to stop over their 25 years of career for one night only through their songs, their stories, their melodies and their musical compactness with extraordinary and unique elegance. The BluesFest 2018 could not finish any better than this.