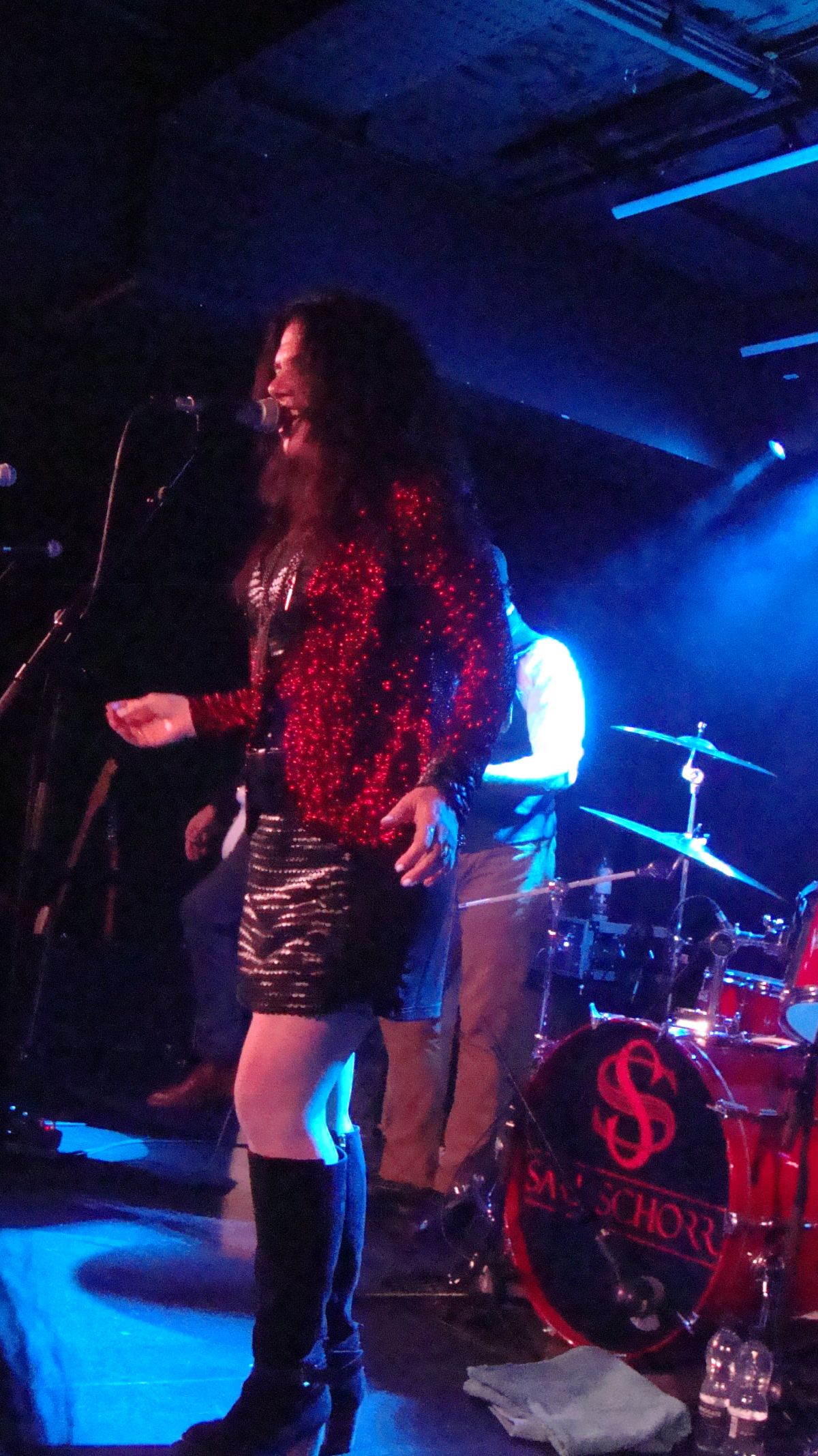 There is always something a bit more special in watching someone like the American singer/songwriter Sari Schorr performing live. Every show from this amazing artist comes always with everything and even more you may possibly expect from a concert. It is not just the notoriously thunderous and impressive quality of Schorr's vocals or the depth of emotional intensity that constantly emerge from her songs but there is also a unique human factor that shines through any of Sari Schorr's live performances, something that put the American artist always on a higher pedestal in comparison to other artists.

One can always perceive honesty and disarming sincerity in her vocal delivery, almost feeling like the emotions expressed through Sari Schorr's lyrics may as well come from the same place in our hearts, like a silent empathy between the artist and our own life's journey.

The aforementioned feeling is something that was palpably noticeable on the faces of the artist's many fans that came numerous to see Schorr's concert in the heart of London, UK,  at the historical and jam-packed venue called The Borderline.

The concert really felt like a special occasion, as it most likely meant to be in its original purpose. With a brand new album called Never Say Never, due to be released on 5th October and soon to be reviewed by our website, tonight's show (and Schorr's current Tour in general) was the perfect platform for the American singer/songwriter to present to her fans an album that has got all the attributes to become not just a classic, in Schorr's discography but also one of the strongest albums for this very musically rich 2018.

The expectations are big, at The Borderline and there is a palpable feeling of trepidation running between the fans in finding out how Sari Schorr will be sounding live, in 2018, after the great reception the American artist had received in many countries in Europe, including UK, when her debut album Force Of Nature was released. 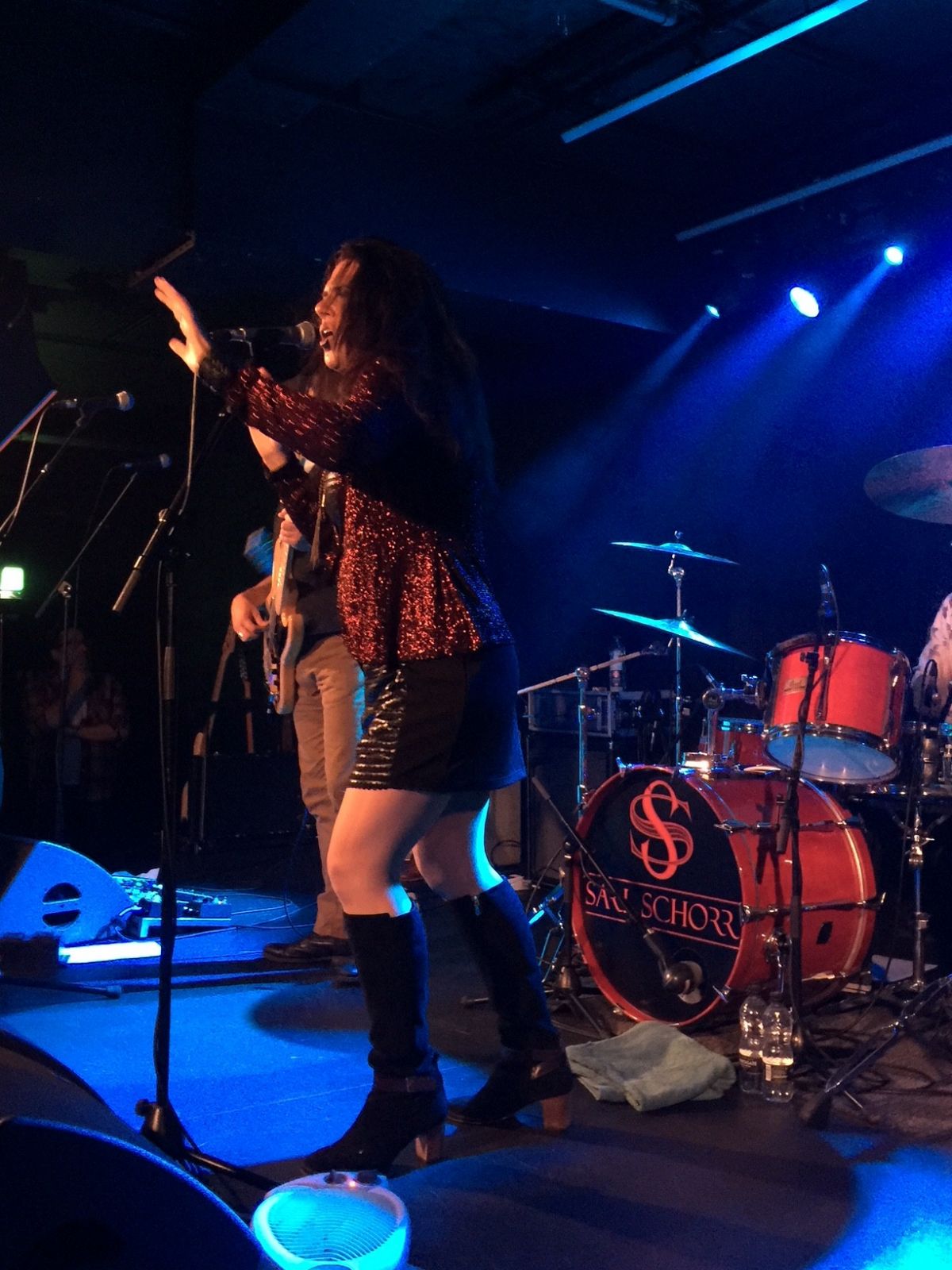 At precisely 8.30pm, following an entertaining opening set by Mike Vernon & The Mighty Combo, Sari Schorr and her brand new band, which has started touring with Schorr towards the end of the previous Force Of Nature Tour, come on stage, welcomed by the fans through an incredibly enthusiastic ovation.

What will follow, it will be Sari Schorr as you have never seen her or heard her before. The 90-minutes set that Yours Truly and the crowd will look at is pure dynamite, musically, lyrically and, above all, vocally.

In a set-list that will alternate songs from the forthcoming Never Say Never album together with some others from the previous one (Force Of Nature), Schorr will not try and save an ounce of her energy and her voice for the whole duration of the show, giving it all, as she normally does.
What emerges straight away is that the new album has a definite more contemporary rock style, in comparison with Schorr's previous record, judging by the opening numbers played on stage. The artist's new band, made by highly skilled musicians like Bob Fridzema on keyboards, Ash Wilson on electric guitar, Mat Beable on bass and Roy Martin on drums, have certainly done a brilliant job in supporting live and in studio an artist whose album promises to be one of the revelations of 2018.

The new songs King Of Rock And Roll and The New Revolution shake The Borderline big time, with a crowd that cannot stop themselves by dancing and clapping. The swagger, the killer aggression in Schorr's voice and the lyrical depth of the two tracks (they are both homages to public figures that have made a huge impact in Schorr's life, guitarist Robert Johnson and Martin Luther King) display a performer at her very best, from an artistic point of view and a personal one.

The singer/songwriter's relationship with the United Kingdom is unique. Her record label is an English one (Manhaton Records), the whole of the band touring and recording with Schorr are all English musicians (apart of the Dutch Fridzema, who by the way spend more time in Uk than The Netherland) and the United Kingdom has been the first European Country where Schorr made her first, big artistic solo artist breakthrough. In view of this strong bond with the country, the American artist will thank fans and record label few times, throughout the show for believing in and supporting her, but, quite frankly, who in the world wouldn't appreciate the commitment, skills, love and dedication to music that Schorr displays every time?

There are a couple of songs from the forthcoming Never Say Never album that will strike a particularly emotional chord with the fans, on tonight's show, called Ready For Love and Valentina.

The first, a Bad Company's cover, is a song very close to the heart of the American artist, so much so that almost the entirety of the song will be sang by Schorr with her eyes closed, with the crowd maintaining almost a religious silence throughout the song.

Valentina is a tune that feels very personal to Schorr too, a song that the artist explains to the crowd as being "The expression of an alter-ego that has for too long suffered in silence". The strength and the passion of Schorr's vocal delivery on some of the lyrics (.....Your pretty face is hard to replace.... Valentina, say goodbye...) will be one of the many highlights of a truly incredible show.

When it is time to close the curtains, the crowd cannot let this amazing artist go without an Encore, to which Sari Schorr happily obliged to. Lead Belly's Black Betty and Aunt Hazel, from Schorr's debut album, end the show on the same high level of artistic intensity that the American singer/songwriter has injected throughout the whole performance, with the fans still incredulous for what they have witnessed tonight at The Borderline; a show of galactic proportions of class and energy, performed by one of the most talented female artists out there right now.