Details
Written by Whitey
Published: May 23 2011

Zebra at BB KINGS rocked last night! The 3 piece band of Randy Jackson on guitar and vocal, Felix Hanemann on bass, keyboards, and vocals, and Guy Gelso on drums and vocals delivered a fantastic show. The first time i ever saw Zebra was around 83. Ive seen them a couple of times over the last 25 yrs and they never fail to rock out a great show. 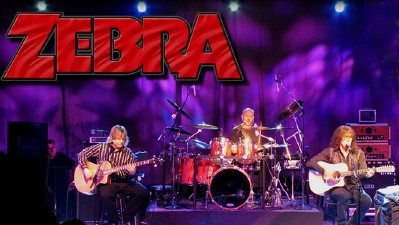 They opened with 'When You Get There' . Randy hit the vocals like it was back in the day. They went into 'Wait Until The Summers Gone' off the second album. They played a few songs off the 3rd and 4th album next. They just nailed every part like the songs were brand new. One More Chance, The La La Song , Bears, Take Your Fingers From My Hair, Who's Behind The Door and Tell Me What You Want. It was about a 2 hour set.

Randy Jackson played a 12 string to set off Who's Behind The Door that blew me away. Guy did a drum solo in the middle of the set to remind us of just how much he rocks. Their set ended with Tell Me What You Want. It was filled with great guitar work and killer vocals by Randy, driving bass and melodic keys and vocals by Felix, and great drum work by Guy.

They took a brief break and then came out to do a bonus Zep set. Zebra has always been known for great Zep covers. They opened it with a great version of  "The Immigrant Song", then " Black Dog". Randy nails Plant good as well as Page. "Rock n Roll" was next and then, "Celebration Day" The crowd was on fire really getting into the Zep set. Randy did a part of "White Summer" and went into "Kashmir" and rocked it !! Randy sat on a stool again alone with his 12 string and played "Thats the Way".

I couldn't even believe he plays these songs on guitar as well as sings them at the same time. Then "Heartbreaker" that had a blues jam in the middle. They finished up with "Whole Lotta Love"  The Zep set was about an hour long. Randy Jackson just ripped his guitar up. He still nails his signature high vocal parts. Age and time has only appeared to befriend ZEBRA. Was a great show and I'm glad I got to be there.

And as I always say,  To those of you who thought it was a better idea to stay at home and watch TV on a Saturday night ... WHAT THE HELL WERE YOU THINKING?!?!?!?