Joe Louis Walker beckoned music fans of all ages to the Iron Horse Music Hall twice this year. How lucky we are for such  fortune! His award winning blues talent attracts people from all over the globe through word of mouth and legend.  The New York blues man and recording artist has played with Jimi Hendrix, BB King, and recorded with countless A list artists. At the Iron Horse, brought blues, soul, funk, and old school gospel, to the full house. When Joe Louis Walker enters a venue, it's immediately - his house.

The last time he was in town, we got snowed out driving to the venue, but Walker's show went on. It was heartbreaking to have missed him! Later in the year, Gio Pilato wrote up his new Mascot Label record, "Everybody Wants A Piece"   with rave reviews. We were determined not to miss him this time around.

Joe Louis Walker is from Poughkeepsie. Ironically, my friends tonight, were also from Poughkeepsie. They were so enthralled by his prior performance at The Falcon in Marlborough, NY, that they drove three hours to see him again in Northampton, MA.

They said one of the best things about seeing Joe Louis Walker were all of the stories he told on stage. In their fan opinion, the best song from the last show they reveled was, "Soldier For Jesus." While waiting for Mr. Walker, these die hard jazz and blues expert friends had some stories to share themselves. We enjoyed a fun dinner, endless fries, delicious BBC beer and chatted away about blues and jazz history. Did we have any "Alligator Wine?" Screaming Jaw Hawkins was a topic of conversation, with Omar and The Howlers not too far behind. The early blues work of 50 years were mused in the flash of an hour, starting with discussion of The Blues Project from Brooklyn, which Joe Louis Walker had mentioned in prior shows, working in a super session with music intellects, Mike Bloomfield and Al Cooper. Stories of the Filmore were spoken, until Eva Cappelli called our attention to the stage.

Eva Cappelli is impressive. The self proclaimed Diva is bold in her stage presence and no nonsense guitar licks. Her gritty, Janis Joplin strong vocals were backed by The (fabulous) Watershops Band. She played original tunes and some tributes. Nailing a great set, Eva was invited back with Joe Louis Walker and the band for the big finale at the end of the show.

Joe Louis came out strong with historic blues rock n roll tunes like "Train Kept A Rollin'". This man has every type of genre history in his DNA, and he uses this knowledge to spin tracks of his own creation. Walker never strays from the solid basics of great music that will stand the test of time.The 1901 Fisk Jubilee spiritual tune, "Wade In the Water" was redesigned by Joe Louis for his new record, "Everybody Wants A Piece". He stepped it up with some funk and soul rhythms, to make the stunning freedom icon a dance-able tune. We were moved. The keys added a great retro funk to the sound.

Walker played many songs from his new record and it kept the crowd rocking with surprise and curiosity. Mixed in were some Motown sounds, funk riffs from the keys, and jams on the guitar with bass frames that could stand alone. "Don't Let Go" was an upbeat diddy, followed by some step to the side choreography with the band. "Sweet Soul Music" is a gold standard that seems to be in the fabric of our culture now, and JLW played it as his own. The song my JLW friends had been waiting for, however, was "Soldier For Jesus":

During the show, the bass player announced some marketing points about the band. If you want to get to know Joe Louis Walker, visit his website. I am not saying this in obligation, but there is a lot to understand about this artist that we won't even get to in one show or record review. He said he wants you to follow him around, and it's clear that any music fan who understands quality gigs will easily fall in line. "Witchcraft" was a gem, sparkling, dark and intriguing, with just enough twist and turn to spin our heads. Speaking of spin, JLW announced through his trusty bass player, that his new record is on vinyl. Now we all know that vinyl is cool, so what are you waiting for? 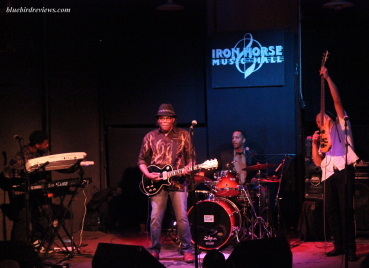 Giving that it was New Year's Day, Mr. Walker chatted with us about Christmas and gifts. He reminisced about his Lionel train set. He said he had to be pulled away from it in order to get here in time for the show.  A little story about the Taj Mahal and then Mr. Walker was off to a set including "Do I Love Her". The keys and the Mini Moog from the song brought expert funk talent to the set. Just like those classic Lionel trains, some things can't be bought, faked or replaced.

Joe Louis Walker channeled Muddy Waters' Chicago blues and showed big swagga with "Young Girls Blues." This brought a big two-handed guitar solo, with an ear to ear grin from Walker and the band. Forever humble, he actually apologized to the crowd for 'being a bit rusty,' because he had not played in 5 weeks. This made us all laugh, because he was sounding better than ever.  Joe Louis turned 66 on Christmas Day, and said when he turned 50, he had lived in England and played in Brighton. He got a rise from the crowd, when he talked about his experience with (Fleetwood Mac) blues founder, Peter Green. His UK influence was now apparent, if you listen closely you can hear a little Kink's "Destroyer" in his performance. The encore jam invited Eva Cappelli to the stage. "I woke up this morning" sent us home with a little walking blues.

The night was filled with blues riffs, stories, Howlin' Wolf spirit, and one house rockin crowd. Joe Louis Walker raised the Iron Horse and brought it to church. If you are a rock fan, a blues fan, a soul or funk historian, you really can't miss a Joe Louis Walker show. The energy, artistry and history integrated in the music, was only matched by Joe Louis Walker's impeccable sense of humility and generosity with the crowd. Mr. Walker waited for the fans after the show, sitting quietly with his wife in the wooden chairs in front of the venue. He was happy to sign our records and CDs and chatted away, but seemed a little shy. He was humble, hoping we all gave him a good review. Thank you, Mr. Walker for visiting our town again, you are cherished, and we look forward to seeing you soon!

Eva Cappelli (and The Watershops Band)