Langhorne Slim and Ryan Lauder at the Iron Horse Dec. 2, 2010

Ryan Lauder came all the way from Scotland and landed in Burlington, VT. He bought a guitar and with his clean, crystal voice endeared the Iron Horse crowd with a seven song set that was a perfect segway for Langhorne Slim tonight. Lauder's voice bellowed what he called 'romantic' ballads that were sad, intense and whisper strong. Rose and Crown was as endearing as it was technical. http://www.youtube.com/watch?v=iBnXr8EYzxY

He took to the banjo, and then Jeff Ratner and David  Moore joined him on to the stage, treating us to a song together. They really jammed http://www.youtube.com/watch?v=25DE4ngGIR8 The last song "I see my reflection in you" had some great guitar slides and showed he is quite a well rounded musician. Come again to our strange land, Mr. Lauder! 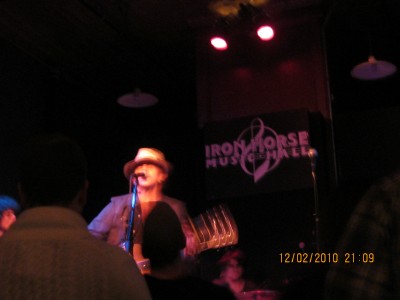 Langhorne started shortly after and greeted the crowd with graciousness as usual. He played a new song and then went on with a different set list than earlier this year. "Restless" was quiet and its sounds floated through the crowd so gently that someone asked him to play it again mid-show! A late comer, perhaps, still greeted with courtesy by Langhorne. He introduced Jeff Ratner and they did a little back and forth on the stage together.

The full band was introduced during "Honey Pie". David Moore, Malachi DeLorenzo, and Jeff Ratner make an amazing combination of artists, each strong in their own talent and with Langhorne are a genre that music fans are still trying to name. "Are You Ready?" and "In the Midnight" elevated the already psyched crowd, bringing more to their feet.

"Colette" http://www.youtube.com/watch?v=EiRH2_IQkvA This standard speaks for itself everytime. Legendary.

He extended "I Love You But Good-Bye" with more guitar work to open it and additional prelude lyrics. Stunning in any version. http://www.youtube.com/watch?v=Y_u_jzE_9ek

"For a Little While" was brought to the forefront from his new album "Be Set Free". I hate to spoil the surprise for the upcoming shows, but there was a remarkable twist in the delivery of this song. Langhorne started out with an acoustic take on it and at the end the band quietly filed on to the stage and blasted out the last part. This is present on the recording as well, but on the recording there is still the band woven in and out. Live, the contrast of the acoustic to full band within the same song really blew us out of any subliminal water that may have existed in the room.

Toward the end of the set, he played "Lord." I have listened to this song and hoped he'd play it live again during the last two shows. You can't get more blue in the lyrics than "Lord". Like the preacher beckoning the faithful, he makes his angst public. It is a remarkable masterpiece. Tonight the pace was faster,  more melodic and I felt like he held back a bit. But he's out there singing "Lord" and people are diggin it. Slow it down, Langhorne, sing "Lord" like you wrote it, we're not going anywhere. How about "My Future?"

"Cinderella" was particularly solid tonight. Malachi DeLorenzo spent some quality time on the drums and I think we can call it a drum solo, yes. http://www.youtube.com/watch?v=N1KjVm4rX9I He really is a fantastic drummer and puts everything he's got into the foundation and delivery of these complicated songs. Having recently been to John Bonham's tribute from his son, Jason, the drummer world needs more rising stars.

I think the Iron Horse is a great venue to showcase Langhorne Slim and the Law (Band). The comfort of the tables, access to good food and easy reach dance floor is a nice combination of choices for fans. The tightest collared shirt in the house was doing the funky amoeba dance by the end of the night.

I've reviewed Langhorne Slim three times this year. Are you a follower yet ? Is anyone reading these reviews and taking the time to catch these shows? Northampton gurus; Don't stop your life to go to another yoga class. Instead, get to a Langhorne show and you will be a happier person, I promise you.  It is amazing to watch the new fans turn into followers before your very eyes. I wonder if the band sees this transition too. I will keep writing as long as Langhorne keeps playing. I've been studying the Delta blues this year, listening to Snooks Eaglin on my way to work, Blind Willie Johnson while washing my dishes and find myself hopeful that Slim will be the next generation of folk and blues.

Rebel Side of Heaven

I Love You, But Good-bye

For A Little While (acoustic/then band)

I Need Your Lovin