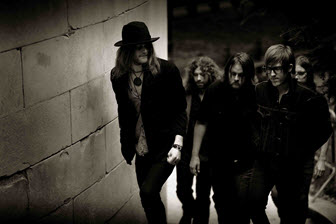 Rock and Roll Rocks the Boat!!!

We've all been to rock and roll shows. Most of us have been to huge arenas, medium size stadiums, small intimate clubs, casino showrooms, many places to see a show. Tonight was different. Tonight was something new. Tonight was outstanding rock and roll on a ship! I didn't really research the venue before going, just knew that it was a boat cruise with my absolute favorite new band Alberta Cross being supported by another band called the London Souls. It just so happened that I was in town for Jason Bonham's Led Zeppelin experience already but even if I wasn't I would not miss Alberta Cross. Wild horses... as they say.

When I got there I was surprised. Really surprised. This wasn't just a boat. This is sort of a mini cruise ship, with stage, dance floor, great lighting and a lot of great seating to view the band. You could watch from either side, jam out on the dance floor or go up top and look down from above. Great views for all. It's also a great location, right next to the Intrepid on the Henry Hudson Parkway on the west side of Manhattan! Just a few blocks from Times Square, the Empire State Building and many many other world class tourist destinations.

The food was great. Compared to most rock and roll concerts this was the crème de la crème. Quick, easy, affordable. Real food, not just frozen burgers they have at most shows. Several bars throughout the venue for the to get a rockin'. Reasonable prices considering the locale.

The first band, the London Souls were excellent. Never heard of them before, but they really impressed. It's a three-man group:
Tash Neal - Guitar/Vocals
Kiyoshi Matsuyama - Bass/Vocals
Christ Saint - Drums/Vocals

Each one of them really jammed. The lead guitarist wails so hard its almost like watching one of those old flicker movies. His outrageously spectacular flurries of notes were just amazingly impressive. When I say fast.... The drummer was also on fire, combined with the booming bassline these guys really rocked the crowd. They had a pretty large following considering they've only been together a few years. I could see them being really big one day. Remember you heard it here!

Between shows was a nice walk out on the deck. Talk about a venue. How about instead of standing in long lines at the loo or the merchandise booth being able to walk outside and have the Statue of Liberty right smack in front of you. The amazing city lights surrounding us from both sides of the bay made it all even that much more spectacular. I've been to venues with a view, but this was truly different. Truly one to remember and to recommend to those you love.
.
And now to Alberta Cross. This band has it all. They are a very blues/rock oriented with an incredible lineup of talent:
Petter Ericson Stakee - vocals, guitar
Terry Wolfers - bass guitar
Sam Kearney - lead guitar
Alec Higgins - keyboard
Austin Beede - drums, percussion

Absolutely stunning vocals, the heartiest bassline going, a lead guitarist that wails like a rock and roll veteran one minute and switches over to assert a double keyboard influence on one of their smash hits "rise from the shadows", a steady driving heavily themed keyboardist and a smashup drummer who knocks them dead every show. These guys "have it". Check them out, I'm sure you'll agree.

They have just two albums out but are on the fast track to stardom. They've played huge gigs like Bonnaroo, Coachella and Lollapalooza, have warmed up great acts like Dave Matthews Band, Oasis and Them Crooked Vultures. Their music has also been on the TV show "Californication" as well as BBC Series One series "Survivors". They are currently working on their next album which is sure to be even bigger and better than their last smash hit "The Broken Side of Time". (ATO Records, Nov. 2009).

Tonight's show was just fantastic. They opened with Leave Us and Forgive Us Blues a true blues rocker that shows the incredible talent of each band member. From the soulful singing of Petter to the beefy bass this one get you going. From there it just got better and better. They played many new ones tonight, including some great new tunes that will hopefully be on their next album. Also on the setlist tonight was Taking Control which is one of my personal favorites. A true rocker that any hard rock fan will appreciate They finished up the night with Rise From the Shadows with the crowd clapping along to the beautifully sounding voice of their leader, followed by their trademark rocker ATX a rock and roll jam which tonight included a very hypnotic, psychedelic lead guitar intro which just preps you for their slamming rock and roll trademark ATX. Also tonight we were also lucky enough for two encores, a new one called Wait(?) which will probably be their next huge hit and it all ended with the crowd favorite Lucy Rider. I must say that at the end of the show everyone there knew what they saw. An absolutely fantastic new band treating us to their wares. A Beautifully crafted combination of soul, blues and down home true gritty Rock and Roll. We will be hearing and seeing much much more of Alberta Cross in the future. Of that I am sure.

The boat cruises are arranged through a company called rocks off which specializes in chartered cruises of all kinds. Music, sports, private events, etc. More info available at rocksoff.com. The night of music was also presented by Relix Magazine and John Varvatos Productions. I highly recommend this type of venue. It's a great night out with fantastic music, great food, drink, city views and exciting rock and roll bands on the beautiful and peaceful Hudson Bay. Check it out. You won't be disappointed.