The Venue: The Orpheum is in the theatre district in Boston. It is an historic venue with ornate architecture, smaller than an arena. The setting lent itself well to Jason Bonham offering tribute to his father amidst the Led Zeppelin fans who've loved his music for decades. It also was a place ignite the fire of this magnificent legacy with the newly inspired generations.

I moved around the theatre all night, visiting with folks and getting pictures from different perspectives.

The Band: Present with the Ludwig kit from his father, Jason took the stage with Stephen LeBlanc on keyboards and steel guitar, Michael Devin on bass, Tony Catania on guitar, and James Dylan on vocals. 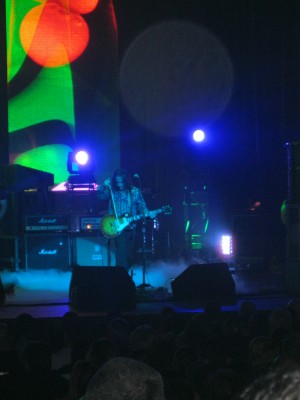 Rock n Roll, Celebration Day, Black Dog, Your Time is Gonna Come, Babe I'm Gonna Leave You, Dazed and Confused, What Is And What Should Never Be, The Lemon Song, Thank You, Moby Dick, intermission, Good Times/Bad Times, How Many More Times, Since I've Been Loving You, When the Levee Breaks, The Ocean, Over the Hills and Far Away, I'm Gonna Crawl, The Song Remains The Same, Stairway to Heaven, Kashmir, encore, Whole Lotta Love.

At the start of the show, the video screen behind the band was flooded with family photographs, childhood videos of a warm and loving family exploring music, having fun, and building dreams together. Jason Bonham was narrating along, stating, "This is my father, this is my story." All of this was put into music history context with the opening of time period pictures of the great musicians from the time that John Henry Bonham lived; Little Richard, Ray Charles, Elvis Presley, Buddy Holly.

Rock n Roll blasted onto the stage. The video backdrop was amazing and changed with each song, sometimes showing multiple image changes within the same song. There were also great psychedelic presentations and beautiful mandalas which highlighted the Led Zeppelin experience. Black Dog had the back and forth chant from Dylan to the audience, "Uh-uh- uh-uh" everyone rockin, eager to belt out those blue-y moans.

"Good Evening Boston !" Bonham said he was "overwhelmed' with the love and respect that fans have paid his father and he "never imagined in my wildest dreams" that he would have such an outpouring of devotion.

"Our House" by Crosby Stills and Nash was played in the video during one of the family film presentations. How amazing that Jason could share these moments with us. There was a level of trust and respect for his family that was unmeasurable.

Jason Bonham, "I know you miss my father- I miss him too..."

Your Time is Gonna Come : http://www.youtube.com/watch?v=O90pY9xHv88

During Babe I'm Gonna Leave You, the multiple guitars covered the track while the blues effect captured the audience. Howls, screetches from every row, "I know I'm never never never gonna leave you babe ..."

Dazed and Confused was one of the band favorites played tonight. You could barely hear Dylan's voice over the crowd singing every lyric. The video had a psychedelic backdrop and the whole experience of it was transportive. There was white smoke across the stage and the tempo slowed for Tony Catania to use his bow. There was a heavier feel to the guitar work, I think and different tempos for the solos with this band. The songs were made their own, while still respecting the Zeppelin frame.

Jason seemed proud of any part he had in keeping the Zeppelin music alive. He showed off the shirt he had worn at the O2 in London, during the one off tribute to the late Ahmet Ertegun, founder of Atlantic Records. I was lucky enough to have gone to this show. The element that will always stay with me as I watched Jason play with Jimmy Page, Robert Plant and John Paul Jones was their timing. Their non-verbal cues to each other during every song to perfect its timing was remarkable.

This show tonight was powerful in that each musician was talented in their own craft. They came together for this tour to support Jason in his tribute to his father. They also looked like they were having a blast playing these timeless pieces. The songs played were very close to the studio versions, yet the band at times, put their own signatures on the tracks. Michael Devin was glorious on bass and kept a really solid foundation for each song. His energy was contagious too. There was a wild surprise from both the band and the audience when things were really jamming. "How are we doing so far?" Jason would say, and the crowd raged with applause, "No, How are we DOIN?!" and the crowd stormed with cheers and more applause.

There was no avoiding that all understood the tragic loss of John Henry Bonham on September 24th, 1980. There were two songs during which Jason played side by side with John Bonham via video. Moby Dick and When the Levee Breaks. He said his father told him he dreamed of having them play together someday at the Royal Albert Hall. My theory is that after the outpouring of support for Led Zeppelin following the O2 performance, Jason felt for the fans as they were still yearning for their band. This tribute created a mecca for Led Zeppelin fans to celebrate the phenomenal art of this music. Much like the crowd at the O2, the Zeppelin fans were so happy just to be together; singing every lyric, air jamming every note. Vintage t-shirts were everywhere, most were proudly worn by loyal revelers who've seen Zeppelin in the 70's. Those guys were my idols for sure.

The Lemon Song raged with ecstatic delight. The back and forth exchange between the lead guitar and the vocals was great and right on cue. The "killin floor' was on fire.

After Moby Dick there was an intermission.Upon return, we were treated to some very very funny footage of little Jason, scooting around the house singing something obscure (repeatedly) and then doing a fancy pants dance! We were just cracking up. Another reviewer (Gus Griesinger from backstageaxxess) said that just this "hoot" was worth the price of the admission ticket - and he was right. Jason came out, "What were my parents thinking?!" Good Times, Bad Times is blared from the stage and they nailed it. Solid.

We had a few cues from the band to start clapping and the audience did, but then trailed off into their own funky amoeba dance. We were dazed by then. "How Many More Times" was plummeted upon us from the Zeppelin I (1969) vault. I have to say, I think this was the best song of the night. James Dylan, as I heard it, seemed to really dig singing the blues riffs. Those deep, growling, gut turning churns- the little Plant/Albert King with Booker T and the MG's throwback- "They call me the hunter ... that's my name ..." Yeah- love that- dredge us up and bring us along for the ride. 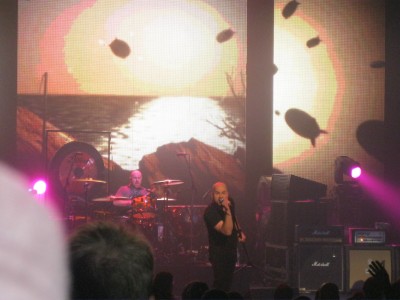 Steven LeBlanc's skills were highlighted with "I'm Gonna Crawl" and it was beautiful.

When the double neck came out, I knew Stairway was coming up. The Song Remains the Same add on comments were covered and everyone loves that, "Does anybody remember laughter?" Dylan smiled as the crowd sounded so sweet singing along. Jason introduced the band again, they did a quick nod and blasted off to "Kashmir!" My camera was fogged by then because the heat in the room blurred the lens. It was hugely spectacular, precise and blaring with the powerful and colorful video show behind. Wow.

Jason proudly came out- took a bow- beaming with appreciation. "This is fantastic- you all are fantastic!" 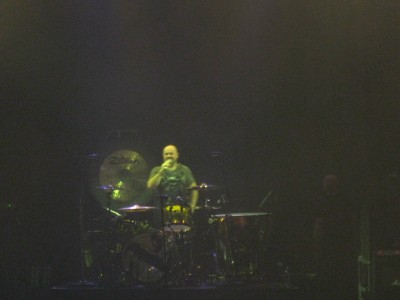 Encore- "Whole Lotta Love" They changed the arrangement around the solos some -Catania did some funky magic with his hands near the amps that was startlingly dark and groovy- then they went back to the regular structure of the song and rocked it out. The crowd was so hot for this encore, that literally, my camera was completely fogged up !

I've seen Jason support the Firm when Jimmy Page was touring in the 1980's. I've also seen him play at two Led Zeppelin reunions, the Anniversary of Atlantic Records in NYC and the Ahmet Ertegun Tribute at the O2. He studied his father's work and drummed through both of these historic performances, each one better than the last. We will never forget John Henry Bonham, and thanks to Jason, there was a way to celebrate and share the love of Led Zeppelin.