Dawes with Bob Dylan at The Mullins Center, April 6th, 2013 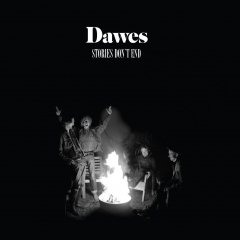 And that's a good thing.

Los Angeles rock band, Dawes, had the honor of opening for the legendary, Bob Dylan. Dawes introduced themselves expecting that the audience didn't know their music. This surprised me, because the last time I saw Dawes, they ruled the Fort Stage at the 2012 Newport Folk Fest. Thousands of fans were gathered to see this exciting set of vibrant artists, step right in to the shoes and eventually share the spotlight, with Jackson Browne, Jim James, Tom Morello, and Sarah Watkins. We knew who they were, and I suspect many in the audience tonight did too.

At Folk Fest, the up and coming bands were constantly evaluated by the veteran crowd who knew their roots. If a band was called, "Dylanesque" by a folk traditionalist, they were 'in' with approval from the crowd. That weekend, Dawes achieved superstar status, by working the best qualities of classic folk and rock, into contemporary sets with spark and lyrical wisdom.

Whether classic rockers like it or not, the standard of standards in music writing and poetic conscience is Bob Dylan. Even Jimmy Page categorized Bob Dylan, when Absolute Radio asked him what he thought of Dylan's 70th birthday. Jimmy Page: "Bob Dylan...oh my goodness, he changed it all. Just remarkable, Bob Dylan. His early songs and even now. He is just head and shoulders above so many people".

On April 6, 2013, Taylor Goldsmith, Griffin Goldsmith, Tay Strathairn, and Wylie Gelber, quietly walked on to the stage to open the show for the incomparable Bob Dylan, at the Mullins Center, Amherst. You could feel from the stage tonight, that this opportunity was perceived by the band, as once in a lifetime. They were elegant and gracious, taking nothing for granted. This made me respect Dawes even more. When the crowd started out quiet, they played their hearts out. When the crowd came around and gave them a standing ovation toward the end, they played their hearts out.

The band opened the show with rhythmic vibe from their new album, that underlined the beats to "From A Window Seat." You can't comment on Dawes without seeing Griffin Goldsmith's cloud of hair, and sideways-arm-leaping drum technique in your mind. Once you see it, you will know what I'm talking about.

Griffin's a great drummer and keeps the time of the ever changing styles of the his brother, Taylor's songwriting. Many sections and phrases are layered as they take place, sometimes within the same song. This is what gives Dawes such a grounded foundation. The songwriting is complex in its instrumentation, with lyrics that are cemented in real life lessons.

Taylor Goldsmith's voice reminds me of Harry Chapin, it has that type of depth and grit. From their album, Nothing Is Wrong, "Time Spent In Los Angeles," came through with a set of charms that was far from tragic. Tay Strathairn's organ hum brings a vintage echo to Taylor's steady vocals. The song rises and falls, while Taylor's voice remains strong and steady. I love how the guitar pieces weave in and out, solos that could go on for several minutes, but don't. There is enough talent in the band to show off, but the control that they demonstrate in how to use this power, is what is making Dawes a great performance to watch.

From Stories Don't End, "Most People," had many of the women in the audience whispering and snickering to each other 'that's me... '. Dawes writes songs that are a mix of others' stories or direct narratives to the audience, filled with lessons learned from experience. The vocals here were loud and bold, all band members on all fronts. With Griffin on the shakers, and alternate harmonies heard from the entire quartet, this song is a great showcase of the vocal talent that is inherent in Dawes. They announced their new album will come out in three days.

"A Little Bit Of Everything" from Nothing Is Wrong, grabbed the crowd and took their attention. Tay Strathairn's piano solo was central to this beautiful ballad. The drums were a tense marching pace and it filled the room with reverence. Taylor's vocals, as he ached for mashed potatoes and 'another chicken wing,' brought tears to the eyes of this stunned audience.

"When My Time Comes" was well placed in tonight's line-up of seven songs. It's a celebration of life's development at any age. This song was a loud hell bent anthem at Folk Fest, and easily caught on to the Mullins Center crowd tonight.

"Someone Will" is a great rolling tune of honesty, unconditional acceptance and reconciliation. Wylie Gelber's heavy bass almost sounded like it was from a jug band, it was so organic. Dawes ended the show with "Side Effects." Tay Strathairn's piano and keys were strong all night, closing in a crescendo, using a call and response with Taylor's guitar work, that rocked the house. This song embodied every style of music you could cook up in your head. Improvs, blues guitar solos, bass rhythms, reggae vibes, and drum beats that made Griffin appear to be sitting on a spring, had the entire room in a psychedelic groove. It all came together as a great set, leading this selective crowd to nod and stand in applause.

Read the review of Dawes at The 2012 Folk Fest here.

Stayed tuned for the review of the Bob Dylan performance from the same night.

Tangled Up In Blue

Spirit On The Water

What Good Am I?

Thunder On The Mountain

All Along The Watchtower

Ballad Of A Thin Man

Many thanks to the Led Zeppelin Ultimate Fan Page for fact checks on this article.