Mike Gent of The Figgs at Club Passim, Cambridge, MA 2013 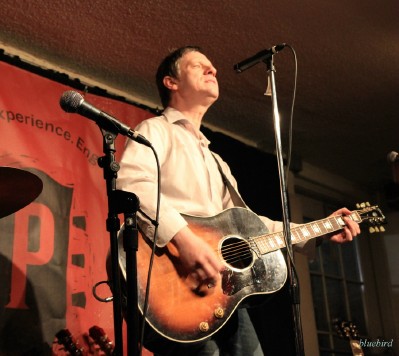 In support of Kevin Bowe and The Okemah Prophets - Read that review here.

What do The Figgs, Graham Parker and (the) Candy Butchers have in common? Mike Gent. A fabulous guitarist, who hates technical errors, because "reverb makes him nervous." Everything he played at Club Passim was clear as a bell. Vocally, Gent is focused, with a sound as warm and dreamy as Joe Jackson, and a timeless rebel spirit, as funky as Elvis Costello. His recorded guitar work can wail like a metal shredder, but there is a lot of acoustic finger picking too. This live show was one surprise after another. A surprise to Gent as well, was his set list. Changing it mid-stream, self effacing when the lyrics trailed off, he created an atmosphere that included everyone in the room. He delighted Club Passim on a Monday night with original songs, covers and all out requests.

(Editor's Note: Mike Gent is trying to give up cursing, he's "working on it." I usually don't post profanity on this website, but I had to throw all the rules out the bird house window when we ran an article on Ozzy. Mike Gent is no different.)

He opened the night with "This Might Get Boring." Within 30 seconds, it was apparent that expecting creative, poetic, prolific lyrics was the norm from Gent. He went right in to the groovy "(romantic needs led to) False Alarms" from his 2009 solo record, "The Name of This Record Is Mike Gent," (Stomper). Gents' rhythmic guitar playing was not only great to hear, but he has this flick of the wrist style thing going on, that I tried to catch on camera, but could not. He is fast.

My favorite song of the night came early with "Alice The Goon." Gent laid out a bit of controlled distortion, mid-bridge. I think I may just clean my house and plan a cocktail party, so I can impress my friends by playing this slick and swanky tune. "Save some room, throw the chairs in the pool, in a basement room, with Alice The Goon ... "

Gent is a rapid fire story teller. Playing songs that ranged from going to his dentist to "Feline Blue," a song about a cat lady with a neglectful partner who accidentally killed the cats. This lead to him playing some "evil Tony Iommi sh*t," nothing was predictable at this show. What I did not expect is that he would from time to time, 'get all George Benson on our as*es ...' I knew what he meant when he said this. Many rock guitarists admire George Benson for his technique and phrasing. And yeah, I heard rest-stroke-gypsy-jazz-picking vibe, from Gent that night. Later he broke into an acoustic version of Led Zeppelin's "No Quarter." We were in the Houses of the Holy Gent. ("No need to sacrifice that goat.")

Gent asked for requests. "Figgs songs, anything, I'm not afraid" he said. McCartney himself would have sang along to Gent's "Mrs. Vandebilt" with the Club guests chanting, 'Ho, Hey, Ho.' "No Time Is The Wrong Time To Groove" lead him to get "all Richie Havens on our as*es..."

"A free mind is all you need" to enjoy a raw Gent show. Catchy phrasing on guitar with thunderous jamming and high effects made it remarkable that all of this sound came from one guy. Proper Opera gave us a ballad about his teeth problems. We WILL have the last laugh. This song was hilarious.

This Beatles inspired evening went into "Jealous Guy" (John Lennon) and Gent definitely made it his own. I found Gent's version to be bolder than Lennon's, making more of a statement. The big surprise to all of us came when Gent suggested he play "Oh Yoko". This had Kevin Bowe and the band quite interested and Kevin commented from the back of the room, that he'd never heard it live before. Mike took off with the song and nailed it. Then Kevin snuck onto the stage, diggin out his harp, they both nodded to each other and punk history was made. Right there on this Monday night in this small club in Cambridge, Mike Gent, who's toured with Tommy Stinson, was jamming to the legendary, "Oh Yoko" with Kevin Bowe, who's toured with Paul Westerberg. Songs For Slim was still spinning in my head from the month prior. To witness these guys hanging together in their circles of greatness, anyone who appreciates The Replacements and The Figgs, would say it was a fantastic night from Mars.

(The only thing that was off the mark was my videotaping of this song because I adjusted the sound being so close to the stage and really didn't need to. Gent and Bowe were totally in control of their vocals, as was the Club sound engineer).

For his closing numbers, "Under A Soft Rock" had Gent in a great picking jam. I saw Lindsey Buckingham last year and thought he was one of the most dynamic guitar pickers live. The impact of this type of guitar talent is all soul and muscle. Who needs an amp when you can hear Gent bend strings exponentially? Live audiences seem to be what drives him.

The last song had Gent switching guitars to play something new. He worried it would sound like "Dust In The Wind" (Kansas), because of the picking, but the multiple change ups, bridges and very intense solos, had this consistently creative performer quite far from playing that 'same old song'.

The Figgs formed in Saratoga Springs, NY (1987). They are still together. Mike Gent and The Figgs toured as Graham Parkers backing band since 1996. Gent also toured with Tommy Stinson, as his backing band in 2003. They have 9 LP's, 3 EP's, and 14 Singles. With Graham 1 Studio LP and 3 Live LP's.

No Time Is The Wrong Time To Groove

Under A Soft Rock