I'm a newbie.  This is my first review. And my first time ever seeing Ms. K. D. Lang perform with the, "Siss Boom Bang" band.  But on that, I hope it's not my last.  Because basically it was a celebration of everyone just being themselves and accepting of each other.

A dear long time artist friend quickly bought two tickets to the August 15, 2012 K.D. Lang concert.  And good she did that.  The Showroom at the Turning Stone Casino (Oneida New York) 800 seat capacity filled up very fast. Everyone applauded warmly as K. D. Lang walked down stage dressed in a black suit with a black vest, white blouse and a bright red scarf or cravat.  Behind her was her band called, "The Siss Boom Bang" band. They capably played anything from sliding steel guitar for a country sound - to base, drums, lead guitar, and keyboard accompaniment that sounded like "Leslie" spinning speakers sometimes. 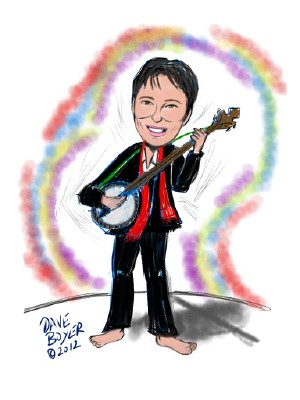 Fans did come to see, hear and enjoy K. D. Lang's performance. This performer from Canada never lost eye contact with the audience.  Matter of fact, K. D. Lang walked barefoot on stage!  One time she was at the edge of down stage.  One of the fans rubbed her toes. "We have a toe toucher!, she smiled and said.  She also said, "Let's consider our situation. It's a Wednesday night. You're in a casino.  And you're at a K.D. Lang concert.  I guess that makes us all freaks!  But ladies and gentlemen, that would be okay.  Because tonight, there are no haters in the room. All the haters have left the room."  People really applauded hearing that.

"For the next 90 minutes, ladies and gentlemen, please feel the love in the room.  We are going to give you a performance of love."

She sang some wonderful song. including, "Hallelujah," pretty early in the concert.  I kept getting the impression that she was affirming not only herself completely, but also everyone else in the Showroom at Turning Stone Casino.  One person yelled out, "I love you!"  K. D. Lang sincerely said, "I love you too... both individually and collectively." Again, K.D. Lang was always connecting to the audience.

K. D. Lang also performed a song with a banjo. And she warned everybody that if they felt a strong attraction to the stage while she was playing the banjo, she joked that it was, "Quite normal."

She called the banjo, "A chick magnet."

Toward the end of the concert, K.D. Lang removed her black vest & jacket and loosened up her bright red cravat and just really relaxed, singing her amazing voice that sometimes swooped from note to note.  She also sang a song that she recorded with the very famous Tony Bennett (who is the absolute expert in connecting with an audience).

There wasn't a single bad note or a dead moment in the entire performance.  K. D. Lang acknowledged her band members individually, the crew and roadies as well.  At least two encore requests were made from the full house.

If I only had one tiny criticism of the concert, it would be that when K. D. Lang was downstage she appeared to me in shadow.  I didn't see a follow spot from the back of the house tracking the performer.  But that would be a conversation she would have to have between her and her lighting designer.

Later, I overheard someone say, "No one sounds like K. D. Lang."  I find myself agreeing with him. To me, maybe she sounded a bit like, Joan Baez.  Or had the confidence of Patsy Cline.  But she does have a singular voice.

I'll use a metaphor from science: The periodic table of the elements.  She might be similar to other female singers.  But just like gold, silver and brass are metals. Yet they are very different as elements. And that's exactly the impression that I had from my first K. D. Lang concert.  She's singular like a musical element.  A great female performer and vocalist.

Don't be surprised if you feel a little better about yourself after seeing a K. D. Lang concert.

(Dave Boyer is a noted international, traditional and digital caricaturist, cartoonist and photographer.  He is originally from the Bronx.  He now lives in Rochester, NY with his spouse, Cindy Boyer, north of the beautiful Finger Lakes region.  "Bippy" is his cartoon nickname from a comic strip he created, "Bippies."  Dave Boyer is also a friend to Japan, and has done caricature there many times since Japan's Golden Week, May 1999.)

Bluebirdreviews is on FACEBOOK! Join our music and artists' community for daily song posts, site updates and music reviews.

Support the artists you love by purchasing their music!

KD Lang albums and previews are available on Amazon, among other outlets.