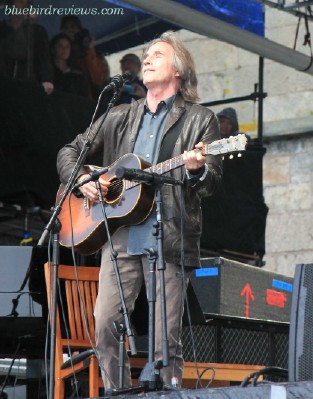 Review and Photos by Bluebird.

The Newport Folk Festival has been running for decades, drawing fans and musicians from New England, but expands its reach around the world. It is an outdoor event, held at the Fort Adams State Park, which is accessible by road and water taxi off the Newport harbor. Fort Adams hosts four stages with vendors and facilities accommodating tens of thousands of people. The festival runs for two full days, starting at 11 am, with the last act hitting the stage around 6 pm. The line-up of this year's festival was an eclectic mix of historic folk that spanned the Guthrie's, a tribute to Levon Helm, and a shot of straight out funk, soul performance by Charles Bradley, making way for a kickin house jam, with the up and coming rock band, Dawes.

The headliners for the festival this year were, My Morning Jacket and Jackson Browne. And right on cue for both nights of performance, just in time for these long awaited acts - RAIN! Now, I don't mean drizzle or a summer mist to cool off the heated, tie dyed, crowd. I mean a heavy, coastal, ruin-your-cellphone-in-your-pocket, kind of rain.

So what do faithful folk fans do when Jackson Browne comes on and the skies open up?

And so does Jackson Browne.

Before the show, I watched him milling around back stage, reading the set and production list. A woman next to me in the crowd said Jackson's guitarist tours with 11 guitars. Without much announcement, Mr. Browne quietly sat at his piano, but the fleet of photographers and reporters could barely see him, because the wind and rain were blowing his hair right into his face as he started playing. 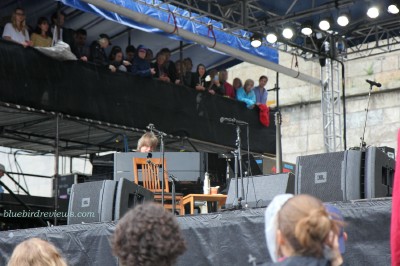 Relaxed and comfortable with his music, he kept playing. A small coffee table on the set had a bottle of water, what looked like a cup of soup, and some other casual essentials. He then sat on the nearby chair, with his guitar. It felt like we were visiting him in his living room, even though thousands of people were outside in the rain. 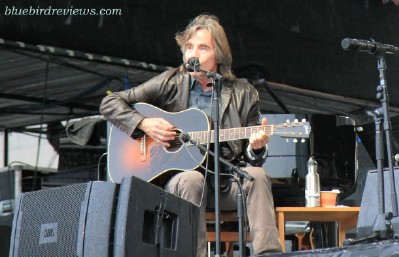 Sarah Watkins came out on fiddle, with great band accompaniment. Given that it was the100th anniversary of Woodie Guthrie's birthday, Jackson told us the story of a letter from Woodie Guthrie to his second wife, Marjorie. He said the song was long, and Browne noted it was hard to take things out, because 'that was a letter to Woodie Guthrie's wife ... " In this moment, the crowd was warmed and comforted, more than any ray of sunlight imaginable. 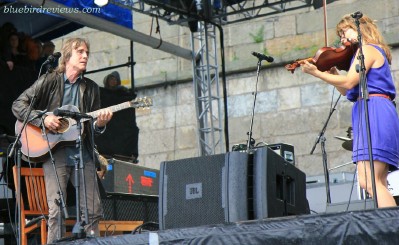 This song was admittedly unfamiliar to the crowd. Jackson Browne flipped pages and pages of lyrics, offering them to accompanying musicians. This was music history unfolding right before us. The 'sit-ins' that happen at small gatherings and intimate venues were brought right to the main stage. It was an honor to be there. He smiled, leaned back in his guitar playing stance, and we all were wiser for the experience. Here is a clip of the original recording artists who turned the letter into a song last year. From 429 Records, "You Know The Night."

Browne moved on with the set introducing "A song about being a slave to the female form ..." "Nude Cabaret" was performed live with Sarah Watkins.

"I'll Do Anything" brought more of Sarah's fiddle, added the members of the rock band, Dawes. 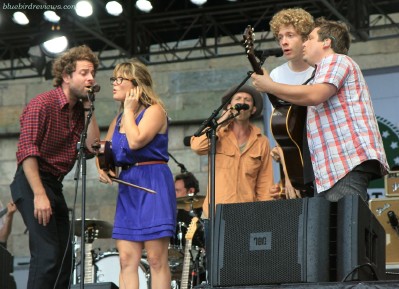 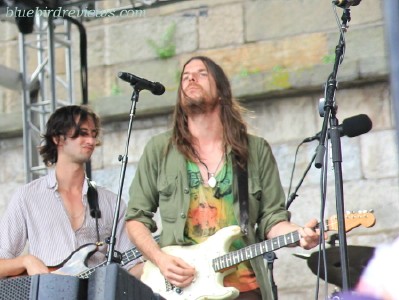 A five way solo ensued. The rain continued, only bringing on more great music. "These Days," which is my all time favorite Jackson Browne songs, hummed out sweet and easy. Dawes teamed up with WIlson and Jackson Browne for a rockin solo that was more than just all right.

"This whole festival is a spirited thing. Everyone sitting 'in' with each other." All together they played the Jackson Browne original, which was made even more famous by The Eagles, "Take It Easy." The very successful set came to a close with Warren Zevon's smash hit, "Lawyers, Guns and Money." The spotlight on Dawes, lead to a screaming psychedelic solo that switched the focus to guitarist Tom Morello playing by his teeth!!! At this moment, the sun came out. I could see even the security and photographers, jumping and jamming. The CBS news guy had a red towel wrapped around his shoulders, as the coverage was pieced together between down pours, but so much fun for everyone. 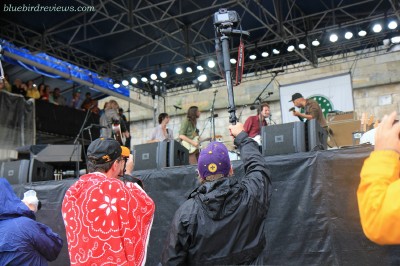 Jackson Browne commented to Tom Morello, "Orpheus you brought out the sun!" 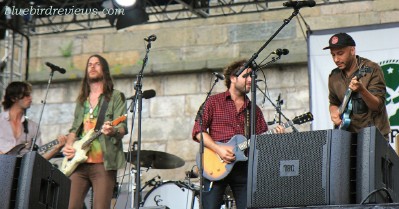 Throughout the set, there was one fan who kept yelling, "STAY". We all know and love the song, The Load Out/Stay, and given the weather, even though Jackson didn't play this hit, we were acting out the lyrics and he was demonstrating his well known character. "Make sure you've got it set to go, before you come, for my piano ..." With a torch passed on to the next generation of musicians right before our eyes and ears, the sun peaked through the heavy clouds to bring the 2012 Newport Folk Festival to a magnificent end. 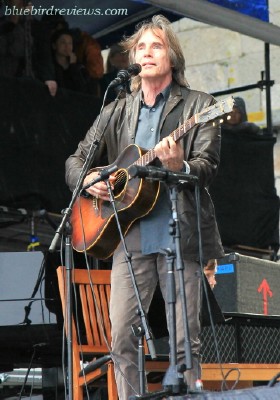 Set List for Jackson Browne at the Newport Folk Festival:

From Lives in the Balance, "Black and White"

From Hold Out, "Call it a Loan"

From Jackson Browne, "A Child in These Hills" (with Sara Watkins)

"You Know the Night" (with Sara Watkins) A letter from Woodie Guthrie to his second wife, Marjorie.

From Time The Conqueror, "Live Nude Cabaret" (with Sara Watkins)

From I'm Alive, "I'll Do Anything." (with Sara Watkins)

From Late For the Sky, "The Late Show" (with Dawes) (also with Sara Watkins)

From Looking East, "The Barricades of Heaven" (with Dawes) (also with Jonathan Wilson)

From Everyman, "These Days" (with Dawes) (also with Jonathan Wilson)

From Everyman, "Take It Easy" (with Dawes) (also with Jonathan Wilson and Sara Watkins)

From Everyman, "Our Lady of the Well" (with Dawes) (also with Jonathan Wilson and Sara Watkins)

Bluebirdreviews is on FACEBOOK! Join our community for site updates, daily song sharing and music reviews!