Rhode Island's own, Brown Bird, opened the Fort Stage, with a mix of folk to blues and a deep sense of soul vocals. MorganEve Swaine played the upright bass and cello, and introduced Dave who plays, "everything else!" There was a new mix of songs with fan familiar material, the cello pieces were beautiful and Dave offered up foot-pedal drums to accompany his electric guitar instrumentals.

"How does it feel out there?" "Pretty good?" Dave asked. He said he was grateful that "Jay had faith in us" and hoped that "people would like them." This humble request was an understatement for the intelligent and prolific music that came from the duo. MorganEve had a low, sharp voice and Dave kept the tempo moving with great guitar licks. 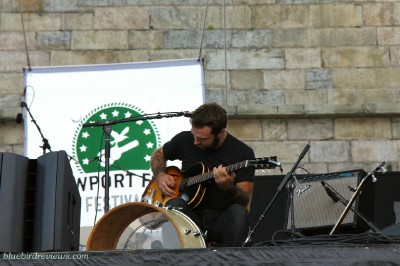 Dave, as well as countless musicians that played after him at this event, stopped to comment on how "that view - of the sea and the crowd - is amazing ... " "... can you hear us out there, boats?"

Brown Bird played a particular song which had them "apologizing to the dancers out there," "This is a little bit weird to dance to, but it would be really fun to watch you try ..." It had a middle Eastern feel to it, but the spareness left space for interpretation. Rockin pickin with a slow line that quickly sped up was a great act to try to follow for sure. A woman in the audience yelled, "you need belly dancers!" And Dave said if she has credentials to approach the stage, he'd allow it!

They played a song about working in Warren, RI, "if you're looking for someone to build you a boat, it's the place to go ..." I may be out of line in saying this, but Dave's vocals were so deep in this song he sounded like, the late, great, Lou Rawls! I was close to the stage, so I could see how his face changed as he gutted out some gruff blues to soul notes, while contrasting MorganEve's softer voice. They were slow and steady. Jim Croce came to mind as well. Meanwhile, little girls were sending up beach balls ... to generations of families in their favorite lawn chairs ... 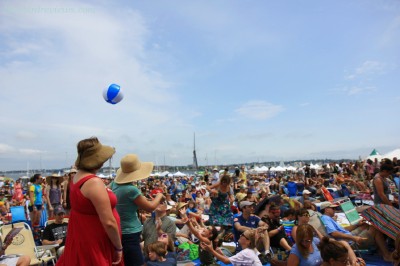 Spencer Swaine, from The Devil Makes Three, joined Brown Bird at the Folk Fest today. The rucus this trio made in this folk world would rival any metal show, and I caught some Warp tour t-shirted fans rockin out because they know good music when they hear it. Spencer's fiddle playing shaved off the tops of our heads and there was no slowing down to pick up any pieces. The acoustics were fast and flawless.

A standing ovation and introductions, again. Their new record is "Salt for Salt." I noticed this during the first set and again for the entire event, there were more men dancing at a music performance than women. It went on for two days straight. As the sun cast a shadow over the cheering crowd, Dave said, "Thanks so much for being so, welcoming!"

They closed their set with a song about the devil drawing the voice of reason. Their bravery and edge-y take on the new generation of folk music reminded me of the Ozarks' Ha Ha Tonka. Except Brown Bird has only two to three members making all of that sound. Brown Bird provided a great opening act for the Newport Folk Festival Fort Stage, 2012. They made an impact and showed the level of quality that these experienced concert goers should expect. 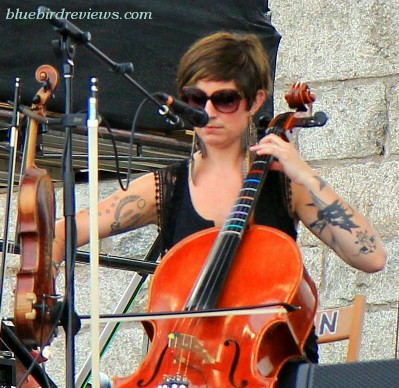 Bottom of The Bottle