A Metal Rock Review by Whitey.

One of the best values of the summer, the Uproar Festival promises to deliver. I saw the show at Saratoga Performing Arts Center.

There were a whole bunch of vendors selling anything from shirts to body jewelry. There were 2 stages. On the first were 4 bands. Unfortunately I was late and missed the first 2 bands, which were Mutiny Within and Hail The Villain. I came in on the middle of the third band, Airbourne. They reminded me a lot of AC/DC. They were pretty good but I didn't know any of their music. The headliner of the first stage was Hellyea. Vinnie Paul, the drummer from Pantera is in the band as well as members of Mudvayne. They rocked.

They have a couple of songs played on Satellite Radio. Hell of a time, Cowboy Way, and Hellyea were among some of the songs they played. It was great to see Vinnie Paul behind his drums. Then it was on to the main stage in the amphitheater.

On first was Halestorm fronted by Chrissy, a female singer guitar player. They were great. They played 45 min set. Some of the songs also on satellite radio include, Get Off on You and Familiar Taste of Poison. They were defiantly the surprise of the show. At one point the entire band all played drums. What a great set! Next came one of my favorite bands, Stone Sour. This band is fronted by Corey Taylor of Slipknot. The delivered a great show. 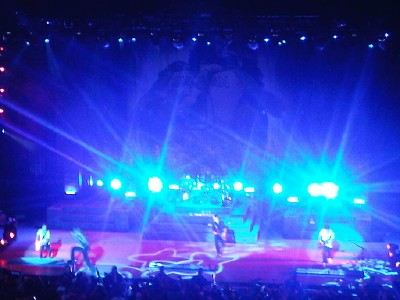 It was so refreshing to see them have so much fun on the stage together. They played a few songs off their new album that is due out early Sept. Corey came out at one point alone with a guitar and sang Looking At You Through The Glass, which would be considered their biggest hit. They were intense from start to finish. The next band was Avenged 7fold or as they write it A7X. The opening was insane to say the least. They opened with the song Nightmare off their new album. As the song started a man fell from the lights and was hanging by a noose abot 25 ft. above the stage. Of course this was staged.

Their stage was set up like the gates of an old creepy mansion. There were flames and lights. It has been along time since I've seen a stage show like that. They played songs from their long catalog of music. The drummer who played for them was Mike Portteny from Dream Theater. A7Xs drummer had passed away in a car accident earlier this year. They paid tribute to him during one of the songs. I became a fan instantly. Their music is heavy with a lot of duel guitar. Very melodic. They also are driven by powerful vocals. It was a great show!!!

Then came the knock out punch, Disturbed. Their stage had a huge set of movie screens behind them with the drums set right in the middle. They are driving rock with very unique vocals. They played songs from all 5 of their albums. On the screens were movies and colors etc. The music never let up from the beginning. They showed a picture of the American flag during one of their new songs, Another Way to Die and did a tribute to our troops. They played for a solid hour. They did a cover of the Genesis song, Land of Confusion which was good. They ended with Down With the Sickness off their first album.

What a great show! I had good seats that only cost 45 dollars each. All those bands for 1 low price. The show started at 3:30 and ended at 12. It was a great show. If you like heavy music this is a great show. I would go see any of these bands doing their own shows. 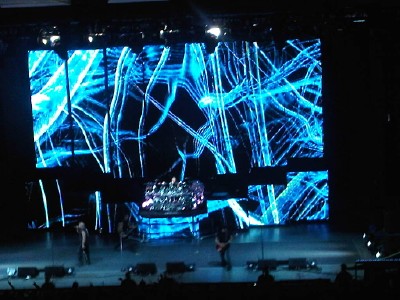