~With Special Thanks to Valerie Jensen Lefevre

Bonnie Raitt, with opening act, Mavis Staples, brought legendary rock and blues to Mountain Park, kicking off the 2012 summer series of concerts. With her fabulous band and loyal crew, she also welcomed NRBQ member, Terry Adams, to top off the evening, for a stellar performance.

Raitt's warmth toward the crowd and her band members radiated across the field, as the cool pre-summer evening turned dark. Highlighted with a beautiful landscape, and occasional flashes of lightening, the atmosphere was laid back and friendly, but literally super charged, with an impromptu grass dance floor started up right on the hills.

"Meet you after the show in the dugout, baby!" Bonnie shouted out to the Class of 1967 from a Poughkeepsie, NY alma mater. Promoting her new record, Slipstream, "Used to Rule The World," started up the set and Raitt sent gratitude to the region from note one. "So happy to be back here, I could stay here all summer!"

Gerry Rafferty's "Right Down The Line," has his own signature sound. Being the respectful artist that she is, Bonnie Raitt paid tribute to him by playing her own version of this timeless singer-songwriter classic. "I wish I could have played it for him!" "Sadly, he died last year," Bonnie said. Raitt's performance of this song had a slower pace and a reggae vibe. She played it parallel to Rafferty's guitar lead version, honoring it, without trying to copy its delivery. It was brilliant!

A fan cardboard cutout of Bonnie when she was 27 years old was presented to her side stage. She howled with laughter and recalled the good times when Linda Rondstat's "Heart Like A Wheel" was popular. Like so many blues musicians, Raitt is a great story teller.

She acknowledged her supporting act, Mavis Staples, several times during the show, saying she has loved her since she was 12 years old. "It is great to have our sisters on the road together all summer!"

"Why don't we play Tanglewood? They have a decibel limit, but rock and roll is in my nature!" Raitt bellowed. Not only does Bonnie Raitt have funk, she also has spunk.

"My mother's memory stuck by me in my activism, that's why I'm still here!

I may not be that popular, but when I've got something to say, I whip it out! "

~ Raitt said, later in the set. 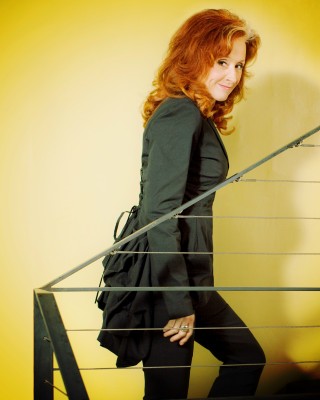 Favorites, "Something To Talk About,""Come To Me," and the fun, funky, "Love Sneaking Up On You," had the Mountain Park fans swaying and jamming to the tunes that seem to be part of our collective minds now. That wasn't the only thing that's snuck up on her, Bonnie shared a funny memory of when she was singing at the Winnepeg Folk Festival, in the 1990's, and a giant June bug flew into her mouth! She said she just kept singin'!

Bonnie Raitt has been in the music industry for decades. She pulls from many talents both within and around her. Deep tracks from various legendary sources came through her vocal and guitar muse tonight. A song from Bob Dylan's recording sessions resulting in the 1997 album, "Time Out of Mind," inspired Bonnie Raitt to cover the song, "Million Miles." Much like Dylan's homage to blues pianists such as Jim Dickinson, she highlighted her pianist/keyboardist, Mike Finnegan. "...drifting in and out of dreamless sleep ..." brought musical visions, mixing serious piano pieces with great guitar bits, the song made historic impact.

Henry Loudon Wainwright III's "You Can't Fail Me Now," was also from Slipstream. Impeccable, vulnerable and beautiful, Bonnie took this spotlight as a chance to introduce her band. Their complete biographies can be found on Bonnie Raitt's website here under 'The Band." George Marinelli, originally from Staten Island, NY, has been with Raitt since 1993. His experience with Bruce Hornsby and The Range, Vince Gill, Art Garfunkel and the Dixie Chicks as well as countless other live and session projects, came through in his ability to jump into the genre hopping style that is Bonnie Raitt. Mike Finnigan, who's played with Joe Cocker, Crosby Stills and Nash, Jimi Hendrix, as well as Etta James, was introduced, much to the awe of the crowd. James "Hutch" Hutchinson, a Massachusetts native from Cambridge and Sommerville, was on bass tonight. His long list of credits had me impressed, but most near and dear to my heart was to see The Wild Tchoupitoulas on his bio! On drums, Ricky Fattar, from South Africa, Raitt said, was "back in the engine room." After recording and touring with the Beach Boys and other acclaimed credits, he has been with Bonnie Raitt since 1979. "That felt pretty good up here!" She exclaimed of her band.

"Marriage Made in Hollywood" from Slipstream had her announcing she was, "Happy to have new songs to play and proud of this "batch." She was also proud of the "Stratocaster" on stage too!

"Thing Called Love" by John Hiatt, from Nick of Time, had her voice so clear, it just sounded great live. Between numbers, Bonnie constantly took the time to notice the crowd and the surroundings. She made this night unique to this location and highlighted memories for the crowd, using her own experiences.

"Look at the light over on that tree!"

~ Bonnie Raitt noticed a tree during her performance at Mountain Park, Holyoke, MA. 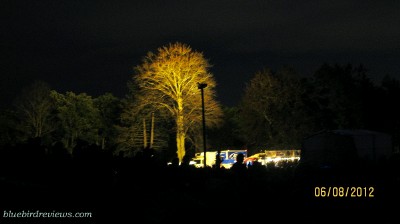 "Not Cause I Wanted To" from Slipstream, written by one of the members of NRBQ Al Anderson and Bonnie Bishop, was performed, further bringing us into the new record, which seemed to fit Raitt and this crowd like a glove tonight. "Make me an angel that flies from Montgomery ..." "Angel From Montgomery," by John Prine, was covered, and had the audience stunned it was so powerful. People were writing down the name of this song and I could see them looking it up on their iPhones, etc., to be able to capture its history. "Down To You" was also part of the Slipstream line-up.

"I Got News For You," a Ray Charles song, brought on a showcase of heavy riffs from Bonnie Raitt, who reminded us that she weighs in to hold her own as a blues guitarist herself. This was highlighted by Finnegan's organ work. I have the 2004 album of duets, Genius Loves Company by Ray Charles and highly recommend it. Bonnie Raitt and Ray Charles perform "Do I Ever Cross Your Mind" together, and it is timeless.

"Thank you all for coming out to see Mavis!"

"Thank you to the lighting crew"

"Thank you to Paul Middleton on sound" whom she has worked with for 25 years.

"I Feel So Damn Good (I"ll Be Glad When I Get The Blues)" ended Bonnie Raitt's formal set at Mountain Park.

"We are not done with you yet!"

"What a night, what a beautiful night!"

"This is a great place to have gigs!"

"Thank you for your passion, respect, good to see multiple generations here!"

Bonnie came back full force to continue the show, and she channeled all of her energy into a powerful version of "I Can't Make You Love Me." With controlled genius, extended vocals, "and I will give up this fight ..." she dedicated the entire song to Tommy Ardolino's wife, who was in the audience. Ardolino was a drummer of NRBQ, sadly, he died in January of this year. The beautiful piano jazz was so sweet on this pre-summer night. The breezes were flowing up the hill, and low bass chords were underlining the sounds of this memorable music.

Bonnie stopped and looked up the hill. "What are you doing up there!" "Have A Heart!" the popular classic from Nick of Time, with a reggae vibe and slide guitar, gave the party a second wind.

Terry Adams, from NRBQ, joined Bonnie for a rousing performance of "Green Lights," a song Terry wrote. Raitt gave Terry a big hug. With Terry on organ, "that's as good as it gets up here!" she said."There won't be a dry seat in the house!"

Bonnie ended the night with the blues song, "Never Make Your Move Too Soon."

Acknowledging all the musicians on the stage "Everyone take a bow!" and a final, "Let's give it up for Mavis Staples' band!" Ms Raitt moved this night along like a swift running train, carrying her Slipstream tour and this Mountain audience, into the next phase of great music, while enjoying the journey along the way.

To join our music community like our page for daily song posts, site updates, live show and album reviews.