I was not only lucky to have seen BJ Thomas perform live, but had the privilege of meeting him after the show. His Southern hospitality warmed the Springfield Symphony Hall, with award winning favorites such as Somebody Done Somebody Wrong Song, Raindrops, The Most Beautiful Girl and many more. The show opened with a spectacular performance by the Springfield Symphony Orchestra. The direction by Kevin Rhodes was energetic and inclusive. Thomas' voice was warm and rich with impeccable form as he exchanged songs and stories with the audience. Collaborating with humor and mastery, Thomas and Rhodes shared the stage with Thomas' band and orchestra accompaniment. They all looked like they were having a blast !

The Symphony Hall is an historic venue with ornate architecture and excellent acoustics. Conducted by Kevin Rhodes, the Springfield Symphony Orchestra offered an  upbeat presentation of American Western and the origins of Western classical music, which I learned, were not all created in the United States. 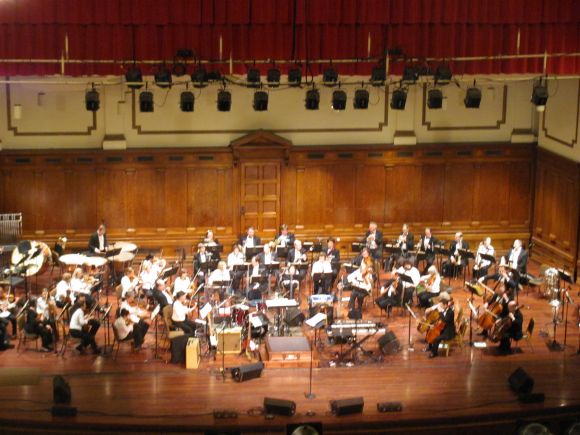 Rhodes explained to us the next piece had nothing to do with American music, but was written by an "Italian guy" in Paris who wanted to sound like the "Wild West." He said, "You all know this one, it is the sunrise, the storm scene in Bugs Bunny and was co-opted for the Lone Ranger" : Rossini's William Tell Overture.

Mr. Thomas quietly walked the stage during intermission and helped his band set up, integrating themselves in with the orchestra. The musicians found their spaces. Seasoned rock musicians alongside the comprehensive backdrop of this expert orchestra. Rhodes sat on a wooden bench, this was going to be good.

The five time Grammy Award winner BJ Thomas came out. On the first note his voice is so familiar, yet live you realize the depth of his tone. "Ready for some old school? !" and the crowd cheered. "Good, that's all I know!" After playing a few early hits, he said to the orchestra, "Good to be with some real musicians!" His band laughed, they were excellent, right on cue and a great accent for Thomas' velvet voice. The blend of rock and classical instruments was a great sound. We've heard these songs on the radio for years, now they were honored with layers of arrangements. Thomas' voice and the ways the numbers were produced kept it from being old fashioned. Vintage and refined, yes, but never old fashioned.

My favorite parts of the show were Thomas' story telling about the music industry. Burt Bacharach, Hal Davis, Jackie Wilson, James Brown, Dick Clark, Johnny Mathis, Glenn Campbell, Brian Wilson, no one was spared ! He even had a story about Angie Dickenson. He's really entertaining to listen to and a great performer. Try to catch him live if you can.

Here's the set list as far as I can remember. I was writing the songs down as fast as I could, there were just so many !

Two Car Garage, A Little Bit of Love, NY Woman, Most of All I Miss You, Just 16 and All Alone, I Just Can't Help Believing, Hooked on a Feeling, Another Somebody Done Somebody Wrong Song, Mama, Did You Ever, Long Way Home, Don't Worry Baby, To Be Loved, Just My Imagination, Raindrops Keep Fallin'' On My Head.

Raindrops has been a special song that my father and I shared since I was a little girl. When my father took ill in 2007, I sang to him countless times. He would have been proud to have been in the presence of Mr. Thomas. And on March 27th, the eve of Palm Sunday under the full city moon, we believe he was.