Details
Written by Bluebird
Published: May 11 2012 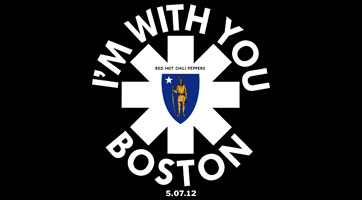 "All aboard stitching time, you get yours - I got mine."

The Red Hot Chili Peppers made the long plane trip across the country to beckon the Boston TD Garden. Steeped in the sports history of competition and camaraderie between the Lakers and the Celtics, the atmosphere here had a driving edge that made the night even more exciting. Both teams were in the playoffs as of this date and the half pant legs of Anthony and Flea were proudly showing purple and yellow socks!

The fans welcomed the grit and candor, because there was common ground in this arena tonight. The Chili Peppers had sold out the Boston Garden months ago, and fans, well aware of the great sports debate, showed up even more psyched to see their funk rock heroes. Music transcends.

In a world of differences, music always wins.

From their 2011 release, I'm With You, "Monarchy of Roses" made a thunderous entrance with Smith on the drums in a cloud of green and white light.

Screams from the crowd swelled in response. Off we go, "Around The World!" Funky bass man Flea rocked it out, loving the spotlight. Anthony was jumping like there were springs on his sneakers. Vibrating sideways on stage in different directions.

With the escalation of lights and sound, the Chili Peppers were in fine form tonight. "Scar Tissue" started up with Klinghoffer leading fresh licks on this classic Peppers tradition. A few bars in had just about every fan singing every word. The solos were extended at the finish with Josh and Flea playing off of each other. As fans still remember the legacy of John Frusciante, there was a welcoming embrace of Josh Kinghoffer tonight, who has been with the band since 2009.

A fan yells out, "THERE GOES THE SHIRT!" And Flea is bare chested, then they wait, "How long before the rest are gonna go?"

Dani California invited Klinghoffer to open up an explosive guitar solo with Flea matching the height with bass lines. Flea had a spotlight off to the side of the stage and addressed the crowd, taking turns with Kiedis. When Flea and Klinghoffer met center stage to jam together, the two rock stars bowed to each other like gentlemen martial arts masters and then tore it up in mid-air with guitar shredding chaos.

Beach balls were released and the fans bounced around along with the Chili Peppers as if the seats did not exist in this arena.

Drums take over and Klinghoffer screeches out a solo with a pedal. Red and white balloons float over the crowd, from the new album, I'm With You, "Look Around!" With the strong funk rock bass lines and the complicated arrangements they pulled off both live and on the record, the song had that signature Chili Peppers sound.

A rare performance of "Breaking The Girl," started rhythmic swaying and spinning among the band members. Flea played swinging and bending from the waist, practically hitting his head on the floor, and was only upstaged by the magnificent drum sequences by the percussion section. Two men strong, the various soundscapes made by the drums, including bells and bongos set this performance apart.

"I'll see you in the depths of your soul brotha!"

Fans were still guessing who would be the next one to take off their shirt and Flea came out to start up the bass line for "The Adventures of Rain Dance Maggie." He got it all going and stopped on a dime. Brilliant! Another track from their new album crashed through the arena and before we knew it, Flea was on the floor playing upside down. Klinghoffer was spinning in a full circle while Kiedis' vocals bellowed this great tune.

"Can't stop addicted to the shin-dig"

Yes, East Side love lived on the West End tonight. Something happened during this performance that moved it from a great funk rock show to a feast of psychedelic soundscapes, imagery, and all out mind bending jam session.  With a blue light on Kiedis, and the band swirling into their jam circles, it all seemed to click with this crowd.

The tempo slowed to invite, "Don't Forget Me."

"Me and My Friends,"

"Under The Bridge," had Flea and Klinghoffer sharing the spotlight together, matching solos.

"Californication," adorned a beautiful red and orange scene while a prescription pill theme trailed through the screen. I love how Kiedis' vocals can handle any range and the band drown us in raw talent as Klinghoffer laid on the floor in front of Smith's drumkit. Flea and Klinghoffer each used pedals for various sounds parallel to each other on the stage.  This song, both recorded and live, is a masterpiece.

"Suck My Kiss," was the crowd anthem tonight and it is a riot to hear thousands of people belt this out on a Monday night. Flea put his hand to his ear in delight as the crowd kept shouting on cue.

"By The Way," everyone in this room was happy to be here beneath this marquis. The last song before encore and the Peppers worked for it.

"LOVE YOU ALL!" was shouted by Kiedis.

At some shows, once the main set is over, there is an exodus for the door before encore, but most of these fans stayed. The arena glowed with, you guessed it, lighters!

What happened after this was electric magick mayhem. Piercing lights, with a fierce duo drum solo had everyone clapping and the crowd invigorated. I glanced away from the stage for a moment and in an instant, Flea was walking on his hands, but the video projected onto the screen made it look like he was climbing up the side of the wall! Deep down funk freaks became of the rest of us, as psychedelic rappin rock continued to unfold. Percussion created what almost sounded like a xylophone. Klinghoffer jumped and stomped with the rest of the Peppers, how can you not? This metal to funk and back jam session was not for the faint hearted. The Chili Peppers were hot tonight and left this crowd raw.

"Give It Away," yielded a slide show of funny videos of the band and fans making strange faces. What would a Chili Peppers show be without the crazy faces? Everyone was on their feet, with 1/2 straddles from Flea taking flight, while the band traded their legs for springs.

What closed the show was a duo of Flea and Smith, with Klinghoffer coming back to work the set up and down the chords. This trio kept going to a moving backbeat meditative jam with sneering guitar phrases that reminded me of Zeppelin's Heartbreaker at one point. The set got faster and came to a crescendo with the fans completely ensconced.

As the band exited they waved warmly to the crowd,

Flea: "Support live music as much as you can! Listen to old music, new music, weird music ... all music!"

Drum sticks were thrown and as in many things in life, some things start as they begin, Smith comes out and whispers to the crowd, "Don't tell Flea, but GO CELTICS!"