FBI Live at the House of Blues: Boston.

Review and Photography by Bluebird. 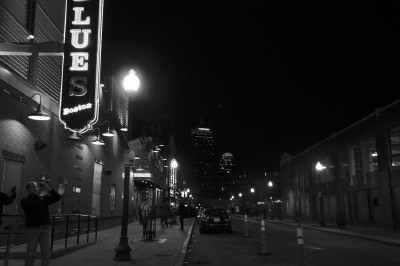 The House of Blues, Boston is an historic venue. There are icons of the ages still present as we witness their impact through music, pictures and wall statues. The hallways speak the blues, paying tribute to the artists who built the House. 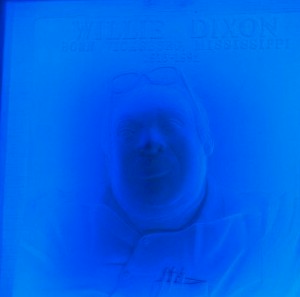 The Foundation Room is a private area within the House of Blues. It is a small space with couches, oversized chairs and alcoves. 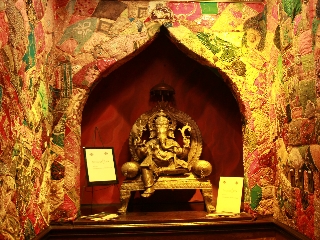 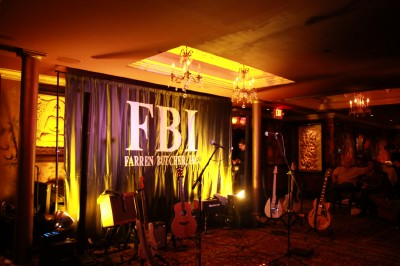 Charlie Farren and Jon Butcher have produced quality music from every genre over the decades. The network of great musicians they have recorded with in multi-media is endless. The credits from their website are just the start of their biography: Read FBI bios here.

It was an honor to attend this performance. Fans, musicians and celebrities streamed in around showtime and mingled amongst the crowd. Jon and Charlie, always the gentlemen, introduced themselves and chatted with, what seemed like, everyone. Tonight was more of a warm reception for family, friends and fans than a concert. The atmosphere was relaxed and welcoming. We sat next to two women who had been in early MTV videos of Jon and Charlie; they were still fans after all of these years. These women spotted Danny Klein of the J Geils Band, Cindy Lovelace and Johnny A. Will any of these musicians play at this gig? The hum of excitement was noticeable. There were other familiar faces in this talented crowd, too. We didn't know who else would walk through the door!

To the elegant stage walked Charlie Farren and Jon Butcher. The show started off with Charlie's stunning soul bellow and Jon's riveting guitar. 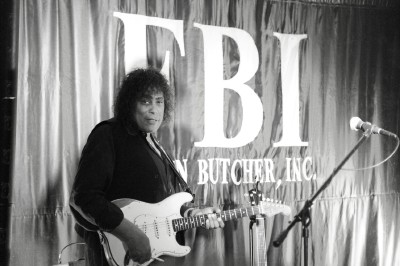 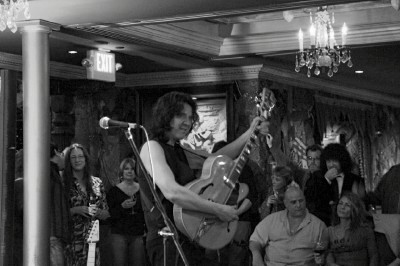 From the album, Deja Blue:

This song is comforting and validating to the weary heart. It brings company, even among strangers. Jon and Charlie fit like a puzzle to create a broad spectrum of tones with the instruments and voices. Jon's vocals are lower in range with a velvet soul blues sound, while Charlie's are a higher tone with a jazz to rock influence. Together, they share the love of all genres and can handle any song it seems. At the end, Charlie sang, "Is there anybody out there?" "We can see you, but we can't hear you!" "Wait for it ..." and he got the audience to sing. All the while, Jon periodically shreds away at the guitar. What great showmen! 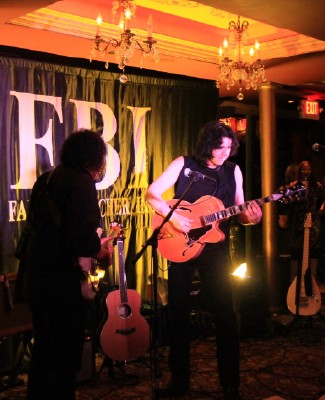 They thanked us for coming and said they were grateful for being surrounded by family and friends. Jon continued playing while Charlie told his stories. They are both great story tellers, which adds to their legendary presence. and connection with the crowd. They played the title track from Farren's CD Old and Young, and made us laugh with great quips about getting older, "Really Charlie? You're still in a band? Really? You're gonna wear that?"

"Impossible World." Jon and Charlie morphed into a jazz duo during this impeccable song. Someday I want to meet George Benson, I love the scat and not everyone can do it. Jon can scat while jamming out with his guitar. This song shows the timeless friendship and collaboration that this duo has tirelessly built over the years. Their timing and reference of respect to each other on stage is something from which we all can learn. At the end, Charlie gave Jon a little shot in the arm, "You ... show off" he said!

FBI told stories all night. They gave the history of "Fool In Love" being their first MTV hit. Jon offered a song out to his favorite bass player, Leland Sklar, who played with him in the band Barefoot Servants. Jon Butcher wrote two songs for the film, Dead Wood, and "Bound For Glory," was the first of the pair he played tonight. 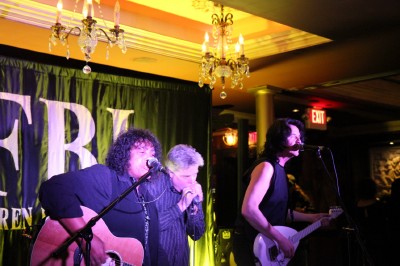 Otto Lenz of Ottomatic Slim was welcomed to the stage to the delight of the crowd. This harp aficionado offered depth and texture to "Heaven On a Railroad Line" from FBI's latest release. The audience was drawn in, sang it out loud, and the set was ended with Charlie and Otto doing a call and response acoustic vs.harp jam !!!

The evening slowed down musically as Charlie got ready to play. What followed was an amazing series of solo works. "You Are The Only One," was soulful and piercing, despite the fact that the crowd was still buzzing. "Wishes," a solo by Jon Butcher, has been a beautiful ballad that is turning out to be timeless. "Mule Driver", the prolific story telling blues specter seeped into the thick walls of this House with memorable greatness. "Deja Blue" the color of love, which is the title track of Charlie Farren's iconic album ended their first set, leaving this intimate group already satisfied with the evening's performance. "Don't go home, we'll be back" Charlie said. More to come ? ! What a great show already.

After the break they came out with, "I'll Be Satisfied, " "Dirty Old Town" and we were greeted by Charlie's 'Silent Guitar" twelve string. Charlie told me the story of this unique guitar in an interview last year. You can read about this brilliant piece of engineering here with the FBI interview from 2011 at the Colonial Theatre in Keene, NH.

There were a few St. Patrick's Day revelers in the crowd. A shamrock tie and a few green outfits were present, but this audience was here for rock and blues. Charlie looked around and said, "You guys are good at singing and it is St. Pat's Day ..." then the dynamic duo of FBI raged into "Stop In The Name of Love." 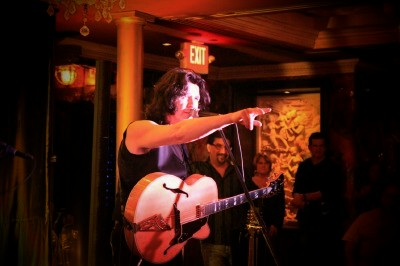 Rowdy voices from the crowd belted out this Supremes soul standard and just when we thought they could not sing any louder ... "Kansas City!" The Foundation Room exploded with Leiber and Stoller's rhythm and blues shuffle getting even the most understated-hip guests out of their stylish chair poses and dancing in front of the stage. A couple was dancing as if they were in the comfort of their living room. A man was holding a brandy snifter in one hand and twirling his partner with the other. It was like a scene from a vintage movie ... swanky blues flowing through a young, carefree cocktail crowd. (This is where I lost my pen, which seems to be happening every other show lately.)

I loved their live version of "Goofy Boy" from Farrenheit. It's a song "all about us," they said. "There's a lot of us old dudes ... playing guitar ... around ..." Anything they say is so quick witted and self effacing, it adds to the show and makes the audience totally at ease. You can't be critical of yourself, or anyone else for that matter, when Jon and Charlie are out there laughing at themselves in such a fun a humble way.  "I keep throwing Jon off by changing the set ..."

The second song, by Jon written for the film Deadwood, "Coalman Mine" was played with Jon on his acoustic and Charlie on the white F-Man guitar that he built. I have the new FBI album and what I love about it is that it covers many genres of music, sometimes in just one song! The lyrics and arrangements are accessible to everyone and timelessly written, straightforward and wise. They announced they'd play a song from this record and was so happy to hear the first few bars of "Soul Mate." This song reaches out to the corners of the room with smooth jazz cool.

Charlie pulled us all together in attention and announced, "I'm gonna teach you a song!" "(Hold Me Tight) Talk Dirty!" This was hysterical! (Who needs a pen anyway?) With the crowd all fired up and laughing, he quickly slipped in the introduction of his friend, blues celebrity, Johnny A. Johnny came out and Jon stepped to the side for a set. Charlie reminded us that "Jon Butcher doesn't step aside for just anybody." 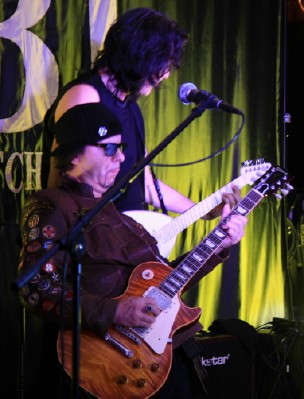 They played a cover which is signature at FBI shows, Dave Edmunds', "I Hear You Knockin." Johnny A. sporting a new guitar, I  heard, used it to tear down the walls with smokin hot rock blues riffs. Butcher came back and the trio of Jon Butcher, Johnny A., and Charlie Farren played a blues rock heavy version of the Temptations, "Can't Get Next To You." The roof of the House was on fire! People were dancing, singing, cheering - partying on!

As quickly as these hurricanes of blues, rock, soul and jazz swarmed this venue, the air cleared and the room settled, winding down the set. FBI closed the show with a song they said they've never played before. They also announced they were going to reunite with the original Farrenheit, including David Hull and John Muzzy. 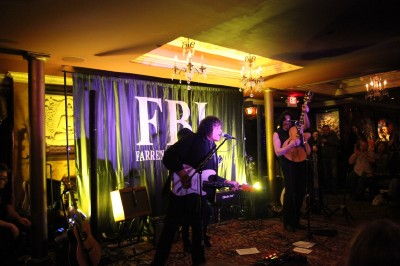 One thing I learned quickly by following FBI was the power of their friendship fueled their music and each other. Nothing in life is a smooth ride, nor comes without problems. Pure joy is to see the light that comes out of our everyday struggles. This is why we love the blues. The blues remind us of who we are, regardless of our material successes. A true friend is more loyal to you than you are to yourself, and doesn't give up on believing in you, even in conflict and disagreement. Along with the grit and soul of their individuality, the friendship of Jon Butcher and Charlie Farren created many sparkling, historic moments at the House of Blues tonight. Their music illuminated the room. The last song they played was indeed, Elton John's "Friends."

~ Many thanks to Jon Butcher and Charlie Farren, for giving me the chance to know living legends. 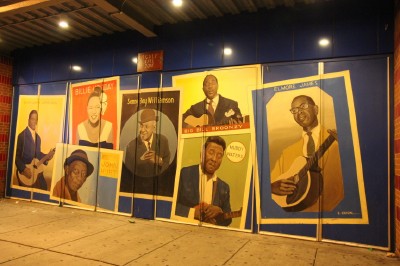