(With Raphael Saadiq under separate review)

Lenny Kravitz kicked off his "Black and White America" tour in Boston last night and it was a knock out show ! It was a privilege to see him in this intimate venue. Lenny told us of his travels in the past several months, played amazing guitar, sang his rockin heart out and showed pure love to this crowd. The band was a powerhouse ensemble performing rock, funk, soul and blues, with even a little jazz, at times. He played favorites like "American Woman", "Fly Away" and "Are You Going My Way", while he blazed the set with tracks from his new album, the magnificent Black and White America. (Released Aug 2011). The light effects and stage production were so vibrant, strobe psychadelic and reflective of the music, that I have one word for this entire show: FIREWORKS. 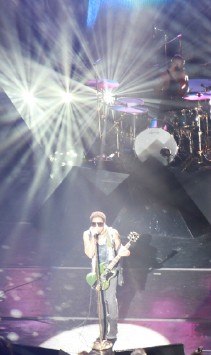 Before the show started, the dark stage had us waiting, with Soul Makossa playing until they raised the curtain. There was a deep roots blues song blaring from the set. The crowd was digging it all. Suddenly, strobe lights took over the stage and a live video feed from the front was projected to the top. "C'Mon and Get It" from his new album kicked off the set. Lenny marched, belted, played his guitar and did the rock star strut. The crowd was wild from the start, on their feet. Lenny's bold invitation was inescapable. The band was just as powerful, with Craig Ross ruling the guitar, there is nothing this tour can't do. 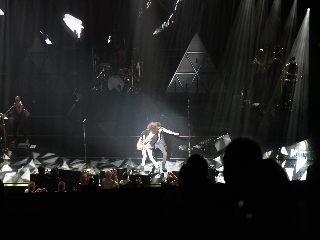 Each of the 15 songs played was hotter than the other and more complicated in its presentation. When "American Woman" came on to the set, the entire theatre shook. Lenny created a community, shaking hands, telling stories of his latest travels. He was warm, friendly, engaging and just seemed so happy to be among his fans.

"It's been a long time since I've been in front of Americans" He said he'd been to Europe, Brazil, Russia ... "I'm back!"

"I hope we can get reaquainted!" 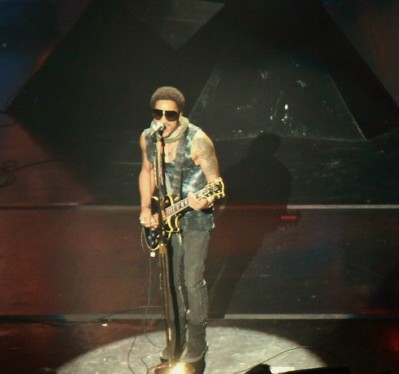 "It Ain't Over Til It's Over" ... "Mr. Cab Driver" ... "Play that bass Gail ..." who was performing in her bare feet ! Lenny hung from the edge of the stage sending rock riffs from his guitar. The triangles from Vanderbuilt's drum kit created a twinkling sound of funky soul magic. The trumpet solo from Ludovic Louis was like a cool jazz set. There was a psychedelic verve going on. The white lights had strobe or mandala shapes that folded into colorful sets too. As Lenny kept saying throughout the night, "All is beautiful." 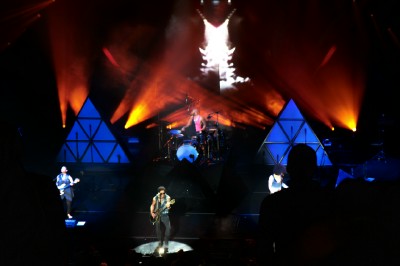 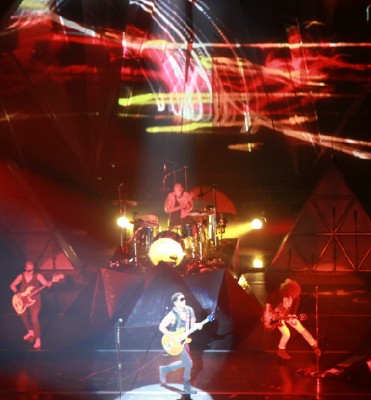 "Black and White America", the title track of Lenny's new album, also was the centerpiece of this show. With a wild mix of funk, blues introduction the song blasted off into a fist pumped power packed event with the crowd singing along to the lyrics projected on screen. The audience stood in ovation. Krav proudly said, "Thank you so much ... black, white and everything in between is all beautiful'. 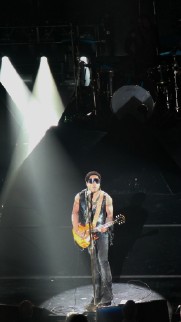 He switched back and forth from the new album to what he called 'old school' songs, that fans loved. "Fields of Joy" had a ripping guitar solo from Craig Ross who continually ruled the stage in collaboration with Lenny and other band members. Lenny and Craig had some wild duos, rock star poses and infectious riffs between them. He announced him a few times, as well as the other band members. Harold Todd's sax solo enthralled us.

To the crowd's delight, Lenny's rock star glasses and shirt were shed before the song "Stand By My Woman". He naturally takes the shape of the songs that he performs, projecting the mood that matches each track. He is a genius showman. This seems to be part of his identity, because he genuinely looks like he is having a blast up there on stage. His joy emanates.

"STAND" was a great pick from his new album and he supported it with a fun video backdrop and clearly stuck to the lyrics so the crowd could learn it if they weren't familiar with his new release. From the same record, "Rock Star City Life" was announced later. I get a kick out of this song. It is just obvious fun, in your face glam and spelled out the mood of the room tonight.

"When Are We Runnin" had Lenny yelling to the individuals in the top seats. "Hey YOU UP THERE!' "C'MON!" People felt the love, they did. I did. No one was left out. This series came together with a trio of the horns and a piano solo by George Laks. These musicians are multi-talented. The fans were appreciative and the night was already a success. 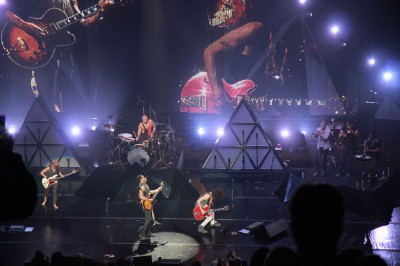 Then suddenly it happened ... the intro notes to the ever famous, signature Kravitz hit ... "FLY AWAY" !

I lost track of my pen at this point. What I can tell you is that the room was filled with pumpin energy; light, screams, fist raising, hip shaking, soaring fan explosions that took off like rockets. While the theatre was still swaying, he ripped right into "Are You Going My Way." He knows how to push the limits and is fearless to raise the level of intensity. This was the epic peak of the show. Lenny stopped and asked, "Are You Going My Way ? Cuz I gotta know... " Special effects and distortion increased the velocity. The strobes had melded into shapes that kept circling the room. The whole scene was pyrotechnic.

In the cool down Lenny reached out and shook hands with the front row fans, ending the official set.

We broke for a quick "Lenny Lenny" rant and the encore started. Lenny came back to say, "THANK YOU SO MUCH" and a fan screamed "YOU'RE WELCOME!" My friend said she saw Lenny "Te-bow".

Kravitz took great care to introduce the entire band by name and unlike some other leads who gloss over the names, he actually said them clearly so we could really understand and see who was being introduced.

I've followed Lenny Kravitz's music since I can remember, but have never seen him live. By this point in the show, I was blown away by his talent, the musicianship of the band and the stunning stage presentations. Most importantly, it was the fans who ignited this fire tonight. These fans were inspired.  Something amazing was created which went beyond the music. This relationship is truly reciprocal and Lenny Kravitz keeps the circle going.

Lenny had a quiet moment after the introductions and said very clearly, maybe more than once:

This was prolific and he said nothing else. As if right on cue, however, a fan from the back yelled out, "LET LOVE RULE!" I turned around and this guy was so deliriously happy that he looked like he was going to pass out.  "Let Love Rule" was the song that was played and it was incredible. 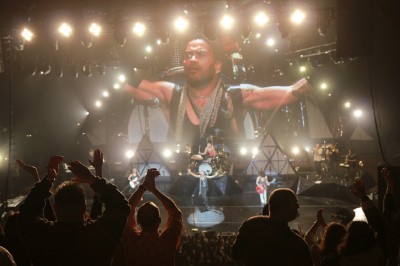 Sax solos, duo guitar solos, the crowd clapping along and Lenny with his arms stretched out to embrace the fans: This was the moment that fans will not forget. Lenny walked through varous sections of the audience, talking with fans, shaking hands, hugging people and eventually danced with a lady on stage. He was reminded several times by the venue that there was a 'curfew' and he moved the show along, even though, it was clear everyone wanted to stay. Mr. Kravitz had a message to send not only in music tonight, but also some life guidance:

We got some funky times comin, but the one thing we can control is our minds and our actions.

The stage closed and we were exited by Hendrix's classic track, "All Along The Watchtower". The world is changing, but we can stand for what's important, keep watch. THANK YOU, LENNY !!! 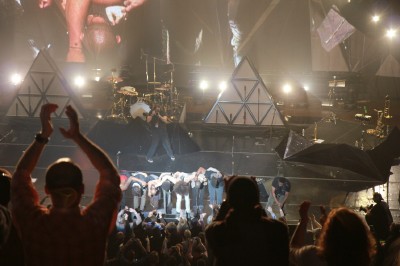 CMon and Get It

Always On The Run

It Aint Over 'Til It's Over

Stand by My Woman

If You Want It

(Rock and Roll Is Dead)

When Are We Runnin

Are You Gonna Go My Way

Push was not played at this show, due to time constraints.

For daily song posts and site updates, join us on Facebook !

Lenny Kravitz's website and music can be found here.