Mexican Americana and the rise of the donkey jawbone.

As they wrap up their tour schedule for the season this weekend, David Wax Museum has had a great year. 'Everything is Saved' is their newest album, which boasts the infectious, "Born With a Broken Heart," winner of the 2011 Boston Music Awards, Song of the Year. They were nominated for the 2011 Boston Music Awards, Artist of the Year. In 2010, they received the (BMA) Boston's Americana Artist of the year, and dawned a presence at the Newport Folk Festival.

On this late autumn night, with a plunk of strings into, 'That's Not True,' the warm vocals and steady harmonies illuminated the Iron Horse tonight. Sax, violin, guitar, bows and creative mixes swept over the crowd. Suz Slezak introduced her, now famous, donkey jawbone quickly in the next song. Other folk bands have used an instrument called the viber slap, designed to sound like a donkey jawbone. So what does David convince Suz to do ? Buy the original tool, the donkey jawbone itself. She becomes one with this instrument and it is her trademark. The band added clarinet, heavier drums and definitive Americana foot stomping to remind me that this is not a blues gig.

Suz elegantly addressed the crowd, "It's so nice to be here with you!" "It's December 1st and we had a hint to wear gold ties !" Sparkle they did. She wore a stunning mirrored holiday jacket with gorgeous accessories and David Wax was sporting red slacks and gold ties were amongst the band. Contemporary glam with Americana sensibility, the crowd was engaged. 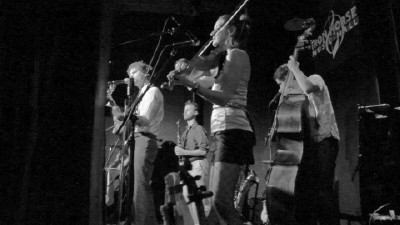 David Wax was equally gracious and introduced the next song with the folk tradition of story telling. "This song was based on a piece of bad advice." "Don't trust a girl who kisses with her eyes open." Suz said they've tried at prior shows to ask the audience to call out pieces of advice, but this faded into inappropriate suggestions and they've closed this part of their act. We cracked up with laughter !

'Chuchumbe' levitated the spirit with movement and traditional Mexican history. I have their new album, "Everything is Saved" and this track is on it. It's a great song, but the live version completely engulfs you. Cheers and hoots from the audience signed it off. The history of the song indicates that it was banned for religious reasons, but dug up from the archive and translated to English.

'Colas!' a tune based on the a traditional Mexican 'son jaracho' song called, 'El Colas' was a quick wit that was slipped into the set under the wire. "You're gonna have a baby and she'll be a Mexican ... " The audience didn't expect it and I could see them all chuckling with laughter. Brilliant !

Gracious indeed. After this song, Suz said she saw kids in the audience, and offered them a special treat. They came to the stage and received chocolates from her wicker basket and won prizes from the band. Ever hopeful, one of the band members mumbled, "Tomorrow's leaders" as they joyfully exited with their gifts. What was the coveted prize ? A donkey jawbone tooth !

Mid-show, a man had bellowed from the balcony, "YES MARIA, YES!"

"Everything is Saved" has a song 'Look What You've Done To Me,' on it that is a slow subtle sweep of the trappings of true love. It is not necessarily joyful or mournful, it is still water and runs deep. On this night, I heard the opening guitar chords for the song and unlike the recorded version where Dave is on lead vocals, Suz takes the lead as they play it live. It was stunning. Suz's vocals were clear and warm, while she can hold a note for extended effect without forcing it ever. She also dawned a brand new fiddle during this performance. There was a quiet sax in the background. This was a centerpiece ballad, as it is on the album. At the end, David Wax stepped aside and proudly said, "Sue Slezak", everyone. The whole piece was impeccable. 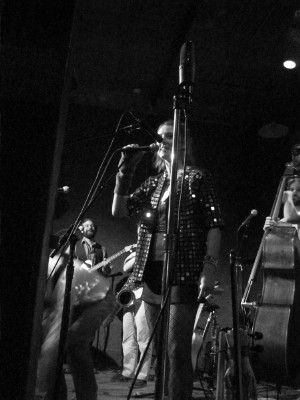 Robert Plant said of his project Raising Sand with Alison Krauss that singing harmonies was the most difficult craft in music, which is why he took on the challenging endeavor. I began thinking of these artists and how gifted they were at singing harmonies together, all of them. I was close to the stage, so I could watch them cue each other and adjust their quarter second entries into the vocals to make sure they were spot on. It was hard work, and it was constant, but the sound was luminous.

I'd like to make a comment about the bass player, Mike Roberts. David said he was from Brattleboro, VT. He laid a great foundation for these songs, like rocks near the water's edge, his strong performance kept the flow of these complicated tracks.

Around nine songs into the set, the show and the venue significantly changed. We suddenly went from a showcase folk ensemble to 'night at the David Wax Museum'. The band members flowed through the audience, the tables, chairs, people standing near the bar, all in awe, what was happening ? One of the band members reached over and drank a beer from one of the tables ! These pied pipers called their tunes, streaming through the crowd and up the Iron Horse stairs while playing their instruments and singing - still in harmony ! The audience was chanting along, 'Beatrice' was the song, but we knew we couldn't keep up. From the stairs, the balcony, the bar-side, the entire ensemble had positioned themselves within the crowd for a folk 'in vivo' experience that was unmatched.

They came back to the stage to sing their award winning tune, 'Born with a Broken Heart,' and it was just as you'd imagine from David Wax Museum.

The crowd roared and sang, all band members singing, instruments wailing and David and Suz were frenetic with exuberance. This band is unstoppable, intense, joyous and warm. They lift the audience with their casual charm, but are serious musicians and technologically gifted. There is a quiet confidence that pervades and takes you along, never pretentious, but when it comes to music writing and commanding a stage, they know exactly what they are doing.

I caught David's expressions in the intro to Unfruitful. He crouched down and scrunched up his face during the warm up, playing his guitar, eye to eye with Suz: Thunderous !

The balcony beckon-er finally he had wish granted. "Yes Maria Yes!" They were electric ... diamonds counter clock wise in your rear view mirror ... were you watching ? In the David Wax kitchen, we are invited in and the folk-soul food is good. At this time of the night, there was a blur of the band exiting the stage and the schedule had the performance closing soon. The musicians left, but the fans did not move. Static, foot stomping, clapping and cheering, the audience waited. David and Suz came out and performed a duet, 'That's No Way to Say Goodbye.' The band joined them and they dispersed throughout the venue again, onto the stairs, flowed through the crowd. They thanked us for supporting live music and the magical year they've had to date. Suz encouraged the fans to sing along with this one, it almost seemed like a closing lulla-bye, from "Carpenter Bird," 'Let Me Rest'.

To learn more about David Wax Museum visit their website at :

And many thanks, to Micah Gummel for your tireless photo editing. 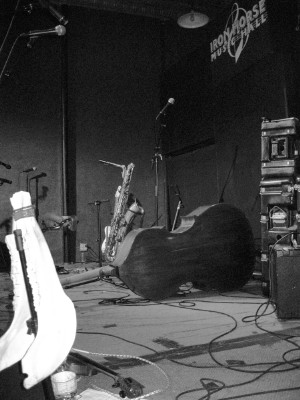