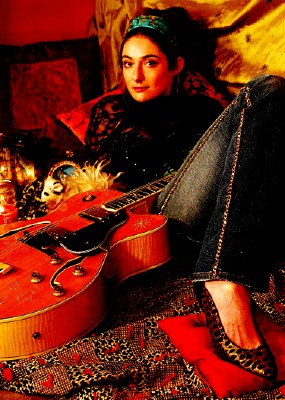 Years ago, I was on vacation and contacted by Olga Munding, a New Orleans blueswoman who was releasing a record called, Whatever You Want. Agreeing to review it, when I returned to the BBR office, I received a beautiful package in the mail. It was a copy of the CD, plus a 'drop card' that if planted, grew wildflowers in the garden. Attached was a handwritten note, thanking us for our work. In the age of instant downloads and digital messages, I knew Olga Munding's connectedness was different.

I kept the note and did not plant the drop card, because following Olga Munding has been a treasure that I wanted to keep close at hand. As the director of the Jessie Mae Hemphill Foundation, and serving on the Board of the Blues Foundation in Memphis,  as well as other important historic blues preservation agencies in the South, Olga keeps planting wild flower seeds wherever she goes.

Olga contacted me again recently to announce a film project she is producing. It is the Anam Cara project. Inspired by Celtic wisdom and philosophical works, it is a film about 'soul friends.' With such an important concept to discuss with readers, I asked Olga if we could run an interview on her work. Between busy camera set ups and costume designer consultations, she was kind enough to correspond with us personally.

BBR: HI Olga, Thanks for spending some time to connect with us. Tell us about your new film project!

Olga: The new film project is the brainchild of myself and director, cinematographer, Declan Ryan. It's what we call a "music film," in that it is NOT a music video (no lip syncing in various outfits).

Olga: The film is comprised of three songs of mine, that actually serve as a character in the overall story, a "Jimminy Cricket" type character. There is no real dialogue, so it is music driven and the story is called Anam Cara, which is celtic for "soul friend". You find your true Anam Cara after you have endured the journey of finding your true self. Only then will you find your soul friend, someone with whom can share the deep treasure and secrets of the soul.

Olga: The story in the film will be similar in that it is the trials and tribulations of finding your true self. Much is drawn upon on my own experiences and there will be many layers of symbolism within the images. There hasn't really been anything like this done before, but we anticipate there will be many who will do their own music film after we do! So since we are pioneering this, there will undoubtedly be challenges along the way, but I welcome those - because every challenge offers an opportunity for a creative solution and for growth, not only as an individual, but as a crew. We have many wonderful talented film people involved and I enjoy the process so much. I am always learning from everyone and I love that! So many angles and departments and aspects to know more about...

More info is at www.anamcarafilm.com

BBR: I am always impressed with your knowledge of blues history. How did you get started in your journey of these great artists?

Olga: Fate, really. That's the only way to explain it. The way I met Jessie Mae Hemphill was otherworldly and she knew it, as did I upon our first meeting. It was really through our kinship that I got into the whole blues history aspect, really because I promised her when she passed that I would do all I could to keep her legacy in deserved place of history. Our next big event will be the Alan Lomax repatriation of her grandfather's music and photos, Sid Hemphill, the granddaddy of North Mississippi music, to the Senatobia Public Library on October 12, 2013. This will ensure that the music will be there for children, for the community, for generations to learn about, be proud of, and share with each other. There are some amazing individuals involved in making this happen, in preserving the music history of North Mississippi. This is a community event and we all share in that together. I can't tell you how excited I am about having Sid Hemphill "come home". So awesome, really!! Jessie is smiling in heaven.

Olga: I am presently serving on the board of directors of the Blues Foundation in Memphis, representing educators and educational institutions. You know, life leads you in amazing places and to to the right people if you live it, trust it, and are present with it. This has been very much the case for me, especially in this regard.

BBR: Who are the icons of women in blues for you? Why?

Jessie Mae Hemphill!! She was family. Also Memphis Minnie because she was one of the first women guitarists and songwriters and so very brave, all she did not only with her music and her life, but braving a man's world. Jessie was like that too, and so this is why I love them both.

BBR: Talk to use about the Krewe of Muses!

Olga: Muses is a blast! I especially enjoy making the glitter shoes! At present I am taking time off from riding as I have gotten so busy, I just don't have the extra time. I will still make shoes though-- great art project and a lot of fun. I want to make a series of Django Unchained shoes this year, maybe even a "What Would QT do?" shoe which I might give him at some point! That would be funny, he'd laugh at that!

BBR: What was it like to record with Cody Dickinson?

Olga: Cody is very intuitive musician and we relate and harmonize very well together, musically. I never had to say or explain anything to him, he just "knew" what I wanted and where I was going artistically.

BBR: How is your record, "Whatever You Want" doing? We loved it, as well as the holiday tracks you released.

Olga: Three of the songs from that album will be in the Anam Cara Film. So it lives on! I have several albums worth of songs that have not been recorded and might do at some point. The industry has bottomed out, people don't buy cds anymore and rarely download an entire album, so I am not sure what the payoff would be to invest in another album when it's so hard to recoup that. Did you know that artists are paid 2/10000 of one penny per stream?? (Spotify and the like of it.) Yeah, how are you supposed to make a living on that?

Olga: If and when I do another record, it will be purely for artistic reasons, not because I make a living in music. I actually make a living in movies! This is what I do now, acting, producing, directing - you name it. I also look forward to creating music for film, hence also the Anam Cara Film project. It all ties in together.

Olga: I will likely do another Christmas EP, which I intended to do this year but ran out of time! I have some wicked blues versions of some holiday classics. Christmas music is annual, so maybe I'll record the songs at Christmas and release them next year...hmmmm so much to do!

BBR: What do you think of today's pop music and how young women are portrayed in the music world? Do you think it's headed in a good direction or need to get back to some basics?

Olga: It's not about talent anymore but product placement. The industry is bottoming out. We'll see what happens... I am just so grateful that I am able to work in film and television, otherwise I'd probably turn out a bitter musician! No really, I don't ever want to lose the joy of music because it is a huge part of my life and how I identify myself. I have been writing songs since I was 4! I decided to focus my career in another way so that I will always have the joy of music and not the icky part of the business.

BBR: We're from the North and haven't been able to see a live show from you. What is it like? Who do you like to perform with?

Olga: Gosh, I usually perform solo. I never play a song the same exact way twice and certainly don't sing it the same! I just try and be honest with my emotions, sing from the heart, offer up my love and joy, and that's all I can do. It's been interesting seeing people's reactions; often they get emotional or even cry! I get choked up when I see it, so many times I can't look at people while I am singing because their emotions resonate back to me and I start crying! It's a trip, but it's a good thing. I am moved that I can touch people that way in their hearts. Music is first and foremost for healing. It's the language of the Universe. I am but merely one interpretor of it, and I chose to create music that touches and moves people on a soul level. It's the blues really, because that's what the blues is at it's core. This is how I can help, my little contribution to the world if you will...

BBR: Tell us about the music and culture of New Orleans. I've never been there and am forever curious. It seems like the core of such great traditions that can't be replicated elsewhere.

Olga: New Orleans is an amazing artistic and fun loving city! When I moved here 12 years ago, I never looked back. This is and will always be my home no matter what. You should come for Mardi Gras!! The best holiday ever!

BBR: THANK YOU for your time and support of the listeners and this website over the years! It is always so wonderful to hear from you! Let us know if you ever make the trip North :) 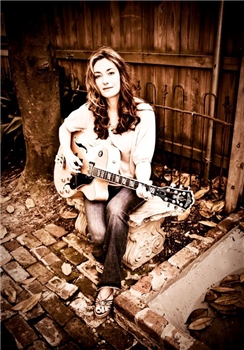