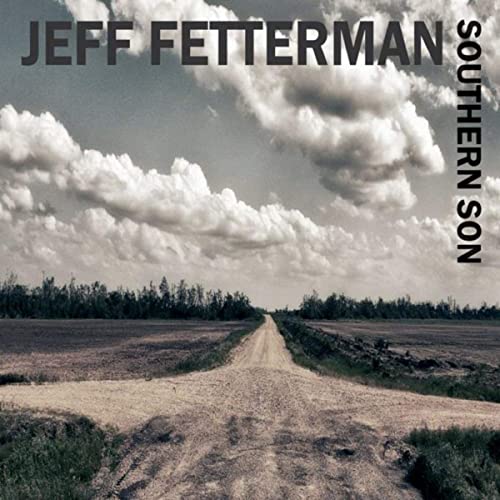 Music artists often prefer, once they establish themselves in a certain circuit or have managed to build a certain amount of fans/followers, to stick on what they do best and what provides them that blanket of comfort that guarantee them a lucrative return. In some respects, this is understandable enough, when you are an independent artist that cannot rely on a record label's financial support but the down side of it, it is that this philosophy kills creativity.

There are also fortunately those that rather prefer to follow instead their musical growth without disrupting their artistic integrity and keeping on exploring new musical highway, just like the Pennsylvania-born Blues/Rock and Funk guitarist and singer/songwriter Jeff Fetterman.

Fetterman's brand new album, called Southern Son, sees the American artist steering his musical vision to a more expanded level, through a fascinating journey that takes the guitarist to explore the roots of the Funk and the Blues of the 70's, in an imaginary walk through the streets of Chicago, Memphis and Harlem, N.Y., capturing the sounds and the atmosphere of those places and of that decade, to then translating them in layers of more contemporary sounds, still in true Jeff Fetterman style.

The presence in the driving seat of such an experienced multi-instrumentalist Supremo like Christoffer "Kid" Andersen, who has played in, produced, mixed, recorded and mastered Southern Son, it was certainly an important factor in the build-up of Fetterman's new record.

The American artist, through Southern Son, captures accurately all his passion and love for music at 360 degrees, through a captivating record that showcases Fetterman's remarkable versatility in many different aspects of his artistry.

Fetterman is literally unstoppable, on this new album; songs like Memphis Sky and Feels Like Rain display the guitarist's natural talent in writing Rock ballads of a certain depth, with excellently crafted bridges and choruses that, surely enough, would make many Rock based radio station's happiness.

The American guitarist and singer/songwriter has repeatedly shown, through the years, his personal debt of gratitude in his musical formation on previous records but on Southern Son, such love for the genre gets expressed on an even more higher level, thanks to some inspired songs like Living With The Blues, Ain't Got You and one of the bonus tracks that close the album, the instrumental Southside Blues, where the presence of the Horn Section made by Doug Rowan on saxophone, Ric Feliciano on trombone and John Halbleib on trumpet, it helps to elevate even further the depth of said songs.

The American guitarist and singer/songwriter confirmed once again, through Southern Son, to be one of the most inspired, talented and versatile Blues/Rock and Funk artists of the current generation. Jeff Fetterman at his absolute best!