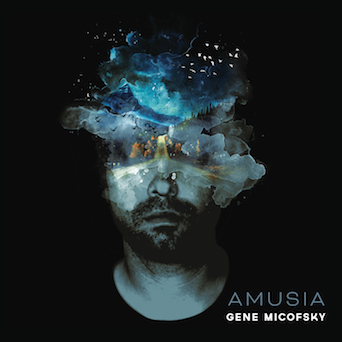 It is safe to say that love for music runs deeply in the DNA of the South Philadelphia-born singer and songwriter Gene Micofsky. After a solid start of his music career as a composer for films and TV, the next inevitable step for this very talented young artist was to release his very first solo record.

And what a special record his debut album called Amusia truly is! Released on 12th October on the major digital music platforms, Amusia is a record that reveals an artist with a deep understanding, appreciation and knowledge of music at 360 degrees. Adding to those qualities a natural inner talent as a singer and a songwriter, one cannot stop wonder really why Micofsky has been waiting so long to reveal his many skills as a musician to the world.

It is a very difficult task to handpick one or more highlights from an album provided with such a remarkable abundance of great songs like Amusia. Lyrically, Micofsky’s record exudes honesty and artistic integrity in each of the tunes included in Amusia, from the foot-stomping Blues of the album's first single, Fist For A Hammer right to the closing track called Not That Strong, a song of great, strong emotional impact.

As a singer, Gene Micofsky is a true revelation; his vocal range has got an incredible adaptability to Folk, Roots, Rock and Blues and the artist's singing style carries a certain honesty to it that makes you fall in love with his vocals from Track 1 of his record.

Certainly, working in the media world, for soundtracks for films and TV has contributed to sharpen Micofsky's compositional skills, intuition and instinct in building the right arrangements for the right lyrics at the right time. Songs like Highs And Lows, with a splendid sonic carpet where the use of strings and pedal steel guitar elevates the intensity of an already masterfully crafted tune or Levy, where a sound of an old turntable playing music of a bygone era introduces a tune based mostly on a keyboard line that gives almost a classic feeling to this song, speak volume about the many skills of the talented L.A. based artist.

Amusia is a record for true connosseurs and lovers of music of high quality. Micofsky’s debut album is a triumph of artistry in the full sense of the word and a little but very precious musical gem to treasure for years to come.

Amusia is out now and it is available on Amazon