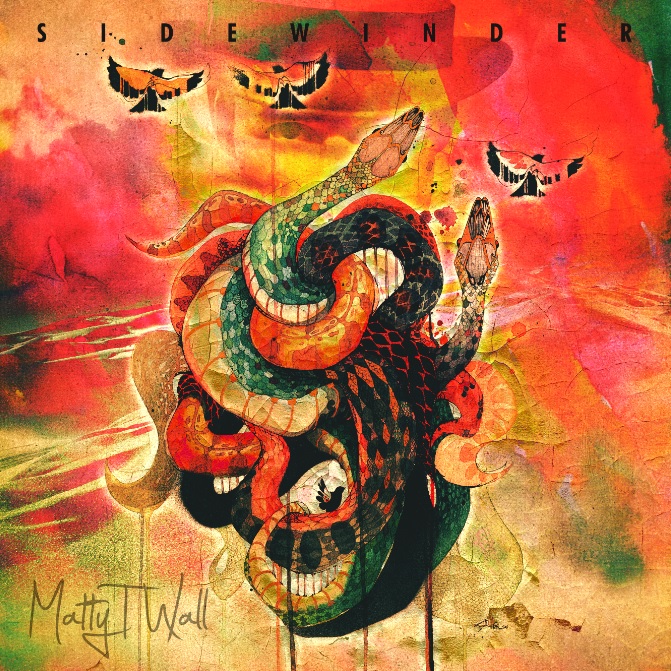 In a time of the world like this, where music labels are often confining musicians to a sole musical niche, Australian guitarist, producer and singer/songwriter Matty T Wall embraces instead fully the musical prospect to go gun-blazing to a global perception of what music should sound like, rather than restraining his talent and do something "Commercially right", by mashing up several music styles with no strings attached, because that is how the artist feels and perceives music. In the most organic, immediate and instinctive possible way.

Starting from the idea that the guitarist's new record should represent the way that Wall sees his musical creativity moving forward, without necessarily picking up from where he left on his fabulous debut album Blue Skies, Wall's second album, called Sidewinder, is the most natural and spontaneous progression to the Australian artist's debut album.

Produced once again completely by Wall himself, just like on Blue Skies, Wall's new offering shows all the intriguing and fascinating multi-faceted aspects of the singer/songwriter's sonic evolution, this time superbly supported, on the mixing side, by one of the best engineers and producers in the world, Bob Clearmountain.

Sidewinder works extraordinarily well in many ways. The Australian artist combines the respect for his Blues roots with his love for Rock, R&B, Soul and Funk with great elegance and finesse, balancing the songs included in the album in such a way that, to listen to the record, it becomes a highly entertaining past time, both for new and old fans of Matty T Wall, just to discover the way that Wall unveils a new angle of his musical world on each song, a little like opening a Russian Matrioska.

While Blue Skies saw moments of pure sonic escapism in some of its part, Sidewinder launches a clear statement of talent through songs combining moments of incredible melody and great intensity, with the Australian artist displaying not just his outstanding ability as a guitarist, but also as a singer.

One can feel the labor of love gone on Sidewinder, by the way Wall applies his craftmanship on each and every tune included in the record. From the high octane, foot-stomping instrumental Bluesy opener, Slideride, through the surprising closing tune, a Hip-Hop-meet-Blues cover of New Orleans artist Chris Thomas King, called Mississippi Kkkrossroads, Matty T Wall guides the listeners to a Pindaric flight into his musical background, showing exactly, through his songs, the place where he comes from, as a musician and those where is leading to.

Some of the vocal deliveries of the album are of a truly high quality. From Sam Cooke's cover Change Is Gonna Come to a spine-tingling vocal performance, on acoustic guitar and strings only of a tune called Leave It All Behind, Wall entertains, excites and moves the listener with style and class, showing that he is already right there, at his young age, in the restricted circle of masters of contemporary music.