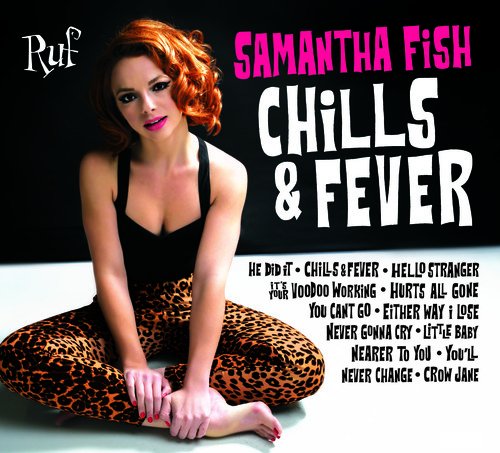 If there was an album title that would have explained in a better way the magic moment that the American artist Samantha Fish is living right now, no other title would have been better than Chills & Fever, Fish's brand new album.

Two words that define perfectly the contagiously beautiful musical journey of the artist from Kansas City, Missouri, in an album that sees Fish taking a momentary step away from the Blues and Blues/Rock and embracing instead 60's and 70's vibes and atmospheres, all enriched by echoes of Northern Soul, R&B, Soul wonderfully executed by a performer at the peak of her artistry.

For Chills & Fever, Fish decided to join forces with some of the finest musicians in Detroit. In her new musical challenge, members of the Detroit Cobras were recruited, a band that has made through the years a real mark in the Midwest punk/blues scene. As extra added bonus, Fish also added a superb horn section made by Travis Blotsky on saxophone and Mark Levron on trumpet and by spending time with these musicians, Fish discovered to have in common with them a great love and respect for the Motown sound and the Soul and R&B vibes of that musical era.

What came out from the recording sessions in studio, with the supervision of producer Bobby Harlow, was an astonishingly beautiful album of covers of hidden gems of those two decades, where Fish's artistic stature, especially as a singer, rose to a complete new level of class. The choice of the songs is somehow surprising, with the American artist digging at times into the songbook of artists universally well known like Tom Jones, Allen Toussaint or Lulu and some other times, choosing instead more obscure songs out of the music catalog of artists like R&B's inspiring Barbara Lewis or producer, singer and even occasionally orchestra conductor Van McCoy.

Many have known for quite some time Samantha Fish's great talent as a guitarist and as a singer on previous records but, on Chills & Fever, the young artist goes beyond excellence on both counts, especially on her vocal performances. The way that Fish is able to modulate her powerful voice through different genres is mesmerizing and her singing style is right up there with the best female singers in the current music business. To sound so fresh and contemporary and still maintaining a classic feeling to her delivery, is the clear sign of an in-built talent.

Chills & Fever is the signature piece of Samantha Fish's career and contains an astonishing and mature display of musicianship, given the young age of the American artist. Moreover, this album is the impressive rite of passage of an artist that is growing stronger and stronger on each passing record and will certainly astound everyone even more with her talent in years to come.

Chills & Fever is out now via Ruf Records