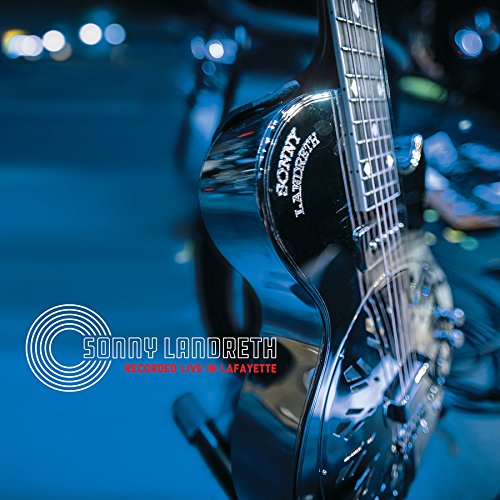 A live album represents always a special moment in the career of any artist. It's an opportunity for them to stop and imprint on a record the past and the present in the life history of a musician and feel the way in which their artistry has grown and developed through the years.

Somebody that certainly knows how to pull off a live performance is the Louisiana Guitar Maestro Sonny Landreth, a phenomenal musician whose ability, not just as a guitarist but also as a singer and a songwriter, is so internationally renowned that all the biggest names in the history of blues and rock and roll wanted to work with him, from Eric Clapton to Kenny Loggins, from Mark Knopfler to B.B. King, just to mention few of them.

Recorded Live In Lafayette is Landreth's third live album, following his unanimously acclaimed 2005's Grant Street and his 2007's Live At New Orleans Jazz one. For this special occasion, the Mississippi-born guitarist has decided to bring everything back to the place he calls now home, Lafayette in Louisiana, by performing for three consecutive sold-out nights at the local Theater. The result is a stunning double album in which Landreth has recorded two separate sets, one acoustic and one electric, a little like showing two sides of the same artistic medal.

Supported by his tried-and-true Band Of Brothers, David Ranson on bass, Brian Brignac on drums and percussion plus the addition of two other exceptional Special Guests musicians like Steve Conn on keyboards, accordion and background vocals and Sam Broussard on guitars, Landreth offers, on this live recording, a surprising and extraordinarily intense performance on both sets. The acoustic one is packed with some real gems. Key To The Highway and The High Side are very impressive in their delivery, with the latter showcasing Landreth's enormous finesse as a guitarist, with his fingers flying as light as a feather on the instrument. Creole Angel gets a complete new make-up, in a version that, strangely, sounds somehow even more emotive than the original. Bound By The Blues, from Landreth's latest studio album is lyrically among the best songs that the artist has ever written and the quality of its live rendition is as strong as the studio original. The closing and highly entertaining acoustic version of The U.S.S. Zydecoldsmobile is pure fun to listen to and one can sense immediately that the whole group of musicians on stage are having a great time loosing up, giving to the song that genuine immediacy and that feeling of a honest, creative impromptu brought on stage by Landreth and his band.

The electric set is the apotheosis of Landreth's artistry. Back To Bayou Teche has got those wonderful 70's vibes so close to the heart of bands like Creedence Clearwater Revival, for example, with Landreth's unleashing even further not just his talent as a guitarist but also his skills as a singer, providing, in our opinion, the best vocals of the album overall. The trilogy of instrumental tunes present on the electric set explains in full why Landreth is considered one of the greatest guitarists of this generation. The Milky Way Home is an extraordinary combustion of styles, half a way between progressive and instrumental rock, with a breathtaking uptempo of a mesmerizing beauty. Brave New Girl is performed with such class and intensity while Uberesso through its fast and furious pace, sees Landreth's guitar geniality expressed in full throttle in three minutes plus of absolute rock poetry.

Walkin' Blues has got plenty of swagger, with Landreth and the amazing musicians accompanying him on stage delivering another highly impressive performance. Landreth then leaves center stage, on the closing song of this truly wonderful live album, to his fellow musician and friend Steve Conn, that fires up the crown even more through one of Conn's most popular tunes, the foot-stomping boogie The One And Only Truth. Landreth and the band provide another incendiary performance, the perfect way to end a pyrotechnical live album like Recorded Live In Lafayette is.

Sonny Landreth is such an accomplished artist that doesn't need to make any musical statement about his class, talent and versatility and never will need to make one. But if he really had to, for unknown reasons, then nothing better than the Recorded Live In Lafayette album could represent the stature of a musician that has maintained the same love, respect, passion and genuine approach to music since the beginning of his career and still going. A live album to be played to posterity over and over again for many years to come to remind them not just what the right attitude to music should always be, if you want to become a musician, but also what an immense musician Sonny Landreth is and will always be.