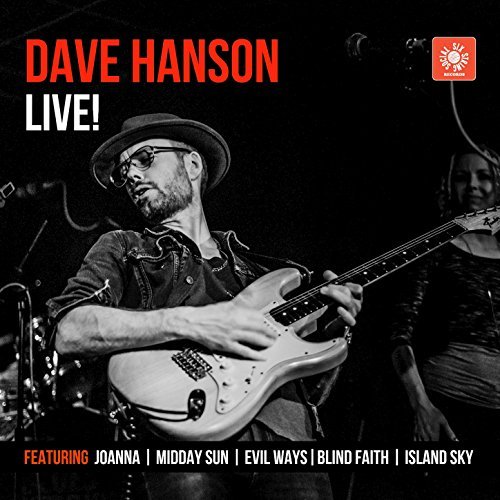 When in 2016 the British guitarist and singer/songwriter Dave Hanson released his debut album Almost Horizontal, the UK and European Music Press welcomed very enthusiastically the prospect of having a new creative force like Hanson bringing more artistic sinergy and ideas into Global Music.

Hanson's debut was a skillful and refined mainstream record that incorporated to its rootsy music formula different layers of sounds, from Rumba to Reggae, from 70's Glam to 90's Rock, still maintaining a very recognizable music trademark on its own.

Thanks to the high praises received for his first album, the Leeds-born artist has been intensively toured in the last year the whole of the United Kingdom and as a consequence, his new release, a live EP album simply called Live!, captures some of the finest moments of Hanson's Almost Horizontal Tour.

Including 4 songs from his debut CD, plus a surprising cover version of Carlos Santana's Evil Ways, Live! is a record that brings freshness to some of the songs on Almost horizontal, like the opener Joanna or Midday Sun, the latter performed in an even more "Caribbean" style by Hanson and his live band.

Evil Ways, Santana's cover, offers from a musical prospective, the best moment of the album. The live band accompaining Hanson and the guitarist himself showcase great musicianship, with Hanson also providing, on this track, the best vocals of the whole EP.

The song Blind Faith is executed in a very polished way, through a live version very close to the studio original. Fortunately, Hanson manages to re-capture a proper live vibe to the record with the closing song Island Sky. Hanson's guitar sound is more raw and dirtier than any other songs captured on this live performance, bringing to the tune itself that strong musical dynamic needed on any live albums.

Live! is a record that portrays a very happy moment in the career of the young guitarist and singer/songwriter and displays a different and, at times, playful side of his music. A lovely musical memento of a very successful year in music for Dave Hanson.

Live! is out now and it is available via Amazon