Our website has not, very often, come across to artists of such an age like Quinn Sullivan that, at 17, has got already a decade of intense music activity behind him. Blessed by the cream of the music industry (B.B. King and Buddy Guy, among others) and labelled as the next giant of blues music to come, it must have not been easy to carry such pressure lately for somebody that, although blessed with enormous talent and great experience like Quinn Sullivan, still remains, after all, a seventeen years-old young man. 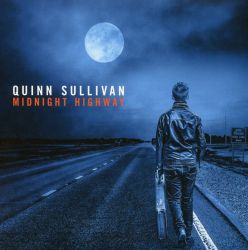 There were a lot of expectations rising from Sullivan's fans for his new album, especially after his 2013's splendid second effort called Getting There, an album that had enhanced once again Sullivan's incredible ability as a blues/rock guitarist and his total devotion to a genre he loved straight from the start of his career.

Midnight Highway, the young Guitar Prodigy's third album just released, it's an album that will take many blues purists by surprise, solely because it is a record showing more angles of Sullivan's vision of music in its entirety. The boy that used to take his guitar with him at every blues concert with his parents has become now a young adult, living and loving the music of the present and adding to them elements of blues annd rock coming straight from his musical DNA.

Sullivan has grown up enormously, on his brand new record, both musically and vocally. His singing style is now more sharp and powerful, something that it may be expected to be found in somebody going through a crucial age transition like the one the American artist went through since his previous record (when he was 13) but, nevertheless, be taken necessarily for grant. Sullivan's music vocabulary, on his new album, stretches beautifully from his blues and rock roots to R&B, funk, folk and Americana, the whole executed with remarkable precision and ability by this incredibly gifted musician. A musician that has now grown also an appetite for songwriting, by penning three of the tunes on Midnight Highway, Eyes For You, Going and Lifting Off, all showing different aspects of Sullivan's musical background but still united by a common denominator that runs through the whole album, which is the concept of love in general.

The American artist balances beautifully, helped by his producer, road drummer and musical partner-in-crime Tom Hambridge, an impressive set-list on Midnight Highway, balancing cleverly different vibes and tempos also thanks to his immense skills as a guitarist. His cover version of The Beatle's classic While My Guitar Gently Weeps maintains respectfully the structure of the original, still carrying though Sullivan's unmistakable signature sound.

The closing instrumental of the album, Buffalo Nickel, is one of the best tunes ever that Quinn Sullivan has penned in his career so far. The 8-plus minutes of this tune display in full the magniloquence of the American artist's ability as a guitarist, through a breathtaking performance that clearly explains why, even somebody like BB King, never exactly keen to let his famous Lucille to be played but anybody else but him, allowed once this prodigious artist to play it when the two shared the same stage, back few years ago.

Midnight Highway is certainly a game changer album for Quinn Sullivan. While some fans may perceive this record as a step back from Sullivan's previous records, this album shows instead a brave and highly talented artist concentrated in finding the style of music that comes more natural to him, as a guitarist and as a musician in general. The young Guitar Maestro is at a stage of his career in which steps like these are needed to identify clearly where his music is going and where is taking him. A journey that is perfectly natural, in the artistic progression of any musicians and especially at Sullivan's age.

Quinn Sullivan's new album is played, sang and recorded at a very high standard and, most important aspect of all, Midnight Highway is a record open to everyone keen to listen and appreciate music of a certain quality, performed with great honesty and integrity. A true career-defining moment in Quinn Sullivan's musical journey.