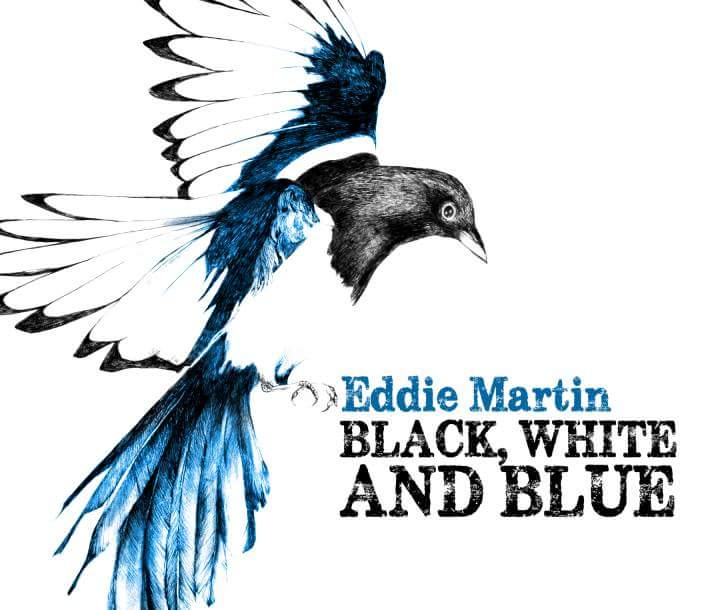 Many have tried, through the years, to give a real definition of what "Living The Blues" really means. Often, many fans or even music press have labelled the genre as one expressing sadness, loneliness, living tough times or going through rough patches in everyday's life.

The English Blues Maestro Eddie Martin has got a much more lucid and wider vision of what Blues and being a Bluesman is all about. His brand new album, called Black, White and Blue is a clear statement of how much, in Martin's eyes, the genre has been, and still is, the motherload for Black Music, Rock &Roll, Jazz, you name it.

Black, White and Blue is an entertaining, exciting, vibrant and irresistible record for many reasons. The album showcases an artist at the highest level of his musical ability in each of the 10 songs present on the record, no matter whether it's through Martin's harmonica, his Telecaster Custom or even his Slide Guitar.

Eddie Martin's songwriting is sharp, ironic at times, even mellow on a couple of songs but it's strong and written with intelligence and wittiness at the same time. Moreover, his storytelling is definitely miles away from the common stereotypes that expect Blues stories to be linked uniquely to sad aspects of human lives in various forms.

The one-two that open Black, White And Blue is pure dynamite. Mississippi Sound has got that unstoppable foot-stomping tempo typical of the great John Lee Hooker's style but executed by Martin and his Power Trio spectacularly well, with Martin's slide guitar sounding like heaven. Same goes for Angry, a tune with a strong rock influence, with Martin's lyrics as cut-throat (..politicians don't stand for what it's right...) as it is his thunderous Stratocaster guitar sound. A true highlight of the album.

The choice of the album title has not been casual for the English artist's new album. Black, White And Blue are the three colours through which Martin sees the way the Blues has confluenced itself into other music genres through the years and the record's title-track, through its clever pastiche of blues, rock and hillibilly, is the best way to sonically illustrate Martin's musical views.

One of the many aspects of Martin's talent is not just linked to his extraordinary ability as a musician but also to the maturity he has reached as a songwriter. Black, White And Blue is an album that sees an artist and a man sometimes struggling to understand the illogicality of politic or religion, as he so well does in the powerful closing tune of the album, It All Depends but also able to talk about love, as in the case of the splendid, soulful ballad I Choose You.

There are a couple of moments of the album which show a further and more funny angle of Eddie Martin as everyday life's perfect raconteur. Too Much Choice reflects on the irony of a modern society that offers media platforms to many and meaningless music genres, except the blues. It's a truly excellent tune, with a great funky feeling coming from a fabulous Rhythm Section made by Tom Gilkes on drums and Zak Ranyard on bass, a Section that sparks like a diamond, musically speaking, not just on this tune but throughout the whole album.

I've Lost My Phone is a sublime concentrate of swing, jazz and, most of all, the great intelligence of an artist that knows exactly when to take himself less seriously. The tune is about losing a mobile phone which means, in nowaday's lifestyle, the end of the world for many individuals. Where Martin's tone can be ironic in his lyrics, the musical structure of the whole track is first class.

Despite the variety of themes present on the album, there is a definite unity on Black, White And Blue. The Blues is the element that brings all together and the way that Martin balances all the different music tempos, moods and styles, is the work of a very inspired artist.

Eddie Martin is and has been an English National Treasure and Blues/Rock Institution for the last quarter of a century. Through this new record, the 10th studio album of his glorious career so far, Martin definitely chisels his ultimate musical masterpiece to date. Black, White And Blue is his First Class ticket for Blues Worldwide Excellence.

Black, White And Blue is out now and can be purchased via Eddie Martin's Official Website or via Amazon