Music is and will always be the best and healthier therapy to help fighting personal or professional issues in one’s life. You can be either a music fan or an Average Joe or a very skilled and talented artist like Aynsley Lister. 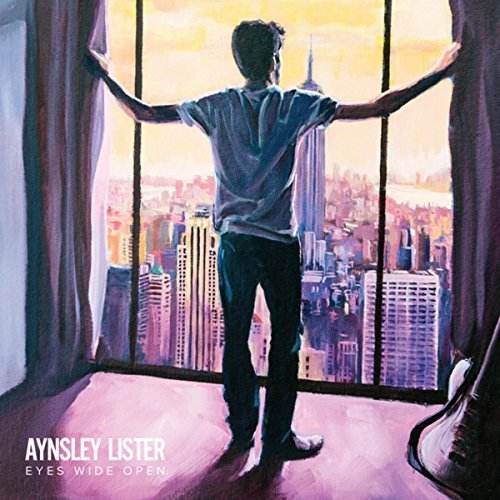 His brand new record, Eyes Wide Open, the eighth of his career, displays an artist that seems to have finally found the perfect balance between inspired song-writing and his personal passion for blues, rock, funk and soul.

Lister’s new record is one of the most honest and open autobiographical records that Bluebird Reviews has heard for quite some time. The strong will from Lister to re-connect with music and his fans transpires immediately through the album’s opener, All Of Your Love. The tune has a crisp, bluesy attack and the main guitar riff that support the whole track is a perfect reminder of the artist’s big passion for the Led Zeppelin’s sound.

The English artist has always had the gift of being able to tell great stories, either on a more cinematic level or a personal one but on Eyes Wide Open, Lister is certainly on the top of his form.

The way he portrays a night in a smoky bar somewhere in Sicily, Italy between few dodgy individuals playing cards in Il Grande Mafioso is simply sublime. The sound of an acoustic guitar serves as the perfect intro to the tune, to then switching to an almost Ry Cooder-esque rootsy guitar sound to set the right climax to Lister’s lyrics.

The next track, Won’t Be Taken Down is one of the key moments of the album where the quality of the artist’s song-writing takes off decisively to another level. This blues ballad offers a clear statement on the way that Lister sees the world, a modern environment where jealousy and competition take over human relationships, in the name of greed. Lister’s guitar sound expresses great intensity and speaks volumes on the bags of talent the English Guitar Prodigy is naturally gifted with.  To top it all, the quality of his singing style goes up two notches and makes of this tune one of the true highlights of the record.

Eyes Wide Open is an album that shows how brilliantly the English artist is at ease with different music genres, as previously mentioned. Time turns the music tap firmly into a more rock tempo, in a very uplifting song about the only opportunity we have, as people, to live our lives at their very best, trying to maximise every moment we live right to the very end. One of Lister’s fine moments of his entire career as a singer, a musician and a songwriter.

Every different style of music provides the ideal soundtrack to Aynsley Lister’s lyrics and the different sides of his artistic persona. Other Part Of Me is a superbly crafted song, where the artist verges more through a soul tempo, chiselling the song perfectly to adapt his singing style to a tune that has the most uplifting lyrics of the album.

In Lister’s universe described on Eyes Wide Open, among stories of love, abandons, rises and falls, the story behind the song Kalina deserves a separate mention. It’s a song that defines entirely how much love for music and for his fans mean for the Guitar Maestro. Kalina is the true story of one of Lister’s fans that took her life in a moment of desperate depression, few days after Lister met the young woman at one of his shows. This tragic tale of a fragile soul is narrated with respect and love by the English artist, certainly one of the most accomplished and intimate moments of the album. Lister’s guitar sound is as passionate and honest as his lyrics are in paying his homage to this young woman’s life, victim of one of the biggest diseases of modern society.

Eyes Wide Open frames minutely a tough period in the life of the gifted British artist, in which he had to deal with pressure, quests for comfort in his personal life and sudden realisations about everything surrounding him. Every note coming from his guitars are played with equal joy and pain, depending by the mood each song is set up to, during the album. The greatest strength of Lister’s new record stands in his honesty, both musically and lyrically, something that has become more and more a true trademark of Aynsley Lister’s music through the years. It’s a record that fully reveals the core and the eclectic personality of an artist that, through this album, has reached the highest level of artistic maturity never before reached in his previous works. A career-defining moment for this hugely talented artist.


"Buy a record, support the artists, preserve the future of music"