The Kitchen Sink - Omar & The Howlers 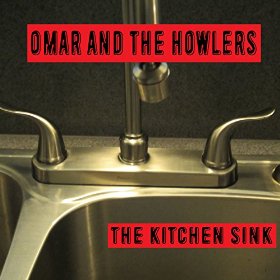 There are many ways to remember the people we loved in our lives. Those very same people who played an important part for us and left an inner and indelible mark in our existences.

Omar Dykes and his Howlers decided, through their new album, to honor some of their friends they lost in 2014 in the only way that suited them the most, through music. Twelve songs that show a perfect caption of the band's music philosophy, throughout their whole career. Every Omar & The Howlers album has always an intense, visceral, direct and distinctive sound and, above all, always respects the music roots closer to the band's hearts.

At first, The Kitchen Sink may seem an album divided into two segments, with seven songs all completely original and five covers. Given the theme of the album, though, even the choice of the covers makes lyrically sense and the whole album comes together as a unique core. From the Western music shades coming from I'll Keep On Dreamin, through the Country-esque and easygoing Dixie's All Night Bar until the firing, in every sense of the word, Fire And Gasoline, where Dykes' guitar offers sumptuous, delicate arpeggios, belonging to, perhaps, the finest moments of the repertoire of this giant of the blues.

Even when Omar & The Howlers do covers, they manage spectacularly to put their music signature on each songs, making them sound like they are almost their own. Dykes proves, once again, besides being a great guitar player, to be also a fabulous singer in the old classic Cutie Named Judy, by Jerry McCain. Throughout the whole record, The Howlers sound in great shape and a front man like Dykes could not wish to have a better group of musicians accompanying him. On this particular tune, they succeed beautifully in re-creating an highly entertaining 50's rock type of sound.

The cover of Who Do You Love is perhaps the most intense moment of the album. This celebrated masterpiece, originally from Bo Diddley, is executed so masterfully by The Howlers which, despite the turnover of musicians throughout the years and within the band, manage to mantain a robust and highly refined sound, so intense to sound like a real blues war machine. This version is certainly a true testimony of their musical artistry.

The album closes with another original by Omar & The Howlers, Climb On Board, where Nick Connolly's piano solo stands out in a tune that resembles Western atmospheres and carries an intrinsic message of love and devotion to the band's friends sadly passed in 2014.

"Climb on board and ride this gospel train with me," sings Dykes, almost to invite the listener on this journey made of memories and very personal to Dykes and his band. Omar & The Howlers, once again, have not only made another great record but also created a labour of love and respect for life and that great value which is friendship.

The Kitchen Sink can be purchased as a download via Amazon