Jonathan Burden - Tales From The Alluvial 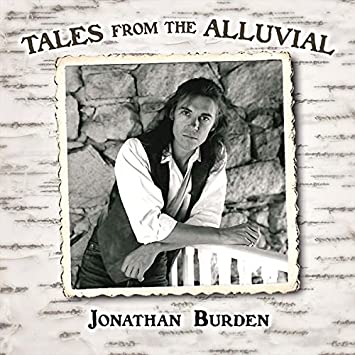 It's always worth, for a music artist, to revisit archives full of their own material that, for a reason or another, has never been released, because you can never be sure of how much goodness one can find, into said archives.

It is a little bit what happened to the British Columbia-based guitarist and singer/songwriter Jonathan Burden, one of the finest Roots/Bluesmen around in the current Canadian music scene, when working on the release of his brand new album.

The past few years that forced the whole world to a stand still, because of the pandemic, have allowed the Canadian artist to delve deep into his musical shelves, where Burden had collected, through the decades, plenty of material recorded either in recent years or a little while ago.

It so happened that Burden stumbled upon a series of songs recorded in the 90's, songs that reflected a slightly different period in the artistic life of the singer/songwriter, where Burden was very much into performing and writing songs of more of a Country/Rock, Folk and Roots type.

The finding was quite a revelation, for Burden. The Canadian artist, through his archive researching, came across to several songs that meant to be part of a record that, rather unfortunately, never saw the light of the day, back then, apart of one song, called Broke Down, that was released the first time around on Burden and his daughter Holly Hyatt's first record together, called Big Wind On The Way.

It needs to be said that, whereas the finding of said songs, which now Burden has released through a rather splendid album called Tales From The Alluvial, might have been a revelation for the artist himself, they are indeed, in our personal view, some of the finest tunes ever written by the guitarist and singer/songwriter, out of Jonathan Burden already rich songbook.

Released in 2021, the 11 songs comprised into Tales From The Alluvial are a marvelous retrospective into Burden's musical roots. The Canadian artist takes the listener through a rather breathtaking rollercoaster into 70's Southern Rock, Folk, Country and Roots, where Jonathan Burden demonstrates in full what a superb songwriter and storyteller he was already more than 3 decades ago, as he is still now.

Tales From The Alluvial also showcases another magnificent aspect of Jonathan Burden's musicianship, which is his vocal delivery. From Reality Strikes to Goin' South and from Over The Skyline to that vocal masterclass that is Homesick Mountain Blues, Burden is literally unstoppable in his singing style, moving effortlessly through different tonalities with elegance, power and unlimited class.

The album's songs are all packed with strong melodies and the fact that they were all recorded in a lo-fi environment, without any addition of click tracks or pitch shift, it certainly helped to elevate the songs' purity and their straight forward recording process.

If you are thinking of buying yourself a present in music that lasts for a lifetime, Tales From The Alluvial is the perfect record for you. Burden is a superb raconteur and his superior guitar playing matches beautifully Burden's all-around abilities, both as a singer and as a songwriter. A must-have record.