Bringing it all back home: Dylan Wins the Noble Prize in Literature

Imagine the surprise of hearing Bob Dylan's raw untrained voice for the very first time back in the mid-60s. Recently the world experienced the same revelation when the famed and coveted Noble Prize in Literature was awarded to Dylan. This was the first time this honor was bestowed upon a musician. (The last "award" hoisted upon him was "spokesman of a generation." One that Dylan refused to accept.) Although his press team acknowledged the award with enthusiasm the iconic singer and songwriter did not speak out about it publicly for several weeks.Subsequently the committee was left in the dark.
On the other end of the spectrum the public and press were thrilled to honor him. This was a watershed moment for both the Noble prize as well as for popular music itself.Yet Dylan chose to remain in the shadows.

A committee statement issued from the chairwoman stated that they would move forward and celebrate the honor, even if Dylan failed to show.
After approximately 2 weeks had passed without any form of communication from Dylan the Prize committee released a statement, indicating that his silence on this occasion could be cited as nothing less than rude(more accurately one member of the committee called Mr. Dylan 'impolite and arrogant'").
Unfortunately the committee does not know the real Bob Dylan.On October 29,Dylan finally broke his silence and stated to the Nobel Prize Committee that he was 'speechless' and was happy to accept the honor. Awesome Bob.

Dylan's writing style is unorthodox in its juxtaposition of everyday colloquialisms, historical events and topics of the day. He combines this with poetic license and "astute personal-revelatory-journalistic-observation." These "Dylan-isms" have more to do with the existential cinematic experience, and the great American novel than any conventional pop song. There is no doubt that Dylan, now a confirmed laureate, has had as much of an impact on the music lyric as the English language itself.

His 1965 epic masterpiece, "Like a Rolling Stone" was hailed by Rolling Stone magazine as number one song of all time, out of a list of 500.And for good reason. Rather than pursue a literal, straightforward writing technique that seemed to embody much of pop, Dylan sought rather to involve the cryptic and obscure as a side car to the literate. This, so as to draw your attention into a deeper and richer stew; subsequently stirring up your imagination (to wit, the image based aspect of the brain). Adding yet another element to the equation still. When one listens to "Like a Rolling Stone" one cannot help but wonder who this person is that Dylan is addressing: "Once upon a time you dressed so fine threw the bums a dime in your prime, didn't you? People call say 'beware doll, you're bound to fall' You thought they were all kidding you." (There are many resources that cite Edie Sedgwick as the person in question.) 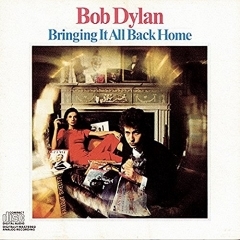 But Dylan is more intent on telling the story whether you get it or not, than having to explain every facet and detail. That route is more of a science project and not a persuasive piece of art. Rather, the singer attempts to bombard the senses with incessant images and seemingly stream of consciousness words, thoughts and ideas. Mystery is key. And what we are left with is something far more satisfying and compelling, both in mind and in heart. And this process takes place on nearly ALL of Dylan's work. (Check out his masterpiece, "Highway 61 Revisited" as an example.)

Dylan, his surname an homage to poet Dylan Thomas, possessed a vocal style (also a salute, in this case to Woody Guthrie) and delivery I might add, that was simultaneously revered and derided when it first made its initial rounds in the 60s. But truth be told, whatever side the average listener gravitated towards, they were forced to admit it was at once recognizable- for better or worse.

Bob Dylan's roots lie in the person of one Mr. Robert Zimmerman. Born into a Jewish household his family hailed from the mid-western state of Minnesota (the very same state that would produce both Prince and Paul Westerberg). He would early on develop an admiration for film star James Dean. (So much so that early publicity shots of Dylan have him perfectly emulating the late film icon.)

Woody Guthrie and the Beat Generation would finally win over Dylan's affections and in the end produce the most influential and discernible vocalist/lyricist the entire music world has ever known.Along the way he would cultivate a lifelong love affair with both the rock and folk music genres; both refining and redefining them in the process.

Some say he was America's nay, the Heartland's response to Shakespeare and potentially had as much mastery over the lyric as the Bard did over the language. (And setting to music whatever he wrote…something Shakespeare was not known for.)

If all he ever penned was "Blowin' in the Wind," this auspicious occasion would still have been justifiable. And although many a naysayer has been left scratching their head in bewilderment, the faithful respond to Bob with a hearty, "Don't Think Twice, It's Alright."