Back To Class Lesson 2: Valerie Simpson 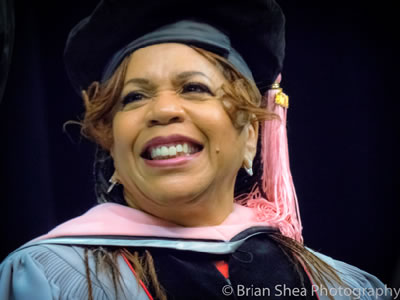 Editor's Note: Congratulations to Valerie Simpson for her Honorary Doctorate in Music bestowed by the Berklee College of Music! Valerie performed in the Berklee Pre-Commencement show that was held by students and faculty to interpret the songs of the honorees and elite guests. It was a privilege for BBR to provide footage for the 2014 Berklee College of Music Commencement Ceremony the next day. All events were closed to the public. Jimmy Page called Valerie Simpson's performance, "Superb." When we heard of this fabulous event, we asked Motown drummer, producer, writer, Drew Schultz, to take some time from his busy performance schedule, and post an in depth article on Valerie - now known as Dr. Simpson.

When these first words from the first track of Valerie Simpson's first solo album rang out acapella in 1971, it was a completely new message that was being sent across the wires. "I Don't Need No Help" was a clear statement that Ms. Simpson was stepping out on her own, as she had spent the better part of a decade as a heavy hitter behind the scenes. In 1964 she had met a young singer and songwriter named Nickolas Ashford, whose name would personally and professionally go hand in hand with Simpson's from then on. The powerhouse Ashford & Simpson duo found early success writing for artists on the Scepter/Wand Records roster including Chuck Jackson, Maxine Brown, and The Shirelles. Teaming up with soul songstress Jo Armstead, Ashford & Simpson had their first huge hit with a quirky composition entitled "Let's Go Get Stoned." Although the song was originally recorded by The Coasters in 1965, it was the following year when the song broke out with a hit version by Ray Charles. The song is a laid back, appropriately lazy sounding groove with bluesy piano, organ, and guitar licks accenting Ray's soulful vocals.

The success of "Let's Go Get Stoned" afforded Ashford, Simpson, and Armstead the opportunity to write a follow up release for Ray Charles. This next collaboration produced the single "I Don't Need No Doctor," a bouncy blues tune with a honking baritone saxophone and clever, playful style of lyricism that would become a staple of Ashford & Simpson's writing. These two Ray Charles songs would go on to become classics with "Stoned" being covered by artists including James Brown, Booker T. & The MGs, Joe Cocker, Big Mama Thornton, The Derek Trucks Band, and Billy Preston, while renditions of "I Don't Need No Doctor" have been recorded by Humble Pie, Styx, John Scofield, Joan Osborne, and John Mayer.

Having scored multiple hits in such a short period of time, Ashford & Simpson were suddenly on the radar screen of Motown Records, one of the biggest powerhouses in soul music. After sitting down at a talent scouting meeting with the iconicsongwriting team Holland/Dozier/Holland, Ashford & Simpson were offered a position as staff songwriters at Motown. While Jo Armstead decided to settle in Chicago with her husband, Ashford & Simpson accepted the offer and joined the staff at Hitsville USA. Their first assignment was to write material for the newly paired singing duo of Marvin Gaye and Tammi Terrell. Marvin Gaye had previously found success singing duets with Motowners including Mary Wells and Kim Weston, but the chemistry between Gaye and Terrell was undeniably electric, and Ashford & Simpson were able to capture that spark. Between 1966 and 1970, Ashford & Simpson were responsible for a jaw dropping string of hits on Marvin & Tammi, including "Your Precious Love," "Ain't Nothing Like The Real Thing," "You're All I Need To Get By," "Good Lovin' Ain't Easy To Come By," "Keep On Lovin' Me Honey," "The Onion Song," and the everlasting "Ain't No Mountain High Enough."

By the mid-sixties, Motown was well known for operating in a similar fashion to the automotive assembly lines in the Motor City, with writers, producers, singers, musicians, arrangers, and administrative staff all having their own duties, rarely acting as more than one part of the creative process. However, with the undeniable hit of "Ain't No Mountain," Ashford & Simpson were granted an opportunity to both write and produce for Marvin and Tammi, and most of the songs listed above bear marks of their production - crisp arrangements, lush string and woodwind orchestration, and powerful piano parts played by Valerie Simpson herself. Motown session keyboardist Earl Van Dyke of The Funk Brothers was notorious for playing the piano with forceful aggression, and on many Ashford & Simpson productions Valerie gives Earl a run for his money.

Having proven themselves as unstoppable writers and producers, Ashford & Simpson were presented with a daunting opportunity in 1970 with Diana Ross' departure from The Supremes. Throughout the sixties, Diana Ross & The Supremes had been one of the flagship hit making groups of Motown's artist roster, and the newsworthy announcement of Ross stepping out for a solo career was paired with the release of the smash hit single "Someday We'll Be Together." Looking to release a debut album full of strong material to follow the success of "Someday," Ross chose Ashford & Simpson to be the writers and producers for her first solo LP. Save for one track on the album, the self titled Diana Ross LP was entirely written and produced by the duo, with the singles "Reach Out And Touch (Somebody's Hand)" and a new arrangement of "Ain't No Mountain High Enough" solidly cementing Ross as a solo artist. Ross' new version of "Ain't No Mountain," with it's spoken word interludes, soaring instrumentation, and building intensity was so successful that later pressings of the LP would be re-released as "Ain't No Mountain High Enough."

Ashford & Simpson would go on to write and produce the bulk of the Diana Ross Surrender album, continuing their string of hit releases. However, during this time Valerie Simpson made a daring move within the company and struck out on her own as a solo artist, releasing her first LP entitled Valerie Simpson Exposed. This record placed Valerie in the rare ranks of Motown employees who worked as songwriters, producers, musicians, and solo artists alongside Stevie Wonder and Marvin Gaye. It was the Exposed LP that included the song "I Don't Need No Help," featuring only Valerie's vocals and piano playing. The album featured fantastic singing and playing by Valerie, plus some of the most intricate rhythm section arrangements that Motown's studio recording band, The Funk Brothers, ever put on vinyl. Songs such as "Sinner Man" featured the layering of multiple guitarists, two drummers, two hand percussionists, piano and organ, bass guitar, plus full horn and string arrangements. The following year saw the release of a self titled follow up Valerie Simpson solo album.

Unfortunately, Simpson's two solo albums did not receive much publicity and promotion from Motown, and the label refused to release a proposed album of Ashford & Simpson singing their own versions of hits they had written for other artists. As a result, the duo decided to part ways with Motown in 1973. They signed to Warner Brothers Records as artists themselves, releasing an album of self-sung duets called Gimme Something Real. Thus began an entirely new career phase as artists in their own right. Gimme Something Real saw the return of Jo Armstead who contributed writing and background vocals to the album, and Ashford & Simpson brought in several Motown regulars including longtime arranger Paul Riser, Funk Brothers' bassist Bob Babbitt, and drummer Andrew Smith. The following year the duo went from the studio to the steeple, marrying into what would be a lifelong partnership. This album was the first in a long tenure at Warner Brothers, resulting in nine albums, with all but one hitting the top 40 of the US R&B charts. Their best selling Warner Brothers album was 1978's Is It Still Good To Ya?, which featured the eponymous hit single, a sentimental ballad with clever harmonies and a gospel inflection that builds into a hard driving chorus at the song's end. Teddy Pendergrass would cover the song a few years later on his seminal 1980 record TP.

1982 saw Ashford & Simpson move to Capitol Records, where they recorded another five albums. This move saw their biggest hit as artists, 1984's "Solid." The single, taken of the LP of the same name, is an eighties romp complete with synth bass, an early drum machine, and lyrics celebrating their long-lasting personal and professional relationship.

After their tenure at Capitol Records, Ashford & Simpson continued to occasionally record, releasing albums in 1996 and 2009, while touring and appearing consistently in television specials and tributes including 2005's From The Heart: The Four Tops' 50th Anniversary. In 2009 they re-recorded "Solid" in honor of the inauguration of Barack Obama, retitling the song "Solid (As Barack)." In August of 2011, after almost 50 years of partnership, Nick Ashford passed away from complications of threat cancer. Since then, Valerie has released a new solo album entitled Dinosaurs Are Coming Back Again, featuring some of the last recordings of Nick Ashford on background vocals, and a remade instrumental arrangement of "Ain't No Mountain High Enough." She has continued to perform, and is committed to continuing on in the spirit of her husband, keeping the music alive.

About The Drew Schultz Back To Class Blog:

Drummer, producer, songwriter, and soul music fanatic, Drew Schultz, shares his experiences recording and performing with Motown and R&B legends, and defines his favorite tracks by the stars that he's worked with. His "Back To Class" project is a series of original songs performed by these iconic artists, raising funds for public school music programs in Detroit. 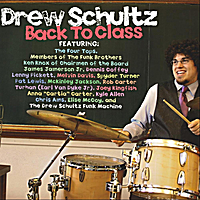 You can find Drew at www.DSdrums.com.

"Back To Class" is available on iTunes, Amazon, Spotify, and more.