Photos and Review by Bluebird. 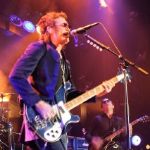 Glenn Hughes, Joe Bonamassa, Derek Sherinian and Jason Bonham. Elegant and explosive, wild and restrained, professional and engaging, they presented a show to a sold out crowd in New Hampshire on Friday night that exceeded the expectations of some very experienced rock fans of all ages.

They set out to tour the US coast to coast, just days after the release of their second album, BCC 2. Their first album was debuted September, 2010. Each of these musicians with full careers of their own, has pulled together their collective talents and experience to create a new sound that has key elements of classic blues guitar, poignant bass lines, progressive/fusion keyboarding, and legendary drum arrangements.  Powerful vocals from Hughes and Bonamassa prevail and are mixed with harmony pieces from the band as well. Experienced listeners can't help but hear the flavors, echos, feel of their favorite bands from which these musicians come, Led Zeppelin, Deep Purple, Trapeze, Dream Theatre, and more, are of influence, yet all the while a modern sound is in your face.

For a brief bio of the members of Black Country Communion and an album review of BCC1 read here:
http://www.bluebirdreviews.com/album-reviews/82-album-review-black-country-communion-1.html 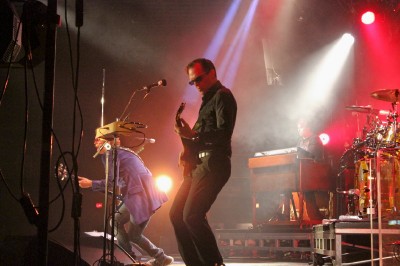 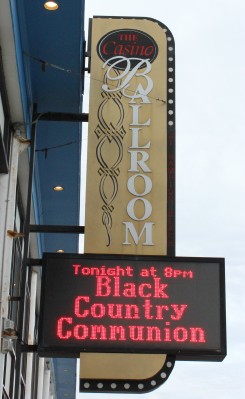 The Hampton Beach Casino Ballroom is an 'unofficial' historic venue for the locals in the Hampton New Hampshire area that was built by Wallace D. Lowell. It opened on July 15, 1899. Its origins date back to when the word 'casino' had little to do with gambling. The Italian word actually means 'summer house' and the builders at that time wanted to create a space for travelers to relax and enjoy entertainment as well as lodging.
(From Casino Ballroom History: http://www.casino ballroom.com/history.php )

I received my BCC 2 pre-order and read/heard in some of the band interviews that the album was written to be played live. I listened to it constantly before the show, with a special ear for the song, "Save Me," because Jason Bonham has stated in several interviews that this song had its origins as a possible tour number for Led Zeppelin after the 2007 O2 show. But when Zep decided not to tour, the song was given to Jason and finished by BCC for their second album.

I like the power ballads of BCC; Song of Yesterday, Medusa, and from their new album, the Battle of Hadrian's Wall and Ordinary Son, have really moved me, captured my attention. My favorite song however, is Beggarman, just because of the ever-so-funky Hughes bass line that runs through the entire number. Oh - and Man in the Middle - I had to stop listening to it while I was driving, because a driver's license is a privilege, not a right, you know.

The crowd was a wide range of ages and a good dose of classic rockers with some metal edges too. I saw a lot of Iron Maiden shirts, Trapeze fans, Deep Purple tees and of course, people were sporting new BCC t-shirts too. The venue was set up with tables and chairs on the entire floor which made it difficult to move around, but fans could eat and drink all night with waitress service.

I've heard from other fans that this venue has had a full GA floor without tables, and at times made it more cohesive for the audience to respond to the band. Glenn Hughes had it his way, though, a few times throughout the show he would shout, "STAND UP NEW HAMPSHIRE !" 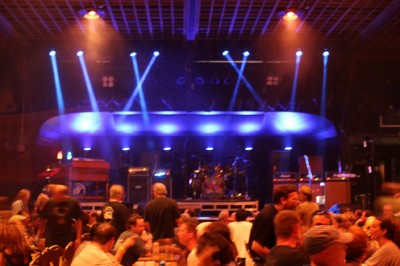 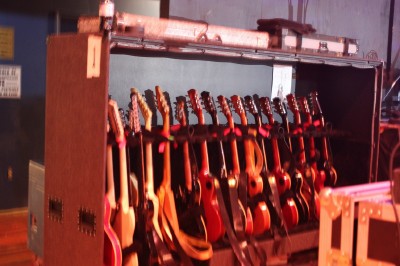 The show opened with a dark stage and a classical overture. The acoustics were great and they went right in to the song Black Country. "New Hampshire C'MON!" yelled Hughes, "We are BCC" he said proudly. "So happy to be back where we all live." Glenn's facial expressions are priceless and he strutted his famous cool-rock-star-neck-stretched-out-pout walk around the stage all night. And he smiled, all were smiling all night, working off each other and seemed to be having a great time.

Joe Bonamassa showed his mastery with fiery blues and rock guitar work that never stopped. His range of rhythmic pieces, power ballads and straight melt your face rock was great for the live audience. The Battle for Hadrian's Wall and Song of Yesterday was a ride of magic and lore with his vocals and the arrangements of the band mixed brilliantly. BCC is in a heap of trouble with me, because now I expect masterpieces with every album. 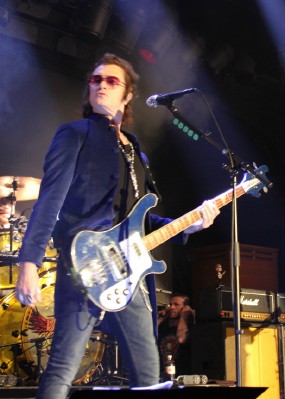 "We are building the foundation of Rock n Roll" Hughes shouted numerous times during the night. He stood at the edge of the stage with his arms outstretched and raised the crowd up to their feet, louder, more engaged. It didn't matter that you were sitting in a chair, standing near a chair or tied to a chair, you were up and wanted to be part of this 'communion'.

Sherinian did a keyboard piece that sounded like a guitar solo from Eddie Van Halen. He worked beautiful accents to some of the songs such as Songs of Yesterday that sounded like a flute was playing. Other times his keyboard was reminiscent of a blues organ that gave rise to the soul vibes of the early 1970's. Magnificent !

When Hughes announced the song, "Cold" he said it was a 'Song of life and death and what happens in the middle." "We can go north, south, this is a song about going south." As much as Hughes wants to preface this new album as 'darker' than the first, I think even in the face of melancholic lyrics, the arrangements preserve the spirit. In this live version, "Cold" picked up the pace a bit with a faster bass line and a crisp solo from Bonamassa.

The Battle of John Henry was played tonight, a Joe Bonamassa solo classic. The song is about the folk hero of the working class. This made sense to me, because the theme of Black Country Communion has been a tribute to the industrial families from the Black Country region of England right from the start. Be it British or American, these band members remember their roots and because of this, we honor our own. 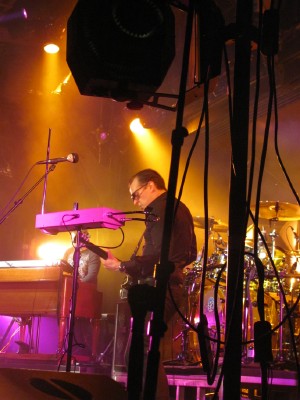 Hughes, Sherinian and Bonham played it well. Hughes rises up, with his mouth wide open, angles his bass up and down, encouraging the crowd to clap. He jumped up and down in his canvas sneakers. The voices of Hughes and Bonamassa are complimentary of each other and soulful in their own style.

Joe Bonamassa, hammering away is technically proficient and tirelessly focuses on his craft. He and Bonham fell into an almost duet during the Battle of John Henry and it was remarkable. His solos are always complicated to reflect his brilliant musicianship, yet they are never self indulgent. I love Bonamassa's guitar work because his playing is crisp regardless of the complexity. I can hear every note when he plays it, even if he is playing a thousand notes per second.

There were some fantastic solos tonight. Jason Bonham's timing and power lends volume and structure, excitement to these pieces. He dominated Smokestack Woman and had a brief solo. Sweet Sista Jane drew solos from all band members, playing off each other. It is the excitement of arena rock again ! 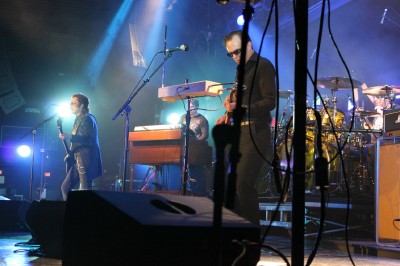 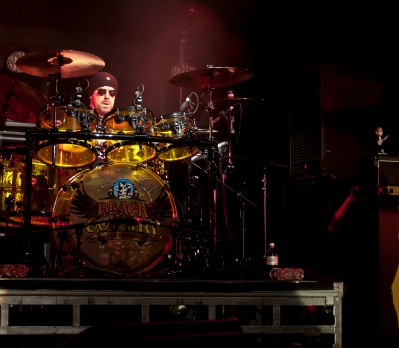 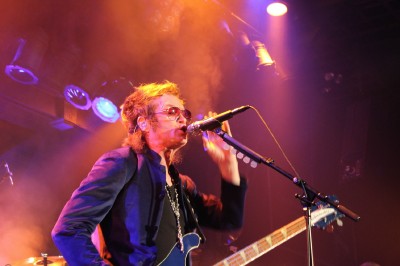 Hughes, "New Hampshire, WE LOVE YOU, WE ARE BCC !"

The encore started with Man in the Middle and Glenn shouted, "I wanna see everyone stand up!" Then they went right into the Deep Purple song, "Burn" and I walked around the venue and watched all of these fine people blend together into a mass of happy rock hysteria; everyone on their feet, Glenn belting it all out, the band on fire. It was truly fantastic. 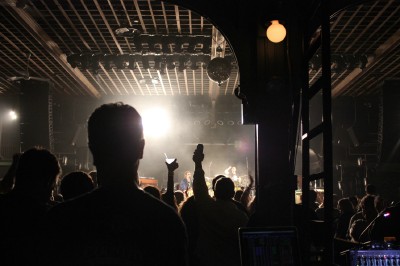 Glenn closed the show with a very warm and gracious message, "Brothers and sisters, we are so honored to be here tonight. We applaud you, God Bless You All, Long Live Rock and Roll!" He introduced Joe Bonamassa and Derek Sherinian and the crowd roared. As he introduced Jason Bonham he said,  "... and this is the son of my best friend ... "

... and just as I was about to tear up, thinking of John Henry Bonham and appreciating this love of music, Glenn Hughes yelled to the crowd, "You can call me Papa - I love you, Man !"