The Cult: Choice of Weapon 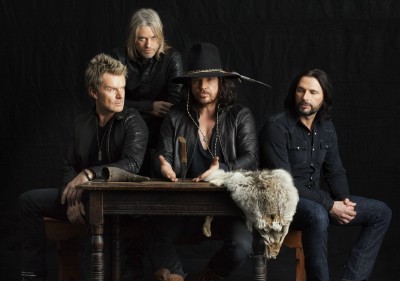 The Cult: CHOICE OF WEAPON

It's a cataclysmic blast!

"My wild Indian
heart was pounding, I was running so fast..."

From lyrics: "Honey from a Knife"

Singer, Ian Astbury digs deep into his lyrical repartee, while Billy Duffy cranks the guitar repertoires. Backed by drummer John Tempesta and bassist Chris Wyse, Choice of Weapon is a musical joust. The Cult's straight-shooter opener, "Honey from a Knife" pulsates in a rhythmical beat that propels you forward and into the next beautiful song, "Elemental Light".  Fueled by Duffy's eclectic guitar skill, every song vibrates with Ian's haunting, shamanic voice - taking you on a magical ride - from the spell of "Lucifer" to the amazing "Wilderness Now" to the visional "The Night in the City Forever".

Choice of Weapon is a perfect arrangement of musical craftiness that barrages the senses each and every time you listen.  It's an extraordinary showcase of the Cult's long running span as a group. Both die-hard and casual Cult listeners will enjoy:  push play and repeat!

1. Honey From A Knife

10. The Night In The City Forever

Do you know The Cult? Read their full biography as published by their media team:

Born out of the ashes of the UK post-punk scene, The Cult evolved to become one of the most influential and controversial rock bands of the late 20th century, selling millions of albums, headlining arenas and stadiums around the world, infusing innovative possibilities into the worlds of music and art, and quickly ascending through the ranks of the indie music world to achieve global status. As early as its first American tour in 1984, The Cult became one of the handful of important bands in the U.S. post-modern and hard rock communities. The band was embraced by the lost children of The Doors and Velvet Underground, and a generation that was waking up to the influence of 60s and 70s rock icons like Led Zeppelin, The New York Dolls and David Bowie. Formed in Brixton, London in 1983 as Death Cult, The Cult’s music transformed from punk rock to post-punk, psychedelia, heavy dance music, and transcendental hard rock. As one journalist noted, “Using a few simple riffs and images, The Cult creates an entire environment, one more exciting and stimulating than our own.” And that may just be what separates The Cult from other artists. Imagery is all-important to vocalist/lyricist Ian Astbury, imagery in the music and in the art that accompanies the Cult’s projects. Astbury is attracted to words and the image that each word creates. He is engaged by the power of nature, folklore, the concept of destiny, animal power symbols, the survival of the species, spirituality, and certainly the Native American myth and culture, a subject of many of The Cult’s songs. The constant core of The Cult is Astbury and guitarist/composer Billy Duffy. Attitude incarnate, the chemistry between these two vastly different artists - equal-parts genuine affection and palpable tension - remains the source of their long-standing partnership. Duffy grounds Astbury’s esoteric side with a hard rock perspective, and there is no doubt that at all times, these two have each other’s backs. In 2011, The Cult – Astbury, Duffy, drummer John Tempesta and bassist Chris Wyse – recorded Choice of Weapon, the band’s first new studio album in five years, set for a May 22, 2012 release date on Cooking Vinyl Records. Long-time Cult collaborator and producer Bob Rock put the finishing touches on the foundations that were laid by producer Chris Goss. The album’s 10 tracks, reveal the band at its rawest and most visceral, encapsulating cinematic visions and themes of love, revolt and redemption. According to Astbury, “We don’t have fans, we have devotees. You either need it or you don’t. You either get it or you won’t. There is nothing casual about The Cult.”

Click here for the media stream of "For The Animals."

Watch The Cult's New Video for the single release, "For The Animals."

Ian Astbury speaks about the video, "For The Animals," as published by their media team:

Frontman Ian Astbury says about the video:  “’For The Animals’ is a metaphor about people existing in a realm that is outside of structured society and outside of what cultural editors deem to be important or relevant.  It could be the feral punk rock kids squatting in abandoned homes or the spirited individual who has little regard for social conventions. It’s for people who choose not to tow the party line or try to fit in. It’s for the free-thinkers and mavericks who are creative and dynamic.”

With the video, The Cult has captured the rising tensions and frustration of a growing group of disenfranchised youth. The provocative clip, from visionary director Michelle Peerali and starring actress Hanna Mosqueda as the lead character, portrays the 19-year-old protagonist transforming from a lost and abandoned youth, overwhelmed by the state of the world large and at her own poor economic status and broken family at home, into an empowered strong woman who finds her inner strength in the end.

And catch up on the other albums from The Cult

THE CULT ON TOUR:

On these North American dates, fans can expect classics as well as some of their new songs, including "Lucifer" - not a song about the devil, but a reference to the morning star, the idea of a journey through darkness and decadence to find the road to wisdom; "Honey From a Knife" - based on the Buddhist teaching about the seductiveness of addiction; and "For The Animals," the first official single from Choice of Weapon. "For The Animals" asserts the rising tensions, the rage and hostility of the growing group of disenfranchised youth in our society.

"Again, we find ourselves with our backs against the wall," Astbury continued, "and we like that, we like being outside the perimeter.
We're the long shot, so place your bet on us."

Visit www.thecult.us/main/shows for all details and to purchase tickets.

More albums from The Cult at Amazon

About The Review Author:

S.A. Hussey is a freelance writer and novelist who contributes to Bluebirdreviews and other sites around the web. Visit her blog at:  http://planted-n-paged.blogspot.com/