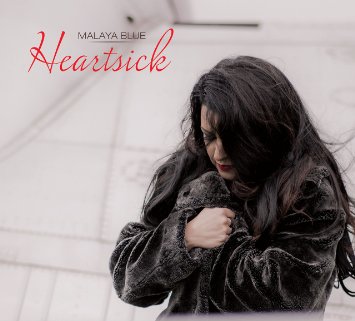 The second album is something that many artists notoriously fear. Malaya Blue from Norwich, United Kingdom must have been feeling in the same way, after the English music press praised her debut album Bourbon Street.

Instead, Malaya Blue followed her own instinct and wrote an album very personal, without falling into the temptation of going for big pomps and circumstances,lyrically and musically but rather doing what the English artist does best, writing and singing from the heart.

Heartsick, Malaya Blue's new album is a record inspired, as the title may suggest, by the many matters of the heart. The record is a delicate blend of soul and jazz and offers many inspired moments, not just through the beautiful and intense voice of the English singer/songwriter but also from the great skills of all the studio musicians playing in the album.

From a songwriting aspect, Heartsick is a definite step forward for Malaya Blue, either when the artist sings about the bitter feelings coming from the end of a relationship, like in the song Acceptance or when singing about how hard work in life always pays off, in that splendid,  soulful track that it is I Have Arrived.

When Heartsick turns to a more jazzy sound, those are the musical territories on the album where Malaya Blue's voice extrapolates all its brilliancy. Hunny Little Dream, Color Blind and Share The Love showcase the best vocal parts of the album, where Blue's voice really goes up a notch in terms of quality and power of her delivery.

Perhaps, the only minute little floor in Heartsick is the lack of more uptempo tunes throughout the album, which is a pity, given how wonderful and eclectic Malaya Blue's voice is.

Still, Malaya Blue's new album is excellently written, produced and played. Heartsick showcases not just a classy album but also an artist in constant evolution, both as a singer and songwriter. As the Norwich-based artist sings in one of her songs: "I have arrived, I might be late, but I'm through that gate". If Blue was referring to the gate to global music stardom, through this new album, she has certainly got all the rights in the world to get through it.