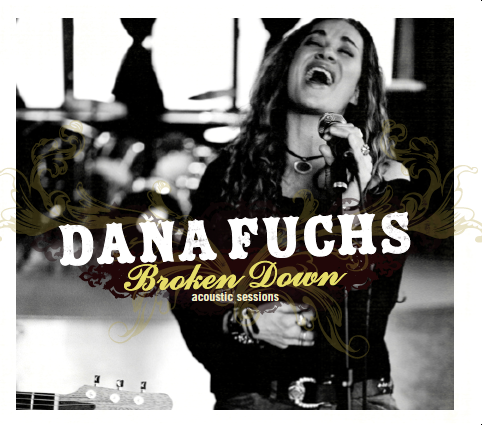 Broken Down is an album that meant to be made, maybe through divine intervention. The new album by Dana Fuchs is her first acoustic record, a record that Fuchs' fans wanted for a very long time. The central theme of the album came up by pure accident during the recording session, simply by staring at photos of some of Fuchs' family members, sadly passed away prematurily.

The American Artist has always had a very close relationship with her family and such personal losses made a big effect on the New York based singer/songwriter's soul. Being on Tour has been a kind of antidote for Dana Fuchs in the last couple of years, able to discharge her sorrow night after night on stage, with her devoted fans and her band. Broken Down encapsules 14 stripped-to-the-bone songs, some of them brand new, other previously released on early albums plus the cover of Ain't No Love In The Heart Of The City.

The album, as mentioned by Fuchs on the sleeve notes, is a meditation in music on love and loss on a deep, personal level. Lyrically, Dana Fuchs explores the life journey she has been through in the last couple of years with the usual, unique intensity and honesty that have been some of the trademarks of her career, together with her powerful, beautiful voice. There are songs about holding memories of the past, although painful sometimes (Keepsake, What Went Right), which the American Artist knows to be the only recipe she knows to hold on to the meaning of life. Dana Fuchs sings with her heart and soul on each song, no matter whether it is about sufference and loss (Moment Away) or love (Kind Of Love).

Jon Diamond, Fuchs' Compadre of a lifetime, shows his craftmanship once again in co-producing the album (together with Fuchs), playing acoustic/electric guitars and harmonica beautifully. One of Diamond's big merit is to be able to read and feel Fuchs' inner feelings like no other and, as a consequence, to complete musically Fuchs' outstanding singing style on the album.

The closing tracks of the record are particularly moving. Misery, a demo that Fuchs made some time ago and never saw the light of the day until now, shows a woman that is trying hard to get back on her feet, still living the pain of her personal losses ("Are you just like me? Holding on to misery... You need someone to believe in).

Dana Fuchs has announced recently to the press that she will take some time off from touring, before the Winter Tour and given what she has been through, that is perfectly understandable. This beautiful acoustic album has allowed the singer/songwriter to express and let go, under the art form she likes the most, all the pain Fuchs has been through and still going. It is not a coincidence that in Sad Salvation, the song that closes the record, there are lyrics such as "She smiles at the children selling candy on the street, remembers the good old days, a life so bittersweet. Listens to the schoolgirls sing their songs a little louder and with the weight of the world she walks a little prouder".

Dana Fuchs has got all the right to feel that pride, especially on this record. With Broken Down, Fuchs has been able to frame a crucial, although sad part of her life on a special record like this and, at the same time, to gift her fans with a body of work of incredible intensity. Broken Down is food for soul and a beautiful portrait of true artistry and poetry.