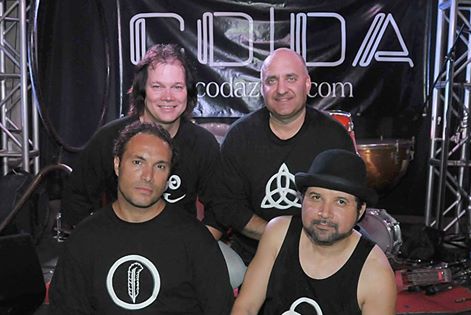 The owner/editor of the Led Zeppelin Ultimate Fan Page has graciously posted her series of interviews, talking with Led Zeppelin tribute bands from around the world! Here is an excerpt of her interview with Canadian Led Zeppelin Tribute Band, CODA:

Canada is known for its maple syrup, strangely coloured money, and hockey. When you think of Led Zeppelin you don't think of Canada do you? But surprise, there is a hidden gem in Canada.. CODA - The Raw Led Zeppelin Experience. Formed in January 2006, CODA has been playing consistently throughout the Greater Toronto area ever since.

Calling Toronto, Ontario, home, CODA performs the Led Zeppelin classics with pride, heart and soul. They admire and respect the music and the musicians behind it. There's no costumes, no wigs, just straight rock and roll by guys who love to play the music. They've rubbed shoulders with Jason Bonham and the Golden God himself, Robert Plant. They are first, fans of the music, then musicians. When you combine the two, as a fan at one of their shows, you will experience something you won't soon forget.

I was excited to reach out, to my 'neighbours', to do this interview. They embraced the opportunity and I couldn't be any more excited to share their answers with you all. Without further ado, may I present to you...CODA - The Raw Led Zeppelin Experience.

LZUFP~ There are many Led Zeppelin tribute bands from all over the world. What is it like being one of the very few Canadian ones? What do you think makes you stand out to the counterparts?

Robert: For me it's an honor to be one of the few Canadian Led Zeppelin tribute bands around. Although there are more of us Canadian Led Zep tribute bands out there than I would like! LOL! Competition is fierce! With that said, it makes it difficult to set yourself apart from the others. There are those who assume the costume look. There are also those who are going after the live feel, as well as those who are claiming a note for note band. What CODA is doing, is bringing a bit of the studio rendition, mixed with live recordings taken from various touring years. Whether it be 1970, 1971, or 1973, etc. With certain songs, I like to do a little storytelling. As an example, I like to mention how Robert and Jimmy loved Joan Baez's version of 'Babe I'm Gonna Leave You' so much, they covered the song on the very first Led Zeppelin album.

Kelly: It's a great thing being one of the few Canadian ones out there. Shows Canada has got talent lol! CODA stands out because nothing is hacked when we play. It's all pre-studied from the live, to the boots to the studio recordings.

Paul: I was looking for a tribute band that was doing either Led Zeppelin, Yes, or Alice Cooper. I answered an ad that CODA placed in Now Magazine online and that's how I found my first choice. When we played together the four of us clicked musically and after playing a number of shows with the boys, I knew that this was the right band for me. CODA is different than many Led Zeppelin tribute acts in that, we do not try to look like Jimmy, John Paul, John and Robert...we are much more interested in sounding like them in our own way. It's four guys playing our hearts out to recreate the live, raw and heavy Led Zeppelin experience.

Kelly: It would have to be 'The Song Remains the Same' the movie. Seeing that movie just made me do a complete 360 turn in playing on a 'smaller kit' and learning Bonham's style of drumming. I would have to say 'Kashmir' because of the drive and spiritual/magical sound it has behind it.

LZUFP~ Growing up not far from Toronto, I would listen to Q107. I also grew up watching Muchmusic. Nowadays, the radio and video channels have strayed from the real rock and roll. How does that make you feel that currently it's all about the hip hop, rap, pop music? Would you like to see more classic rock artists on it, to expose a whole new generation to it?

Robert: Well, I have no problem with Hip Hop/Rap/Pop music at all. As long as it's good. Meaning, a good feel to the music or lyrics that speak to you on a personal or global level. Music comes in different forms. What is most important about music is when it speaks to a generation. That is what gives it a legacy, that will give it its own life to connect to following generations. I grew up with Muchmusic, when it was born. When it began, it was all about music videos. I loved coming home from school to see the latest video and what it would be all about. Then digesting it and discussing it with my friends. Now it seems it's all about Jersey Shore and the Real World shows! LOL! But every now and then a group will come out with a decent Rock song, and you will hear in their music something reminiscent of Led Zeppelin. Then in an interview you will hear them say how Led Zeppelin was an influence on them. Their fans will take that and discover Led Zeppelin on their own. Dave Grohl is a perfect example of that.

Paul: As the demographics change so does the broadcast of commercial music. The younger generation has a way of discovering the great music from the 60's and 70's on their own terms. I think it is much cooler that they discover this on their own so when they do find something special it is theirs and they have their own relationship with it. That was the way I felt when I found my favourite bands in the 70's. There are so many really cool bands out there now that I am discovering through my kids, bands like Animal Collective, Wolfmother, Cancer Bats, Billy Talent, Structure, Suicide Silence, Devil Wears Prada, and on and on. Kids have to find the music that they can relate to and it is best when they find it on their own means as that makes it even more special, magical and personal when they find it.

Kelly: I don't listen to that type of music since it really does nothing for me. But I think some stations should go back to the roots of classic rock and get the younger crowd familiar with what and where it all started.

To read the entire interview of CODA- The Raw Led Zeppelin Experience, visit : 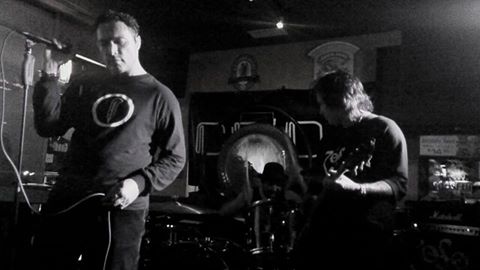 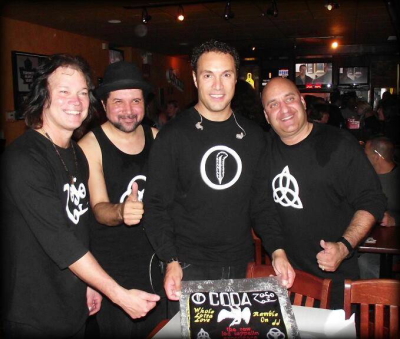 Extra special thanks to Kelly, Robert, Paul and Rick for an exciting interview. I have learned so much about you all, your love of Zeppelin and the great pride and dedication you put into each show. It's great to see my fellow Canucks 'Getting the Led Out'.

Photo (and CAKE!) by LZUFP Blogspot.

Be sure to check out Coda's official website for tour dates, booking information, biographies, photo galleries and more.

Check out Coda on:

The Paul Mathur Project can be found here: